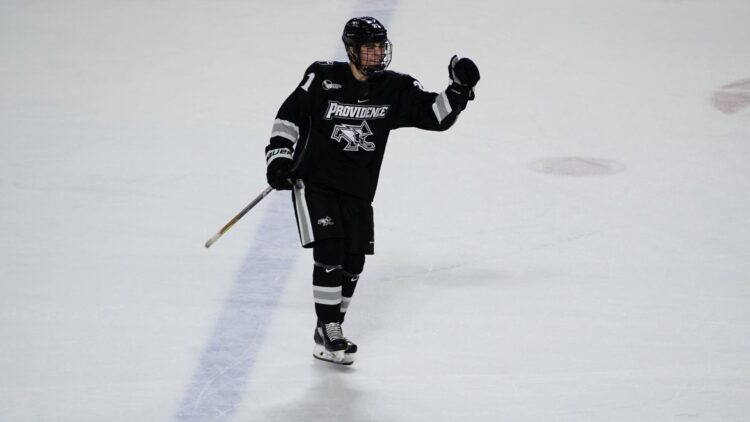 We continue the 2022 Rangers Top 25 Under 25 with number 15-11, and we start getting into potential roster players this year. The ground rules for this list are simple. To qualify, a player must be under 25 years old. It doesn’t matter if this player is in the NHL, AHL, or in any of the leagues around the world. If they are Ranger property and under 25, they were considered.

One note on numbers 15-11: I had a lot of trouble trying to find the right order for this group. I still don’t think I got it right. You can put them in any order you want based on personal preference, but all of them are solid prospects who should see some NHL time as they develop.

The biggest mover on this year’s list is Dylan Garand, going from honorable mention all the way to #15. He’d be higher too, but goalies are voodoo and we’ve seen instances of goalies with strong CHL numbers completely whiff in the AHL (Brandon Halverson). 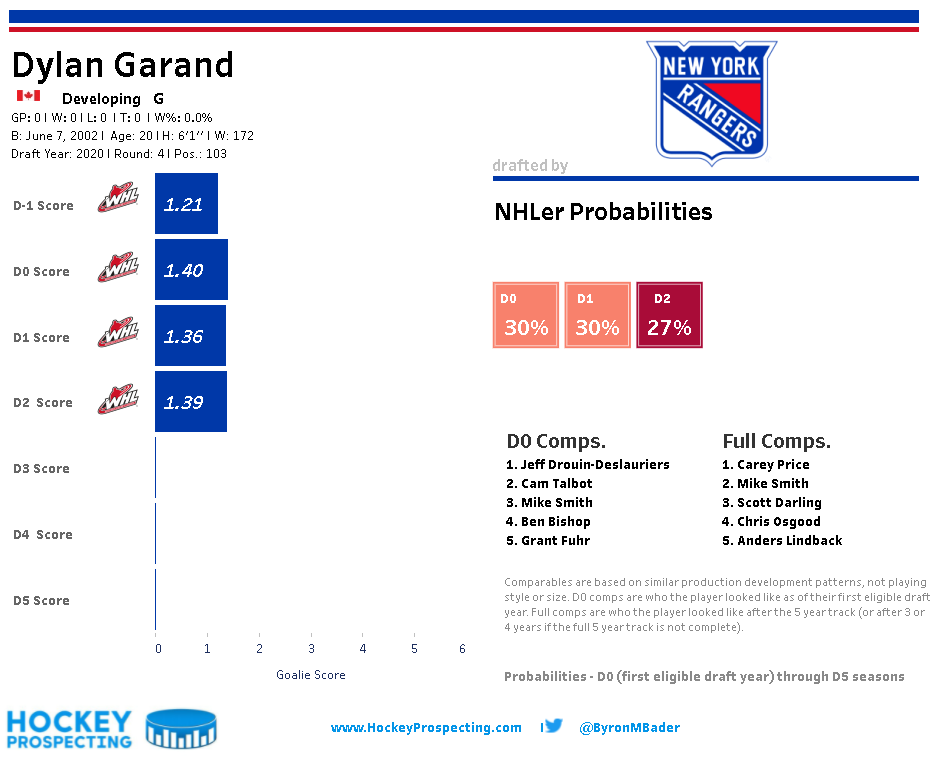 Garand put up insane numbers the last two years, with a .921 SV% in a Covid shortened 2021-2022 season and a .925 SV% last season over 45 games. Garand carried Kamloops to the WHL Semi Final, before getting stunned by Matt Rempe’s Seattle Thunderbirds.

Garand will likely be the starter in Hartford this season on what is hopefully a much improved Wolf Pack team.

The other big mover this year, Brett Berard seems like he was born to play on Broadway. After a ‘meh’ first year with Providence College, Berard exploded onto the scene last season with 18 goals and 38 points in 36 games. Berard has that offensive touch, but is an absolute pest and the Energizer Bunny on the ice. 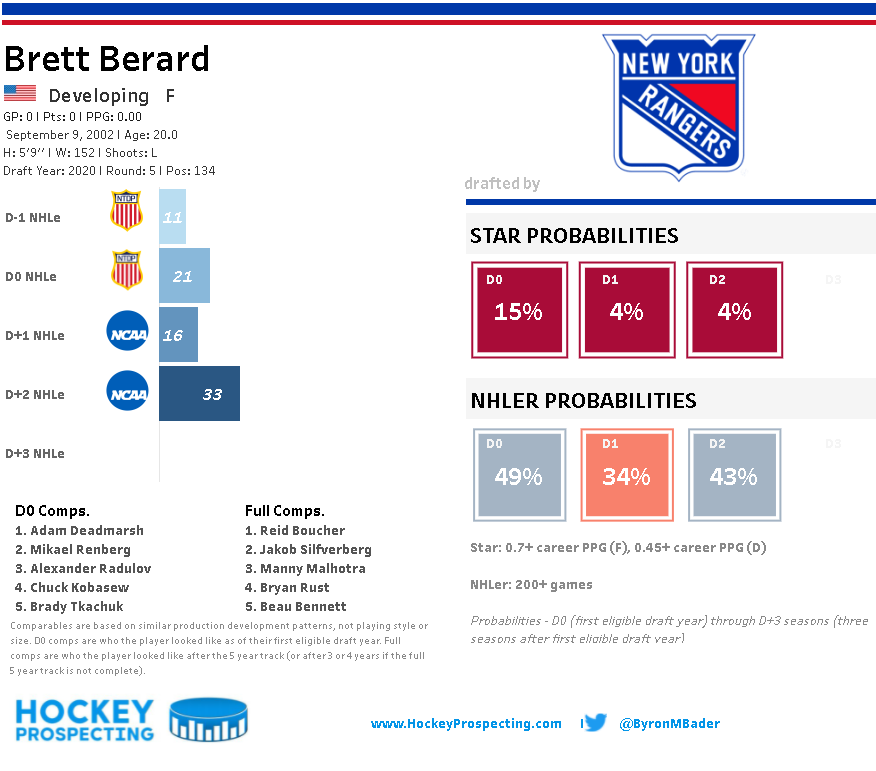 Berard may be short, but he’s strong on his skates, is a very quick skater, and gets to the dirty areas. If he were taller, he likely would’ve been a higher pick, but height is not a precursor to a solid NHL career. Just look at Mats Zuccarello. Berard has the skill and the strength to make it, and it’s clear the Rangers value him as one of their top prospects.

Berard will play this year with Providence, and it is expected that he will turn pro next season, potentially playing a few games with Hartford on an ATO at the end of the NCAA season this year.

Matthew Robertson takes a step back on the list, but it has nothing to do with anything he did or didn’t do. The guys ahead of him simply made huge jumps and have higher ceilings. As mentioned above, I do weight ceiling more than NHL readiness for the kids that haven’t made it to The Show yet. 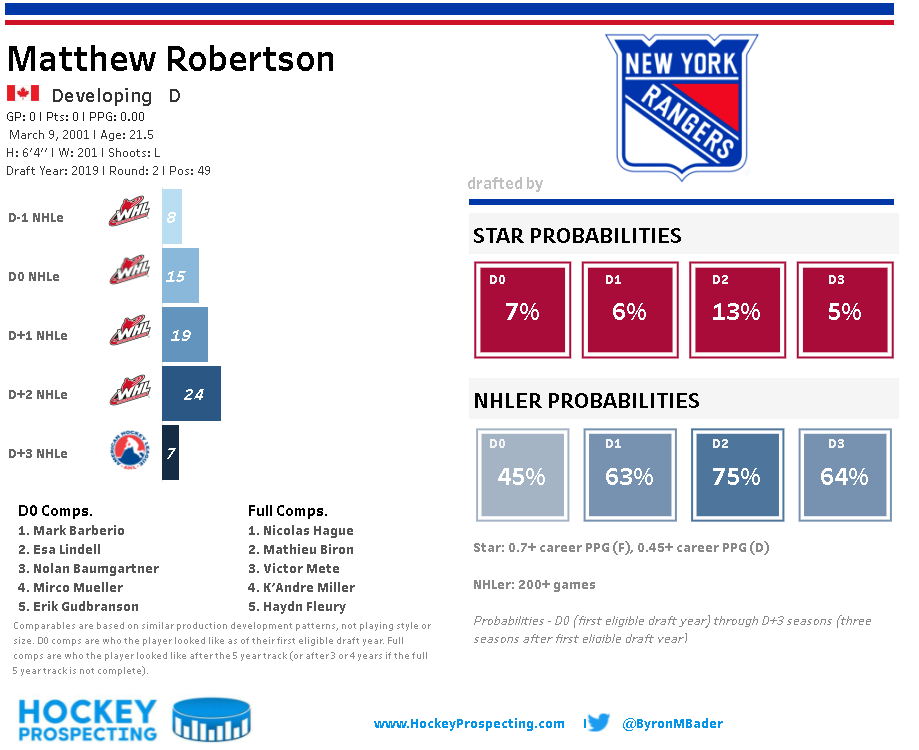 That said, Robertson is just an overall steady and solid defenseman. He does almost everything right, is a smooth skater, moves the puck well, and is a big body that plays positionally sound defensive hockey. Again, I struggled where to put Robertson on the list because he seems like he’s a sure-fire NHLer, but he hasn’t made it yet and his ceiling appears to be more of a steady bottom pairing defenseman.

One other thing to keep in mind, and it’s something I go back to often. The Rangers signed Robertson almost immediately after the draft. It’s rare the team does that outside of their first round picks, with Adam Sykora being the other notable signing like this. They see something in both of them.

That K’Andre Miller comp looks nice though, doesn’t it?

Will Cuylle put up a great final season in the OHL with 43 goals and 80 points in 59 regular season games. He added 15 goals and 31 points in 25 postseason games as well. It’s clear that Cuylle stepped up when asked to play with Wyatt Johnson, who is quickly moving up the prospect ranking charts.

While some will point to Cuylle’s inclusion on that top line as a detractor, he was far from a passenger on that line. Cuylle trailed only Johnson for Windor’s team lead in goals, and was third on the team in points. Cuylle is a big power forward with a nose for the net, again playing to what both Chris Drury and Gerard Gallant want on their team. 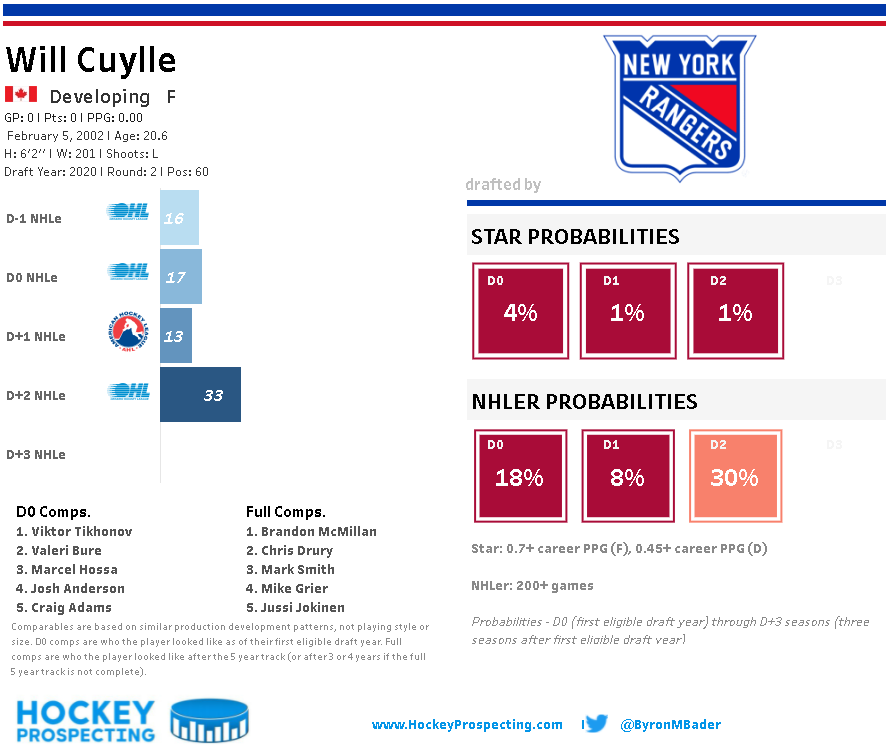 Cuylle’s projections took a major hit in the Covid mess that was junior hockey, playing up in the AHL for 18 games when he clearly wasn’t ready. Now a year older and with more confidence, Cuylle will likely spend the year in the AHL, continuing to grow and develop.

There are many that are calling for Cuylle’s inclusion in the 3LW discussion, but I do believe that is premature. He has a pretty high ceiling, but there’s still work to do. There’s no need to rush him.

Zac Jones is the only player who moved out of last year’s top-10, but again that was nothing to do with his play on the ice. You haven’t seen Brennan Othmann on the list yet, and spoiler alert, he’s the one that moved Jones back a spot. I did toy with moving Ryan Lindgren back, as Jones has a higher offensive ceiling, but how could I justify moving a top pairing NHL defenseman out of the top-ten?

Thus here we are, with the front runner for the 3LD spot sitting at #11 on this year’s rankings. I am very high on Jones, and think he’s the perfect complement to Braden Schneider on the third pair. Or at least, the perfect complement that hasn’t requested a trade. And yes, Nils Lundkvist still ranks higher because he’s more well rounded. 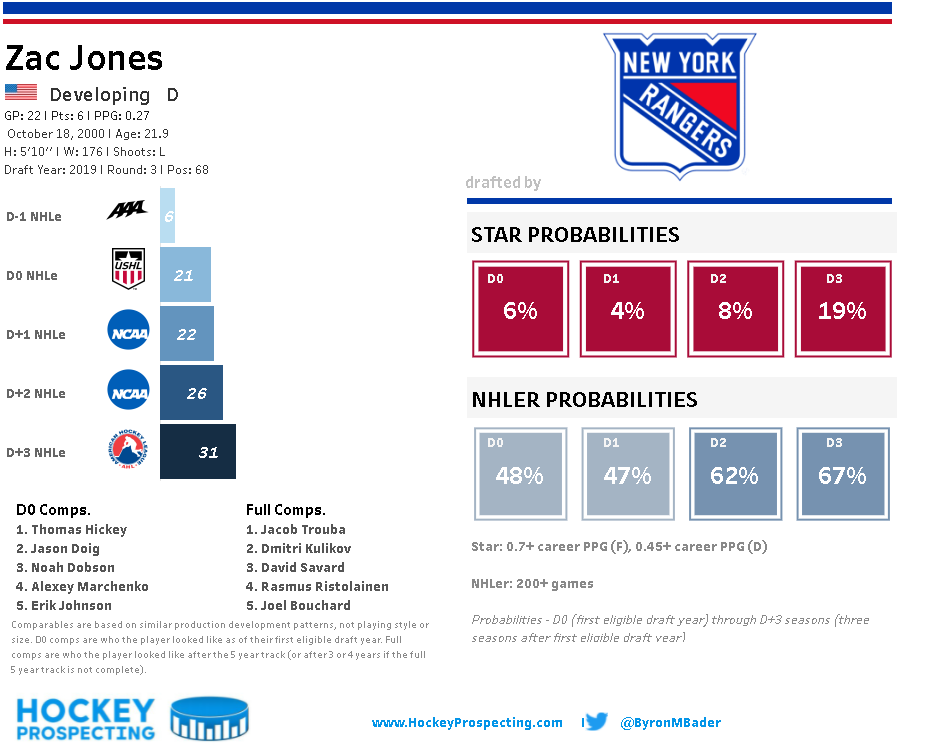 Jones put up a very impressive 9-26-35 in 52 games with Hartford last year, but that wasn’t good enough to get more than 12 games with the Rangers last year before being sent back down. Jones didn’t look out of place, but clearly there was something the Rangers wanted on that pair that they weren’t getting from Jones.

Jones may not have looked out of place, but his possession numbers were certainly lacking. That could be for a number of reasons, most notably defense partner (Libor Hajek), small sample size, and the overall quality of the team when he was with the Rangers. He should get a long look at camp, but if he doesn’t take the next step this year and become an NHL regular, then the Rangers will most likely go another route (Robertson?).