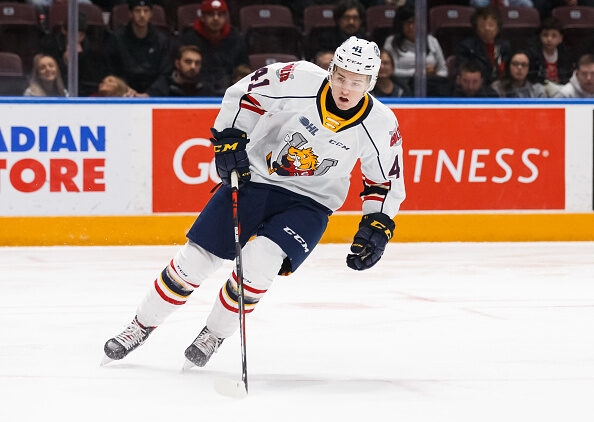 Very delayed this year, the 2021 NY Rangers Top 25 Under 25 is upon us. The delay this year that I was waiting for the Rangers to deal prospects for Jack Eichel. Naturally, that never happened. The trade would have impacted the rankings, and I didn’t want them to be stale.

The ground rules for this list are simple: To qualify for this list, a player must be under 25 years old. It doesn’t matter if this player is in the NHL, AHL, or in any of the leagues around the world. If they are Ranger property and under 25, they were considered. For the first six editions, this was broken down into two posts. The last two years the list was broken down into groups of five. The Rangers had added so many talented players under 25 years of age that it was the only logical thing to do. This year we will be doing the same. But first things first, let’s review who no longer qualifies for this list.

That’s it – just two players aged out from last year’s rankings. Only one top-ten (DeAngelo) is no longer with the organization. Let’s first go through the honorable mentions, as there are a few that simply can’t make the top-25 due to the organizational depth of young talent. You’ll notice no defensemen make the list, that’s for a reason.

It is almost impossible for Vierling to make an impact in these rankings because he didn’t play last year. However due to a multitude of factors, he finds himself as an honorable mention again. He’s still talented, and was a guy the Rangers traded up for in 2020 when they drafted him. He’s a high ceiling, skill center in a position the Rangers don’t have much organizational depth.

Vierling makes the cut because six players were no longer eligible for the list, and a few others simply didn’t play well enough to warrant any inclusion here. Either way, it’s hard to ignore the ceiling.

Riley Hughes is the first of a few players that moves up mostly because he actually played last year. Hughes actually had a pretty decent season last year, putting up 6-4-10 in 21 games with a mediocre Northeastern team. Hughes is another skilled forward that has the tools to make it into a team’s top-nine. Skills aren’t everything though, and there are a few aspects of his game, specifically defense, that need to improve before he’s a legitimate NHL prospect.

That said, we like a high ceiling, especially from the late round picks.

Oliver Tarnstrom was yanked all over the place last season. His J20 season was cancelled. He wasn’t quite ready for Allsvenskan, so he spent a lot of time in HockeyEttan, which is basically Sweden’s ECHL. It’s not the best place for a kid to develop, but at least he was playing. The concern with Tarnstrom is that he only put up 7-3-10 in 18 games in that league, but few account for the fact he was barely 18 years old.

A common theme among the honorable mentions is high end skill and ceiling, and that is the scouting report on Tarnstrom. With such a waste of a year for most of the planet last season, it’s hard to really blame him for where he played. This year is different, and it is expected he takes a step forward.

Dylan Garand is the only goalie in the entire list this year. That is mostly because of Shesterkin and Georgiev aging out, but also because Tyler Wall and Adam Huska were both pretty bad last season in Hartford. Granted the Pack didn’t do either of those two any favors, but they looked shaky nonetheless.

As for Garand, he has some high hopes. He was selected to Canada’s World Juniors team last year, a surprise selection. He didn’t play much, but the selection does speak volumes since he wasn’t expected to even be in the running. The knock on Garand is his size, but for some reason NHL scouts love giants in net. He’s talented, but raw. Goalies are voodoo though, so who knows how this will turn out. When it comes to actual goalie talent, Garand appears to have the most of all of the Rangers prospects.