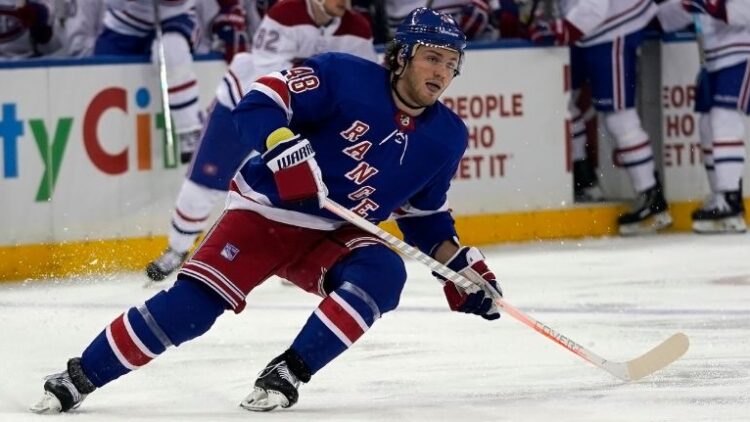 After covering yesterday’s honorable mentions, the 8th Annual New York Rangers Top 25 Under 25 begins with numbers 25-21.  To recap, the ground rules for this list are simple: To qualify for this list, a player must be under 25 years old. It doesn’t matter if this player is in the NHL, AHL, or in any of the leagues around the world. If they are Ranger property and under 25, they were considered.

Jakob Ragnarsson took a big step last year in his overall game after a rough 2018-2019 season. He put up 1-8-9 in Allsvenskan last season after a bit of a rough start in the AHL and some injuries. Ragnarsson projects to be a bottom pairing defenseman right now who is solid, if unspectacular, in all three zones. He’s not going to wow you, and the Rangers think he needs another year after this one in Sweden.

For the second straight year, Yegor Rykov slides down to almost off the list. Again though, this is by no fault of his own. Last year he was just extremely unlucky with injuries, and then had a rough time adjusting to the North American game. Unfortunately, that results in a stagnant year. With the Rangers continually adding young talent couple with other prospects progressing, that means Rykov slides. He’s been playing well in the KHL this season, but now there are doubts about whether or not he comes back. He’s someone that can be a wild card for prospect depth, but he has some ground to make up.

Of all the undrafted free agents the Rangers signed this year, Patrick Khodorenko was the one that piqued interest the most. Much improved on his skates, many have him competing with Morgan Barron for a fourth line role with the Rangers this coming season. The Rangers hone in on constant improvement, and while Khodorenko still lacks breakaway speed, the Rangers think they can mold him into an NHL player. He projects out as a bottom-six player.

Brendan Lemieux slides four spots almost entirely because of other players in the system. That said, we are also learning what Lemieux is. He’s got talent, and he truly excels at drawing penalties, which has tremendous value. He’s a bottom-six player who, on a true contender, is on the fourth line. He is also a solid net-front presence. He’s solid, just with a low ceiling. The low ceiling keeps him from moving up higher on this list.

What a difference a year makes. On draft day last year, the Hunter Skinner pick was viewed as the only “weaker” pick in what was otherwise a great draft. Now, after a strong season in the OHL, he’s earned a serious look for Team USA at the 2021 World Juniors. Skinner is rocketing up the prospect depth charts. His PNHLe on Dobber Prospects has him continually moving towards a bottom-four potential.