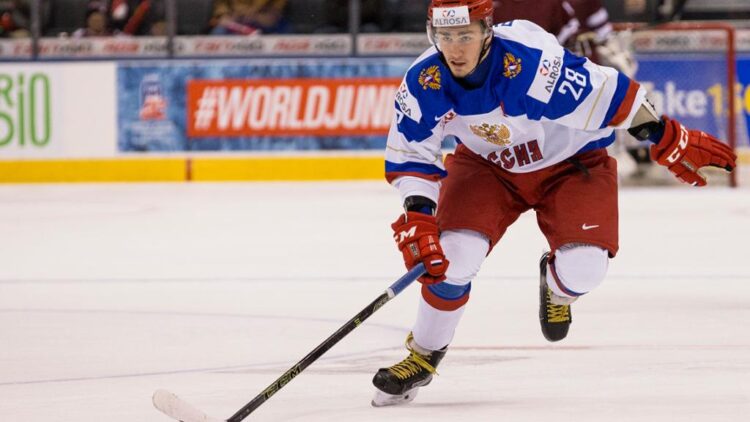 Yesterday we ranked the first six players to crack the 7th annual New York Rangers Top 25 Under 25, and now it’s time to tackle the next five. As a refresher, the ground rules for this list are simple: To qualify for this list, a player must be under 25 years old. It doesn’t matter if this player is in the NHL, AHL, or in any of the leagues around the world. If they are Ranger property and under 25, they were considered.

Henriksson was a home run swing by Gordie Clark, Jeff Gorton, and the rest of the scouting team at this year’s draft. The playmaking center had a solid J20 season in Sweden, putting up 13-36-49 in 45 games, and is expected to play in the SHL for Frolunda next season as an 18 year old. As expected for a playmaker, Henriksson is a great passer with solid hockey sense.

The biggest concern, and why he doesn’t rank higher, is how much of his production is linked to 2020 top-ten pick Lucas Raymond. However based on the above, it looks like Henriksson generates offense without Raymond, which is a great sign. Let’s see how his rookie year in the SHL goes.

When the Rangers acquired Lemieux in the Kevin Hayes trade, a lot of folks were left scratching their heads. Lemieux is talented for sure, but there were other players in Winnipeg’s system that seemed to fit the “young and skilled” mold more than Lemieux. Lemieux is viewed as a grinder, even though he was the first pick of the second round in the 2014 draft. A player like Lemieux, a grinder/pest that is also skilled, has an important role in the NHL. There are very few players like Lemieux. If he’s Sean Avery on the first go round, not the second, then this is a solid trade and Lemieux will find himself a top-nine role. This kind of sandpaper is the kind we like – those that can do more than just piss people off.

Rykov slides a decent chunk this year, but as with the rest of the slides this year, it is by no fault of his own. Rykov had a great year with Sochi in the KHL last season, playing big minutes for a playoff team. He’s not a noted scorer, putting up just 3-6-9 in 47 games, but he is a solid skater and just overall solid defensively. He’s what most people think Ryan Lindgren is. It’s why Rykov has ranked high on this list in the past, and why he will continue to be on this list as long as he continues to show progress. If there’s a sleeper to make the club on the left side this year, it’s him.

It’s funny. Robertson was considered to be a “safe” pick by the Rangers, but he’s possibly the most valuable in the 2019 draft. By the way, have I mentioned how much I love what the Rangers did in this draft? Roberton excels in transition and is a solid passer, which is something the Rangers sorely need on the left side.

Nice encapsulation of #NYR pick Matthew Robertson courtesy of the fantastic @MitchLBrown. Not the biggest sample but it aligns with what the scouts (any myself fwiw) have noted about his game: excellent in transition and a good passer. I think #NYR fans will grow to love him pic.twitter.com/hWCoKWCT9y

Robertson is just overall solid across the board. He’s not perfect, after all he’s a second round pick and not a first round pick, but as the NHL evolves into a transition game, players like Robertson are gold. The quick first pass to start the breakout is the most important, and is infinitely more valuable when you can actually defend as well.

Barron makes a big jump this year after almost doubling his output with Cornell in his sophomore season. In 36 games, Barron tripled his goal total and added 50% to his assists, finishing with a line of 18-15-34 in 36 games. He’s one of the bigger prospects in the system at 6’3″ and 214 pounds, and he knows how to use his size to grind through a forecheck down low. As expected, he’s strong, which leads to solid puck protection, but he’s also very skilled and can create offense. There’s a reason why he was one of Cornell’s leading scorers last season. He still has a long way to go, but if he continues on this development path, then the Rangers found a gem late in this draft.