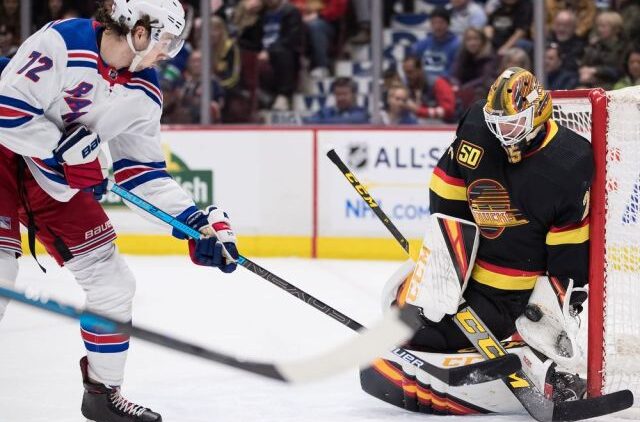 Matthew Robertson is the best NY Rangers prospect that no one is talking about yet. The theme has been showing improvement, and Robertson followed up his draft year by doubling his goal total and adding 50% to his point total. The 6’3″, 200 lb left defenseman is going to give K’Andre Miller a run for his money as top LD in the prospect system.

Robertson is a great skater and very sound in all three zones. His positioning and reads are superb. His passing is a critical asset to his game to help in transition. Already signed to his ELC, the Rangers are very high on him. If the CHL/NHL transfer rules were different, he’d already be in the AHL.

Chytil is perhaps the 2C of the future. He made tremendous progress in his second full season. He’s shown he’s a play driver and a three zone center. We also saw the flashes of his ceiling with those highlight reel drives to the net.

It looks like Chytil will get every opportunity to expand on his solid showing last season. The big thing, as has been mentioned numerous times, is showing improvement. Chytil has made strides each of his past two seasons, and looks primed to take a big step forward next season.

It’s worth noting that Chytil’s progression compares very favorably to Aleksander Barkov in Florida. There’s no guarantee, obviously. But it’s worth noting.

Vitali Kravtsov drops on this list because he lost a year of development with the injuries last season. It was rough for him, but he’s tearing up the KHL at the moment. In 13 games, he has eight goals –the most on his team– and ten points. Perhaps he just needed a full injury free season to get going again.

Despite falling in this list, Kravtsov’s ceiling is still a top-six winger. He’s a dynamic offensive talent, capable of making even the best defensemen look silly. He’s a great skater with a nose for the net and the hands/shot to go with it. Don’t sleep on him because of one injury riddled year.

As an aside, it looks like he has higher upside than Chytil, which is why he gets the higher spot. Ceiling matters.

Last year Lundkvist was one spot ahead of DeAngelo, this year they flip places. This is by no fault of Lundkvist, who again showed great progress last season. Lundkvist is already one of the top defensemen in the SHL, and there are rumblings that the coronavirus pandemic is why he didn’t sign his ELC with the Rangers this season.

Lundkvist is a true three zone defenseman. An elite skater who makes great reads, passing and playmaking is obviously his strength. He’s adding muscle as well, which is helping him defend the front of the net in the defensive zone.

Lundkvist has the potential to be the future 1RD on the Rangers. He’s that good.

What a year it was for DeAngelo. He more or less quadrupled his goal total from last season and was on an 82-game pace of 18-48-66. He has a lot of defensive issues, but you can’t ignore the scoring or that pace. DeAngelo now has a two year deal to show improvement and round out his game. And remember, everyone has room for improvement, even Connor McDavid.

DeAngelo actually turned 25 two days ago, but I started the list while he was still 24. Technically that counts as under 25, so I’m cheating a bit.

For those wondering why DeAngelo isn’t in the top five, and I’m sure there will be a few comments, take a step back and think about who is left.