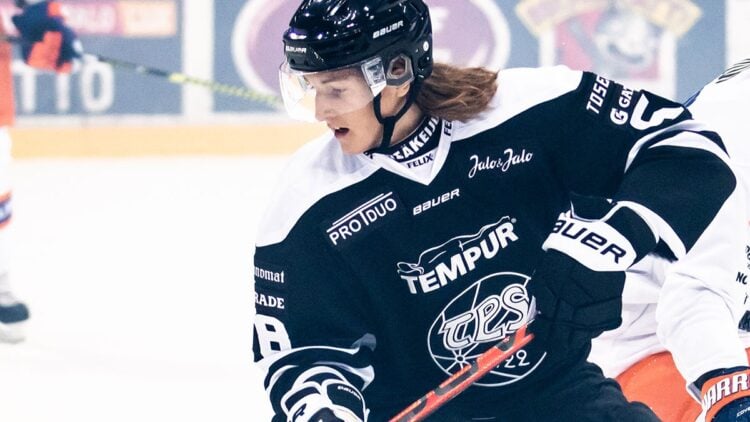 On Tuesday, we started the 10th annual NY Rangers Top 25 Under 25 with the honorable mentions. The ground rules for this list are simple. To qualify, a player must be under 25 years old. It doesn’t matter if this player is in the NHL, AHL, or in any of the leagues around the world. If they are Ranger property and under 25, they were considered.

With that, we jump into the meat of the list with numbers 25-21, and reviewing what we’ve ranked this year..

Lauri Pajuniemi makes the biggest fall on the list, going from #15 last year –and #13 the year before– to #25 and barely staying on the list. I still like Pajuniemi, but he’s a very one-dimensional player with his shot, but it’s a very effective dimension, especially on the powerplay.

Perhaps Pajuniemi will get a boost with a hopefully improved Hartford offense. Playing with better players usually breeds improvement, and Pajuniemi did put up 13-13-26 in 51 games on a relatively bad team while also dealing with injuries. Injuries, his age (23), and some holes in his game to fill result in him dropping to #25. 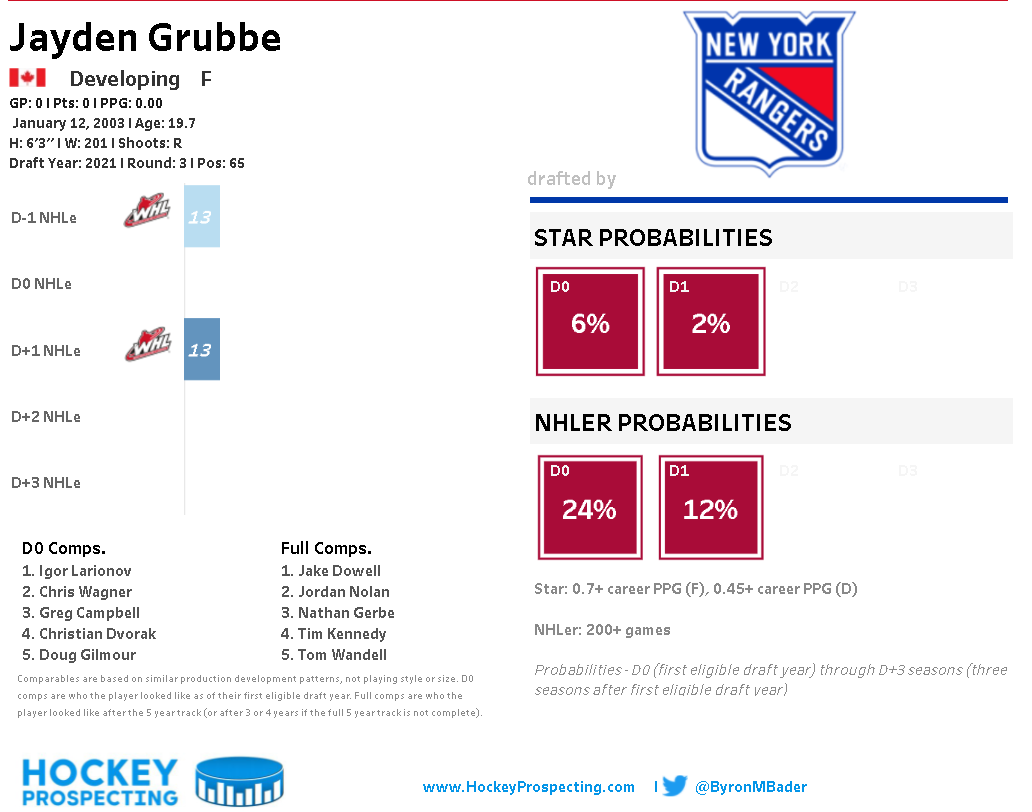 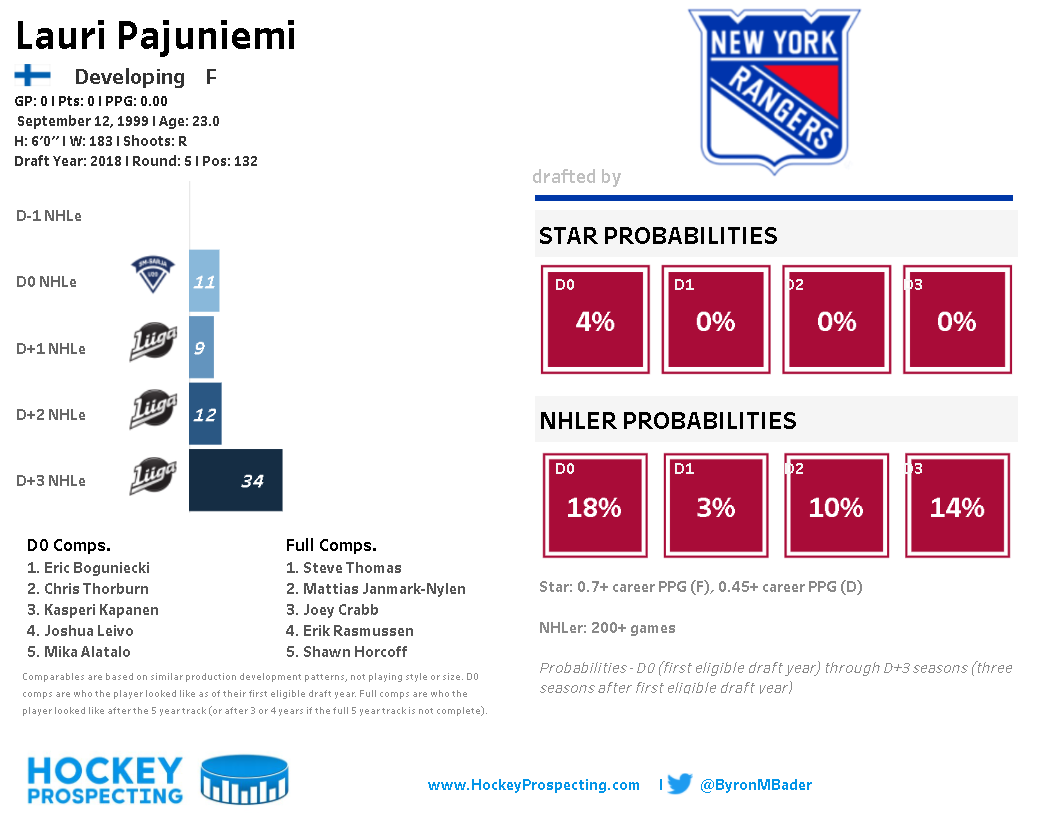 Tied with Pajuniemi is Jayden Grubbe, a kid that the Rangers took ahead of their better 3rd rounder in 2021, Ryder Korczak. Grubbe seemingly has a lot of the intangibles that don’t show up on a score sheet, and he was given a leadership role on Red Deer at just 18 years old. But skill still matters, and Grubbe is more of a grinder/4th liner than a skill player.

Don’t take that the wrong way, players like Grubbe are critical to a team’s success, but it does cap their rankings in lists like this because of the lack of true offense. His 14-21-35 in 68 games isn’t anything to write home about. The Rangers clearly like him though, which is why he managed to get on the list.

Oliver Tarnstrom had his development path completely wrecked by Covid, much like many of the 2020 draftees. The kid is very skilled, but he was bounced around Sweden between his J20 Nationell team, HockeyAllsvenskan, and HockeyEttan, Sweden’s third tier league. It’s easy to discount that year, but it was important to show progress.

This past year, Tarnstrom mostly stuck in either the J20 league (17-17-34 in 31 games) or the SHL  with Rogle (1 assist in 27 games). Sticking with Rogle was clearly something he needed, as he shattered his J20 scoring line from the prior year. Playing 27 games in the SHL as a 19 year old is also something that shouldn’t be ignored, despite the one point. Remember, he’s listed at just 153 lbs playing against grown men. Playing 27 games in the SHL means something here. 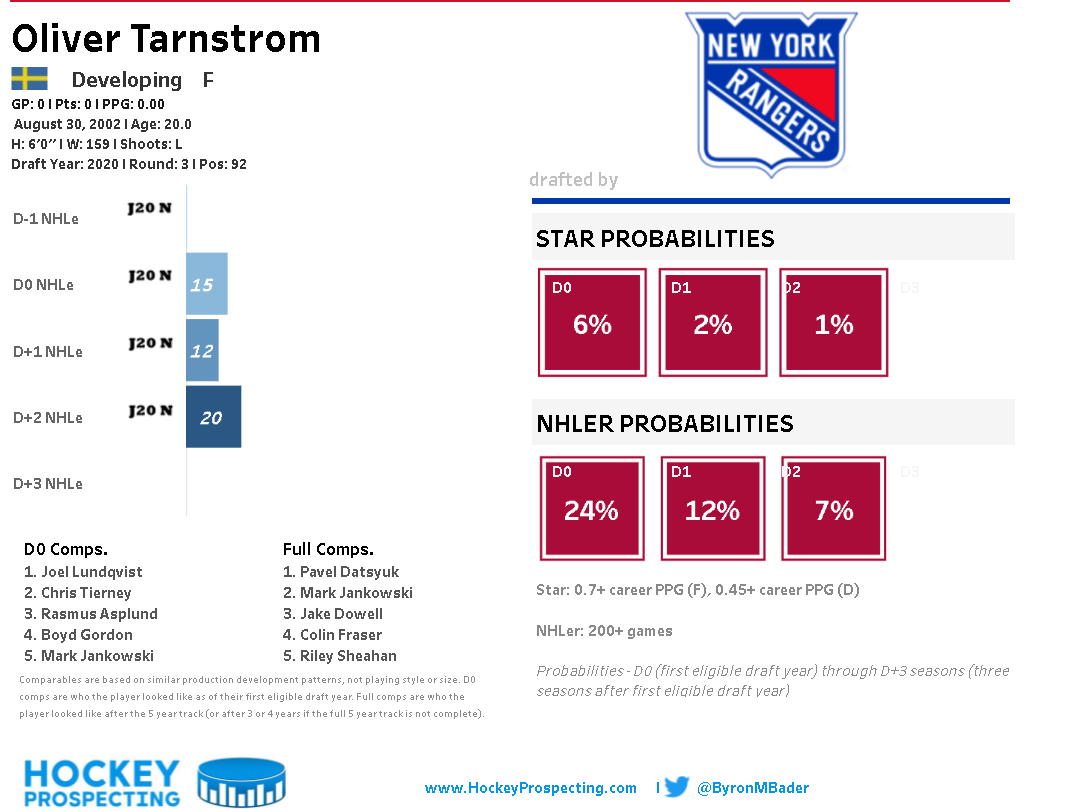 Tarnstrom will continue to grow in the SHL, and hopefully he will add on the right type of muscle to better adapt to the pro league. Tarnstrom is my “sleeper,” if you can call it that, from recent drafts to make a big impact down the road. Tarnstrom still has a long road ahead of him, and his NHL comps aren’t bad, so there’s a lot to look for here.

Karl Henriksson is another player that takes a significant step back in these rankings, but that doesn’t necessarily mean he took a step back in his development. Henriksson signed his ELC before last season, but was loaned to Frolunda for the year, where he put up 3-6-9 in 40 games, besting his prior year’s scoring line of 1-6-7 in 44 games.

Henriksson isn’t going to wow you with an amazing scoring line, that much we know. His initial projections were a middle-six center, but given the lack of offense, he’s more likely to be a 4C at the NHL level. That’s fine, as the Rangers have been trying to piece together a 4th line for a while.

Henriksson is ahead of players like Pajuniemi because his path to the NHL seems a little more certain should he make it. He’s strong in all three zones and is playing key roles with Frolunda. That is, of course, when he plays, as he had several nights of less than 5 mins TOI, and a few scratches as well. 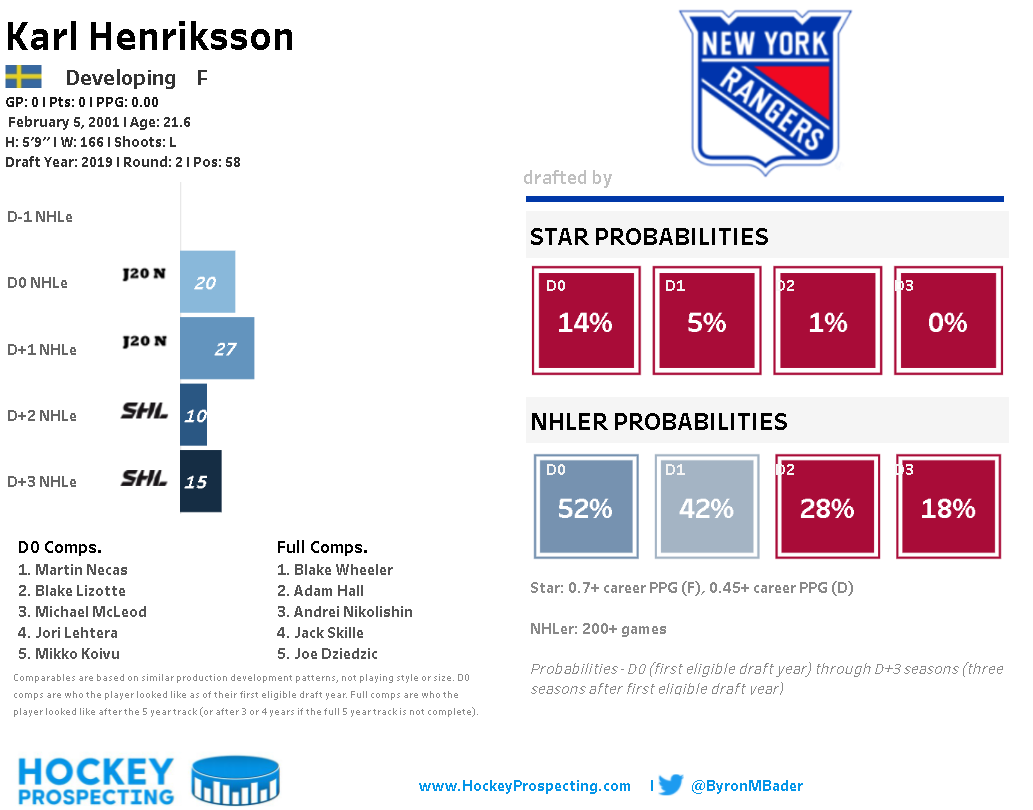 This is a key year for Henriksson, who will turn 22. He wasn’t loaned to Sweden yet, so the expectation is that he will be with Hartford for his first North American pro season. Hopefully he will show some more sustained offense, which usually translates better to the NHL, even in a bottom six role.

Kalle Vaisanen was a player that, when selected by the Rangers in 2021, many were thrilled about. Vaisanen was considered a “safe” pick at that point in the draft, with a very high floor. He’s starting to see that floor already, sticking with Liiga as an 18 year old for most of last season (he turned 19 in January). He put up a goal and 5 points in 32 Liiga games, to go with 8-12-20 in 17 U20 games. 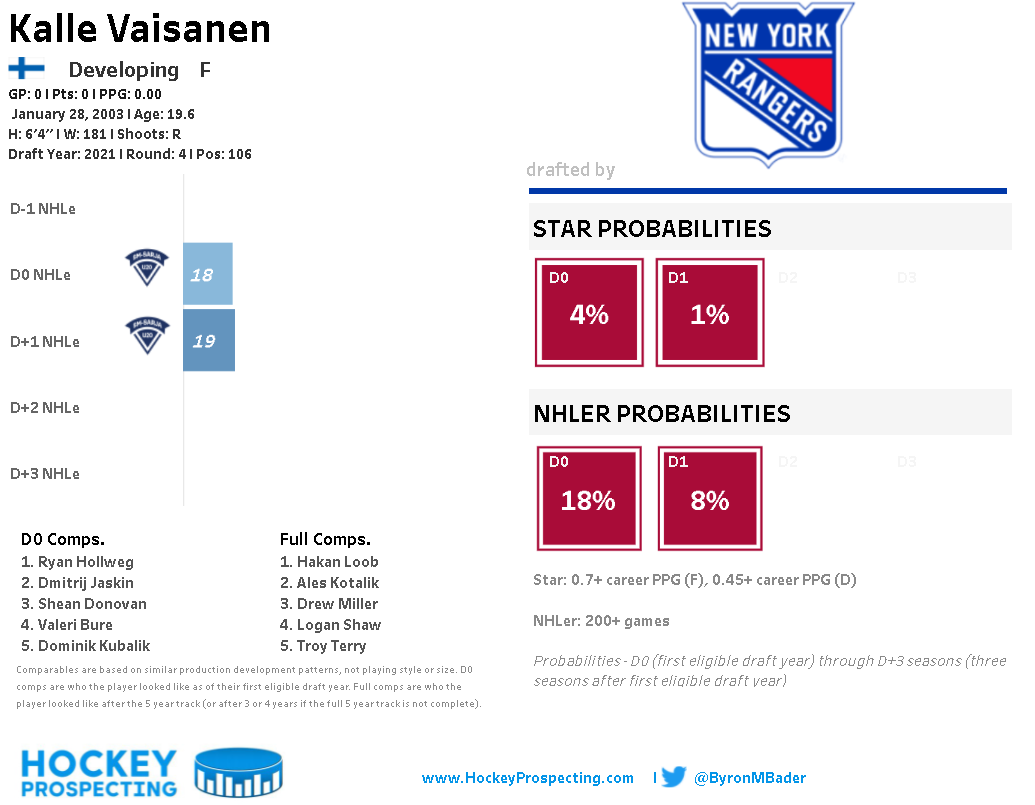 Vaisanen is a big body who is strong on his skates, good with the puck, and strong in all three zones. Typical Finnish hockey, just overall good. Naturally Vaisanen has a long way to go, but he’s projecting up. The goal for him is to continue to progress, and hopefully up that offensive scoring line a bit.

Tarnstrom and Vaisanen are two of my favorite prospects playing overseas right now, along with Adam Sykora.