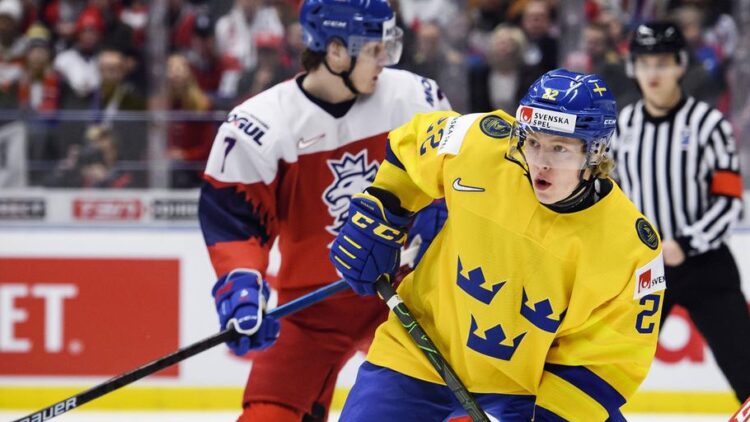 After covering the first five yesterday, it’s time to crack the top-twenty in the NY Rangers Top 25 Under 25. To recap, the ground rules for this list are simple: To qualify for this list, a player must be under 25 years old. It doesn’t matter if this player is in the NHL, AHL, or in any of the leagues around the world. If they are Ranger property and under 25, they were considered.

I’ll probably get some flack in the comments for having Hunter Skinner ahead of some others, but that’s fine. It is very difficult to judge Skinner on last season, since the OHL season was cancelled. He found time in the ECHL, where he wasn’t necessarily dominant but it was clear he was too good for the league. The Rangers saw this and accelerated signing him to an entry level contract. He played 10 games in the AHL, notching a goal and an assist.

In signing Skinner to an ELC, he clearly showed them something that warranted the contract. It also helps that he was a surprise add for Team USA at the 2021 World Juniors. He only got a game, but he wasn’t even projected to be in consideration. His game took a major leap forward in 2019-2020 before COVID shutdowns, and he made the best of a bad situation last year. He’s not going to be confused for Adam Fox, but he still has a shot at making it to the NHL. He will need to pass a few players on the depth charts for that to happen, and it’s definitely an uphill battle for him.

The Rangers love their big dudes in the late rounds, and Adam Edstrom was a big dude who could score when they took him. Edstrom has spent the last two seasons playing decent minutes for Rogle in the SHL during his age-19 and age-20 seasons. He’s big, so that helps, but a teenager holding his own in that league is tough. His scoring lines aren’t sexy (4-5-9 in 46 games two years ago and 3-7-10 in 43 games last year), but he’s also not being given those big scoring roles.

Edstrom plays a very physical game –he was suspended five games last year for a head shot– but also has a great shot. His skill game needs more work, but he’s also a pretty decent skater for a guy his size. He doesn’t project to be a top-nine player, and he’s a bit of a project pick. Perhaps this is leaning too heavily on two years in the SHL as a kid, perhaps not.

Brody Lamb was the only pick from the 2021 draft that everyone liked immediately. And what’s not to like? He’s got a ton of talent, great stick work, solid skating, and a lethal shot. He put up 52 goals and 87 points in 24 (!) games in his senior year of high school. This kid seems like the real deal already, but remember his numbers were in high school, not college and not the CHL.

Lamb will spend a year in the USHL with Green Bay this season and is committed to the University of Minnesota after. Lamb won’t be a pro for quite some time, but he will garner a lot of attention. It’s impossible to project toolsy kids out of high school, but he has the production to show he’s not just a flash in the pan.

Lamb and Ryder Korczak could have been flip flopped, but I went with the kid putting up a point per game in the WHL instead. Tough call, but at least there’s some logic there. He’s a great skater with matching hands, making him an effective scorer. The tools are there, and the strength/weight will come. He’s a late birthday, and he just turned 19 yesterday. The Rangers really nailed back to back picks with him and Lamb.

Korczak could stand to work on his shot, and will need steady improvements and development to hit his potential as a middle six forward. One common theme among non-professional players in ranks 16-25 is skill and ceiling, and Korczak has both.

Karl Henriksson is the best center prospect the Rangers have. If you’re unsure how you feel about that, then I’m in the same boat as you. Henriksson is a solid middle-six ceiling prospect and is solid in his own right, but you’d like to see a few other centers on this list. But that isn’t Henriksson’s fault. He’s been called a critical piece for Frolunda by his coach, which is impressive considering it was his rookie season in the SHL in a screwed up year all around.

Henriksson, who will turn 21 in February, is again very skilled and a solid two way player. He was eased into the lineup in the SHL, playing under 10 minutes per game in 44 games. It’s all about development, and the Rangers wouldn’t be bringing him in for camp unless they saw something in him overseas. He’s not going to make the roster this year, thus will be sent back to Sweden. But he’s an important prospect and one that should wind up with the Rangers in some capacity in the next 2-3 seasons.