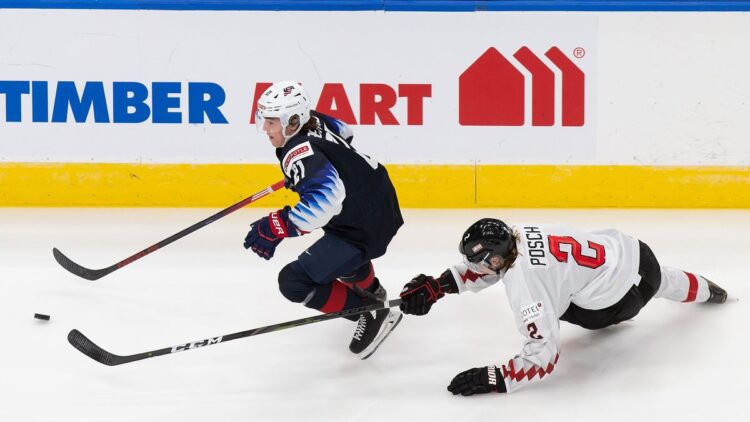 After covering the honorable mentions, it’s time for the first five in this year’s Rangers Top 25 Under 25. To recap, the ground rules for this list are simple: To qualify for this list, a player must be under 25 years old. It doesn’t matter if this player is in the NHL, AHL, or in any of the leagues around the world. If they are Ranger property and under 25, they were considered.

Brett Berard is an interesting prospect. Detractors will look at his size and say he won’t make it. Ignoring the fact these assumptions were made about an 18 year old, there was at least some merit. Berard needed to add some strength and weight so that he won’t be knocked off the puck. That’s fine. But it also ignores a speedy, skilled, and smart player who is relentless on the forecheck and has risen up the depth charts across the board.

Berard, like Dylan Garand, was a surprise pick for Team USA for the 2021 World Juniors. He put up a goal and four assists in the tournament to go with his 5-5-10 line with Providence College this past season. This kid has a lot of things going for him, and he will add the muscle needed to make the transition to the pro level.

Eric Ciccolini was one of the few kids that actually had a *somewhat* normal season last year with Michigan. He was 5th in scoring among forwards with the Wolverines, who qualified for the Frozen Four before having to withdraw due to COVID.

In his sophomore season, Ciccolini put up a line of 7-5-12 in 24 games, which was a six goal and one point improvement from his freshman season (26 games). As one of the only players to have a full season and show improvement, he leapfrogged some others who may have higher ceilings. Ciccolini is speedy with some solid skill. His vision and two-way game are underrated as well. He was ranked well ahead of his draft position, which is interesting.

Ciccolini is the ideal kind of player who spends four years in college to jump right into a bottom-six and penalty killing role. Speed and vision go a long way in the NHL.

I toyed with putting Ciccolini ahead of Leevi Aaltonen, but decided to keep the Finnish forward at the #23 spot this year. Like Ciccolini, Aaltonen played a mostly full season. But what sets Aaltonen apart for now is that he played in Liiga, the top league in Finland, as a 20 year old. While not exceedingly rare, it is uncommon. Aaltonen’s numbers weren’t sexy with just a goal and six points in 22 games, but there’s more to his game on the defensive and penalty killing end.

Aaltonen has a very similar skill set to Ciccolini. He’s fast, smart, and solid in all three zones. Aaltonen is ranked ahead because he did it at the pro levels overseas. These two are players to watch over the next two years.

Worth noting that there is very little separating Aaltonen, Ciccolini, and Berard. If these are your bottom three this year, then it speaks to the incredible depth the Rangers have across the system.

Tarmo Reunanen went from dark horse last year to falling seven spots this year. This isn’t necessarily due to anything he did or didn’t do on the ice though. This is simply other players passing him on the depth charts. Reunanen played four games with the Rangers last year, recording an assist and playing replacement level defensive hockey. There was nothing that stood out in his game, but there was nothing that showed he was overwhelmed either.

Perhaps that was the issue with Reunanen last year. He didn’t separate himself from others and earn a role over guys like Anthony Bitetto and Libor Hajek. Jack Johnson aside, since he was pretty much guaranteed a spot, the Rangers had enough turmoil on the blue line last year for Reunanen to step up and make his mark. He didn’t, ceding his position on the rankings to Zac Jones and others.

A lot needs to go right for Reunanen to see time with the Rangers. It seems more than likely he is with another NHL team before the season is done.

Julien Gauthier went from Chris Kreider-lite to possible 14F on the Rangers this year. It’s very difficult to say how things would have been had he been given more time, especially given his unique set of skill and strength. We saw a lot of improvement throughout the year form Gauthier, with a few highlight worthy drives to the net. He seemed to finally put it together that he has the speed and strength to dip the shoulder and drive past a defender. However despite that his two goals and eight points in 30 games wasn’t really attention grabbing. His underlying numbers weren’t exactly great either.

Was that a product of opportunity? That argument loses credit when Filip Chytil was his second most often paired center. Gauthier had his chances, but so far he, like Reunanan in far more games, hasn’t taken his chance to step up. Now with many other bottom six wingers in tow, Gauthier is on the outside looking in.