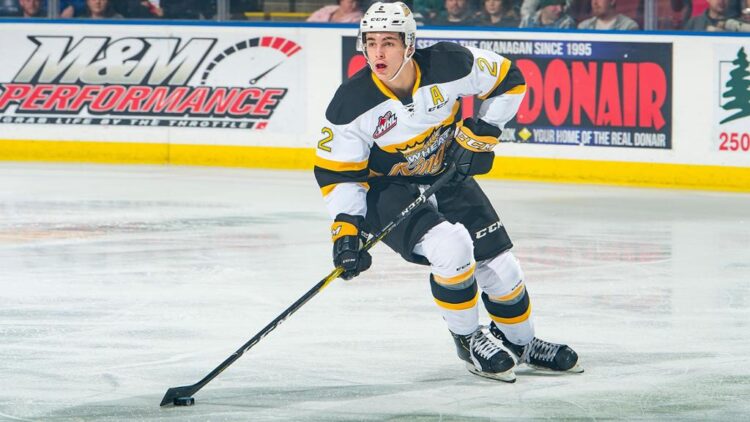 Let’s continue with the NY Rangers Top 25 Under 25, this time breaking into the top-ten. To recap, the ground rules for this list are simple: To qualify for this list, a player must be under 25 years old. It doesn’t matter if this player is in the NHL, AHL, or in any of the leagues around the world. If they are Ranger property and under 25, they were considered.

Zac Jones went from solid third round pick to a must sign prospect in the matter of a year. After leading UMass-Amhearst to a Frozen Four Championship in his sophomore season, the Rangers moved quickly to sign him. The Rangers even burned a year on his ELC to get him to the NHL at the tail end of last season. Jones didn’t miss a beat, putting up four assists in ten games. Jones showed he belonged.

There aren’t many defensemen that make the transition to the NHL as seamlessly as Jones did. That said, he will certainly benefit from a year in the AHL getting big minutes in all three situations. Jones’ ceiling is a top-four defenseman who will likely put up pretty solid offensive numbers. He’s no slouch defensively either. Jones is one of many solid defense prospects the Rangers have.

Much like Jones, Schneider is yet another of the big defense prospects the Rangers have. A first round pick, Schneider is a physical kid that can skate and score. In his final season in the WHL, Schneider was over a point per game, which was actually a bit surprising. At just 20 years old, Schneider is already a dark horse to make the NHL roster this season, albeit unlikely. Schneider and Jones will probably be the top pair in Hartford, with Matthew Robertson looking to sneak in to get minutes there as well.

There’s an argument to swap Jones and Schneider, given Jones has more offensive upside. However for me, the first round pedigree gave Schneider the slight edge. But don’t get me wrong, both are great prospects.

It’s been a bit of a roller coaster ride for Vitali Kravtsov. The Rangers’ first rounder in 2018, Kravtsov came with a high ceiling and tremendous skill. However he faltered in 2019-2020, struggling to adjust to the North American game while in a new country. That’s a lot for a 19 year old kid to take on, and he stayed in Russia last season. That actually worked out better for him, as the KHL actually had a full season.

Kravtsov came over and jumped right into an NHL role. In 20 games, mostly on the fourth line while the Rangers were in a tail spin, Kravtsov put up two goals and four points playing primarily with Brett Howden and Kevin Rooney. This year is a big year for the 21 year old, as he will get a significant bump in teammate quality with Filip Chytil and Barclay Goodrow. Kravtsov still projects out to be a very skilled top-six forward. The skill is there, and now the linemates and coaching should get the most out of him.

I am likely higher on Filip Chytil than many, and I look forward to seeing what the kid can do away from David Quinn. Despite the well documented issues with the ice time distribution, Chytil still set career highs (over an 82 game pace) last year with a 16-27-43 point pace playing primarily with Alexis Lafreniere and Kaapo Kakko. He did this with little power play time as well.

Little known fact: Chytil was 7th in the NHL last year in even strength P/60 among centers (minimum 500 minutes). He was ahead of players like Mat Barzal, Patrice Bergeron, Tomas Hertl, and Mika Zibanejad. This suggests that Chytil, if given more ice time at even strength and on the powerplay, will put up some significant offensive numbers. He is likely ready to take over the 2C role now, should Ryan Strome falter or get hurt. He’s just made steady progress year after year. Remember, he’s just 22 years old. There’s a ton of skill here, plus room to grow.

Giving up on Chytil now would be a fool’s errand. There’s a solid argument that a top-two center combination of Eichel-Chytil going forward would be the best case for the Rangers. But that’s a whole other conversation.

Ok, I was wrong about Ryan Lindgren. In my defense, there was at least statistical backing prior to last season. The 2021 season is where Lindgren really came into his own, showing he was not simply just riding Adam Fox’s coattails. Lindgren put up fantastic numbers when not paired with Fox, cementing himself as a legitimate top pairing defenseman. Lindgren doesn’t put up points, but he adds an element that the Rangers don’t have. Not only does he throw the body, but he is a solid skater and sound positionally. He’s the new age defensive defenseman.

Offense will likely keep Lindgren from cracking the top five in the NY Rangers Top 25 Under 25, but that’s fine. Depending on how the other defense prospects pan out, they may even pass him. Again, that’s fine. Not every player needs to put up 50 points. Lindgren has a role, and it’s an important one. Expect him to be the rock on the blue line and the penalty kill for years to come.