First things first – I think it’s time I eat my hat about Ryan Strome. Last year the numbers showed he was mostly a product of Artemi Panarin, but this year he picked up his game and has proven himself as a legitimate 2C on the Rangers. The potential was always there, and perhaps he just needed that elite player and a defensive coach to round out his game. But with success comes questions. What are the Rangers plans for Ryan Strome and his future in New York?

Strome, who again has established himself as a legit 2C, has one more year on his deal at $4.5 million. Given his production, that’s a major bargain. His 12-24-36 line is simply great, with just 2-12-14 of that on the powerplay. That means he’s producing more at even strength, which is a big aspect of his statistical turnaround.

The difference in defensive play is in stark contrast to last season, and the key is that he is putting it together both with and without Panarin. 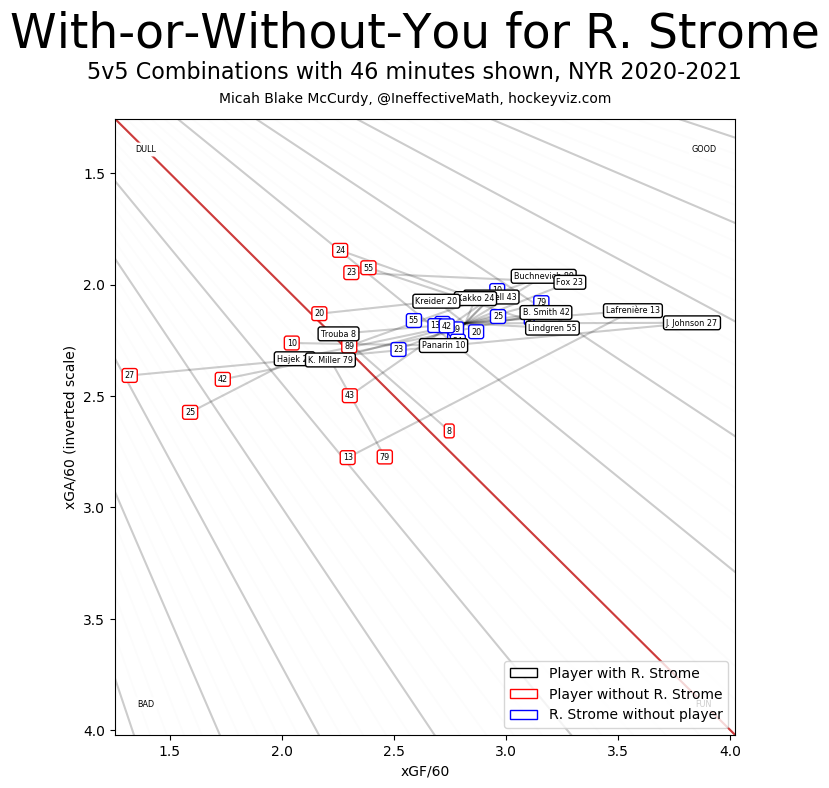 WOWY’s are a little noisy, but what this shows is Strome generally sits where all the lines originate. What we want to focus on are the blue boxes, which are also around the same area. This shows Strome produces with whomever he plays with. Another key are the red boxes, which are almost all to the left of Strome. This indicates that players are generally performing worse without Strome than with him.

Now again, these are a little noisy, since there are a ton of other factors at play here. But it’s still a useful tool to show Strome isn’t just a product of Panarin and isn’t smoke and mirrors. He’s a legitimate 2C.

Can he keep it up?

This is the $64,000 question. While a short term extension did make sense last offseason, his production has blown his current deal out of the water. At 27 already, and 29 when he will need a new contract, the question is whether or not a late bloomer can be an outlier in the aging curve. At age 29 is when we really begin seeing a noticeable decline in most players. But most players don’t have a huge level up like Strome did at age 27. It’s tough to gauge.

What we do know is the Rangers didn’t see him in their long term plans as recently as last October. He wasn’t given a qualifying offer initially, and Jeff Gorton acknowledged a potential trade was the cause of the delay.

Something I've been meaning to look at. Ryan Strome is having a very good year and NYR might be thinking they can't do without him.

The risk here, though, is that if he comes off this peak and crashes, that potential extension could get real messy. pic.twitter.com/LSr6XPCSmV

The concern with Strome is that, as Rob points out, he is filled with fluctuating performance. This season is very clearly a career year for Strome, his second in a row quite honestly. Any kind of long-term extension comes with a clear risk of not just declining performance, but fluctuations and streakiness.

To play Devil’s Advocate here, most of Rob’s data comes from seasons in which Strome was in Edmonton, which is when he cratered. But even then, we saw peaks and valleys. It’s tough to get a good feel on Strome. Will he be the player he was in Edmonton on his next deal? Or will he be more of a PA Parenteau, continuing this kind of production well into his thirties?

I don’t like the phrase “sell high” because it implies players are like the stocks. You buy low and sell high based on production. That’s not the case in the NHL. Players are known entities, and most NHL General Managers are aware of these risks with Strome. The question will be whether or not a GM would want to trade for Strome.

Now there are many cases for the Rangers to hold on to Strome, specifically that dollar-to-production value he has at the moment. Quite frankly, there aren’t many centers who produce more than Strome at such a low cost. Cheap production wins championships, and given how Strome has played over the past two years, he’d be a key piece.

But timing matters. The Rangers aren’t competing this year, not realistically. They should be competing next year, and a few more career years may propel them further than most of us thought. Can Strome be a part of that? Absolutely.

But can Strome also be a key piece in a deal for a cheaper center with more potential? Can the Rangers swing another Brassard for Zibanejad type deal, using Strome as the center piece? That’s also a possibility. Especially when you throw in COVID related financial constraints on many owners.

The good thing for Jeff Gorton is that he doesn’t need to rush a decision. Ryan Strome’s future with the Rangers may not see an end until next season, or even a few more seasons down the line. But he’s also not a bad GM, he will listen to offers on Strome. The Rangers already have an idea of what Strome’s value is, and what his future with the team is. If an offer exceeds that value, he will be gone. If not, he will stay.

While his future with the Rangers may be a tough call, we can all at least enjoy what Ryan Strome is doing on the ice. He’s also shown to be a good voice in the locker room and in interviews. There’s value in that on such a young team as well.