Ryan Strome has been good enough in the short term

Entering the season, there were many questions regarding Ryan Strome and his future with the Rangers. It’s no secret that the Rangers tried to trade him this summer before signing him to his two-year extension. He may not be a part of the long-term plan, but in the short-term, Strome has been good enough. At least for now.

Strome is going to be an all offense, no defense center. That’s fine in the right role. he’s also unlikely to be a play driver on his own. He needs to be with the right wingers to bring out the best in him. Luckily the Rangers have one of the best wingers in the game in Artemi Panarin. That duo has worked, even if it’s almost entirely Panarin driving play. Strome just needs to be in the right place, and he’s done that.

Looking at Strome’s game log, he had a terrible first game. Everyone did. But after that, Strome had six of seven games with over 50% xGF. That one game was a 31.6 xGF%, so it was atrocious. But still, that’s a nice run. Strome did have four games over 70% xGF in that span. When he’s good, he’s great. When he’s bad, it’s ugly.

Two of the last three games, Strome has been relatively bad. He scored twice against Washington, which was a good game for him, but the games against Pittsburgh and the Isles were just bad.

Strome’s role for now is fine. He’s going to have good games and bad games. He just won’t be overly consistent.

In the short-term, Strome does the job. The Rangers will need to address their long-term plans at center at some point, because as of now it’s just Mika ZIbanejad and Filip Chytil. I suspect that will be done in the offseason though. 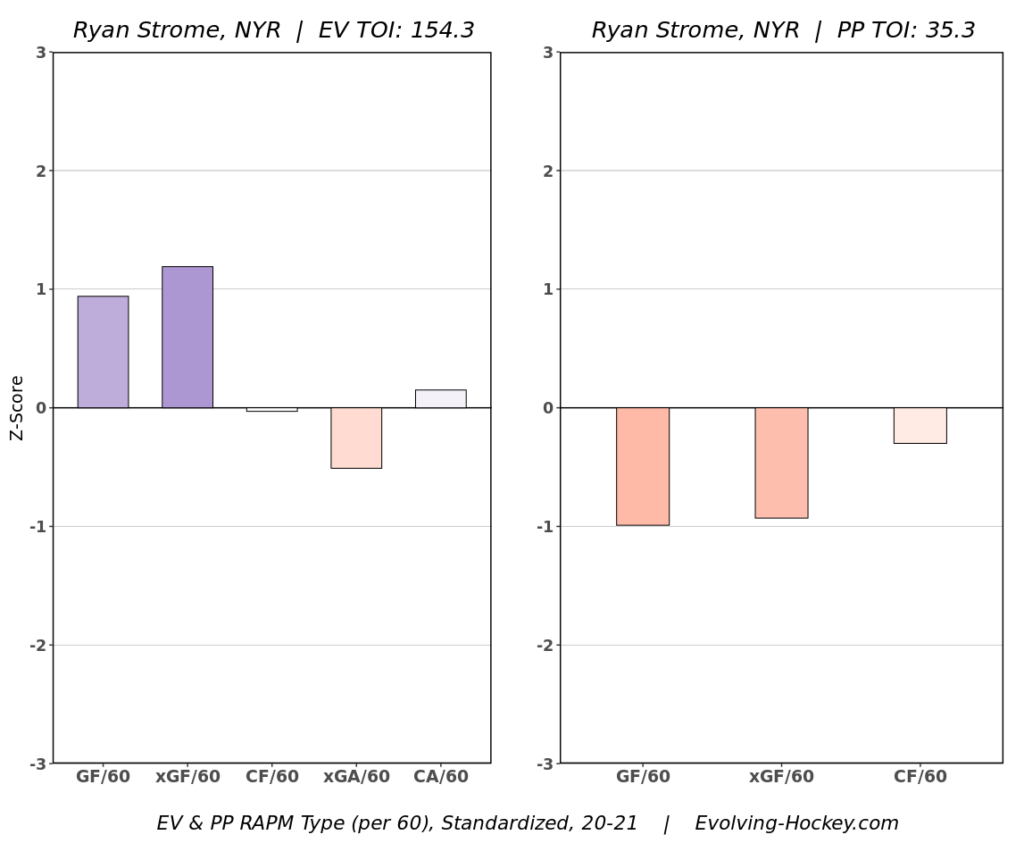 What is a little surprising is his ineffectiveness on the powerplay this year. He was solid last year, so perhaps some of this is Mika Zibanejad related, as his struggles have impacted a lot of players in the lineup.

For now, Strome is going to be what he continues to be. He’s a streaky center. He had a four game point streak before it was snapped on Monday. He’s going to be rough defensively, but click with Panarin enough to be serviceable offensively. Ryan Strome may not appear to be in the Rangers future, but he’s a stopgap and a clear win in the Ryan Spooner trade.