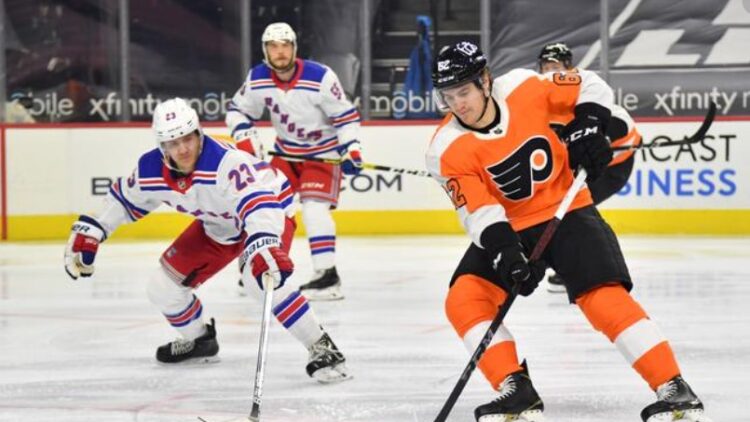 Adam Fox, currently leading the Rangers in ice time this year, broke onto the scene in a big way for the Rangers last year. In his two seasons in the league, Fox has shown that he can play in a shut down defensive role while also contributing offensively. During his 70 appearances last season, Fox totaled eight goals and 34 assists for 42 points. In addition, he played on the second powerplay unit. Thirteen of his 42 points came in extra man ice time.

And since the start of the 2020-21 season, David Quinn has only leaned more heavily on Fox. He and Ryan Lindgren have solidly held onto top defensive pair duties. With changes to the structure of the top powerplay unit, Fox has spent even more time quarterbacking from the blue line.

While Rangers as a whole have been off to a slower start offensively this year, Fox still manages to make an impact in every game he plays.

The Rangers’ decision to remove Tony DeAngelo from the roster in addition the absence of K’Andre Miller for the last two games and Jacob Trouba for the next 4-6 weeks, has left the Rangers’ defense — especially on the right side — feeling pretty light.

With the situation and Fox’s solid play, he has been logging significantly more ice time than in games past. While Fox has handled things so far, how sustainable is this?

Just how much ice time?

Fox is averaging 25:18 in time on ice this season compared to 18:54 last season. Fox’s 379.42 total time on ice is 23rd most of all defensemen in the NHL. This is the case despite some defenseman having appeared in as many as five games more than him this season.

Furthermore, Fox has recorded the third most ice time of all NHL defensemen who have played in 15 games this season.

To top this all off, in Thursday night’s game against the Flyers, Adam Fox recorded 30:16 in time on ice between regulation and overtime. He also led the team in shifts, recording 30 in total averaging at 1:00 minute.

What to make of the uptick

Fox has clearly been playing extremely well this season. The new defensive system under Jaques Martin has made his role clearer and the defense as a whole has been indefinitely more consistent.

No matter the situation, Fox is a calm, confident presence on the defensive end that helps establish the pace and success in transition play. He absolutely deserves the ice time he is getting and the roles he is serving on the penalty kill and the power play.

Clearly the decline in the available roster players also plays a big part in him seeing so much ice time. As arguably the Rangers most consistent defenseman, the question becomes: will Quinn relying so heavily on a talented young player help or could it eventually hurt him?

Typically, you’d expect that getting big minutes in games is great for a young player, but — especially considering the condensed season — there could be a risk burnout or injury.

If something liked this happened, losing Fox would be absolutely detrimental — especially to the roster in it’s current state.

One would assume that the coaches and staff are all on top of monitoring how Fox is feeling after outings like the one he had on Thursday night. However, it also can be said that any young player that is performing as well as Fox is will likely do and say anything to keep that ice time.

Hopefully there will come a day where the defense won’t have to lean so heavily on Fox. Until then, expect to see a lot more of him — hopefully a healthy version.