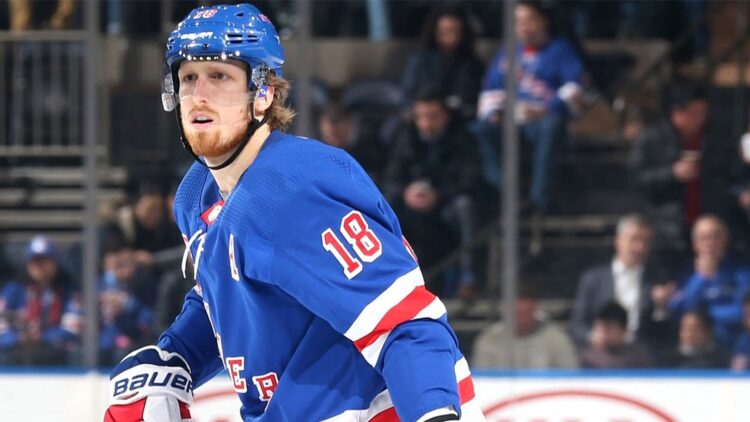 As news that the NHL salary cap may remain flat at $81.5 million next season, the discussion immediately shifted to amnesty buyouts. It’s a natural progression in conversation, as any conversation that begins with a change from the expected leads to discussion about how to adjust and provide alternative measures. For the NHL, this means amnesty buyouts, and how teams may be allowed one amnesty buyout if the cap stays the same.

An amnesty buyout is a regular contract buyout, but the cap hit doesn’t stay on the books. So unlike the buyouts of Kevin Shattenkirk or Dan Girardi, which are on the books through the end of 2022-2023, if the Rangers choose to go the amnesty buyout route, the cash paid out would be the same as a regular buyout, but they’d remove the cap hit completely from their books.

Buyouts were already on our minds this offseason, as there are several big money contracts that have one year remaining. If the salary cap was going to $84 million-$88 million, as originally projected, a buyout wasn’t needed. Now, with potentially no cap penalty, it opens options for the Blueshirts.

The player that has the biggest cap hit, but also potentially the biggest PR nightmare, is buyout out Henrik Lundqvist. Hank has one year left on his deal at an $8.5 million cap hit. It’s clear Igor Shesterkin is the future and will be given the starter’s reins going forward. What we don’t know is the plan for either easing Shesterkin into a full time role and/or the plan for the backup.

Personal feelings aside, buying out Lundqvist makes sense if there is no cap penalty. The Rangers would be able to put themselves in a position to take advantage of the reduced cap ceiling (more on that in a future post…gotta spread that content out) by freeing up $8.5 million.

Staal is the other name mentioned all the time with buyouts, and he was another legitimate candidate to get bought out this offseason. Staal carries a $5.7 million cap hit for next season and, like Hank, is unlikely to be re-signed once his contract runs out. His cap hit is the second highest on the blue line and fifth highest on the team. He’s also the longest tenured Rangers skater.

It’s clear that Staal has seen better days, and he’s more of a liability on the blue line nowadays. That said, there aren’t many in-house options to replace his minutes on the left side right now. Short term options are probably available via free agency, but still food for thought.

Smith is the other “big” contract left with one year on his contract and a $4.35 million cap hit. Smith is another guy who has seen his role replaced by younger players, and Smith’s future is clearly not in New York. He’s been bounced around the lineup and hasn’t complained, and is versatile enough that he can play forward or defense.

The thing with Smith is that he has value elsewhere in moves that don’t waste an amnesty buyout. I’ve been beating this drum since last summer, but Smith to Ottawa makes too much sense. Next year Smith carries that $4.35 million cap hit, but only $2.35 million in actual dollars once his bonus is paid out. That makes too much sense for Ottawa. As for Smith, waiving his NTC to potentially play with Thomas Chabot might be his last shot at one more contract before retiring.

The ultimate wild card. Trouba just finished the first year of his seven year, $8 million deal. He’s got six years left at that $8 million cap hit. Trouba underwhelmed in New York this year, but did have a better second half of the season while clicking with Brady Skjei.

The concern with Trouba is that he takes up 10% of the cap ceiling right now. There’s no problem paying out that kind of money to your top players, but Trouba didn’t perform like a top player and was arguably the Rangers’ third best RD. By using the amnesty buyout on Trouba, the Rangers free up that money, but also take a risk that Trouba succeeds elsewhere.

Who do we at BSB think should be the amnesty buyout, if the league goes that route? Well, that’s a post for another day. Again, gotta spread out that content.