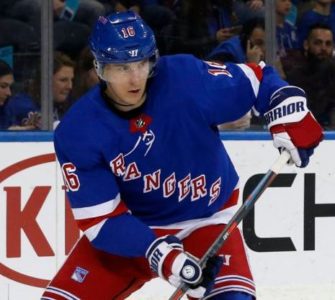 As more and more talk about the NHL season resuming surfaces, there have been discussions about next season as well. Whenever a decision about this season is made, it will have an impact on next season, even if that decision is to cancel the remainder of this season.

The biggest impact for next season, aside from start date, is the salary cap. Initially projected to be anywhere between $84 million and $88 million, the suspended season has thrown a monkey wrench into those plans. There are rumblings that the league may even keep the salary cap ceiling of $81.5 million flat for the upcoming season, which is a kidney punch for a lot of teams.

For the Rangers, it means some of their difficult decisions which they may have been able to punt to next season are now coming straight at them. At the forefront will be the contracts of Tony DeAngelo and Ryan Strome. The Rangers probably opened up the space for DeAngelo by trading Brady Skjei, but if the Strome contract estimates are accurate –and they usually are– then the Blueshirts have a compounded issue on their hands.

As it stands, the Rangers will have about $14.5 million in cap space for next season if the ceiling is at $81.5 million. Strome and DeAngelo remain their most expensive RFAs, but Alex Georgiev and Brendan Lemieux are also RFAs (and Phil Di Giuseppe). All of them are arbitration eligible either, so they actually have some negotiating power. Plus Jesper Fast is a UFA.

If the cap does remain static, then the Rangers likely can’t afford to keep everyone. Heck, they probably couldn’t keep everyone even if the cap went up. This just compounds issues.

There are rumblings of compliance buyout(s) to help teams through the cap concerns. Although that is a story for another time.

Categorized: Around the League