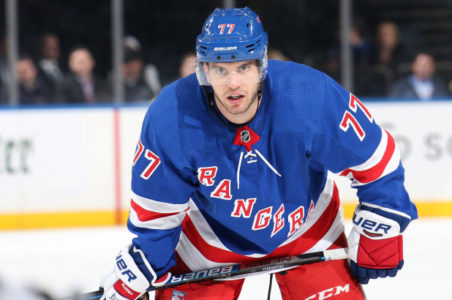 In case you missed it, Eric Francis noted on Twitter that Bill Daly has let NHL General Managers know that the projected NHL salary cap ceiling next season will be between $84 million and $88 million.

Bill Daly announces he’s told teams the salary cap is projected to be between $84 to $88.2 million next year

This represents at least a $3 million increase, and potentially $7 million in additional cap space. Taking the middle ground of $86 million, above the $85 million we’ve been using around here, the Rangers have a little more wiggle room. This may alter their plans.

Buyouts are the major talking point for next season. The Rangers already have a shade under $7.5 million in cap space committed to buyouts next season, certainly less than ideal. The buyout discussion has been focused around Marc Staal and Henrik Lundqvist, although Brendan Smith’s name has popped up.

The good news is that even without a significant cap increase, the Brady Skjei trade has made a buyout completely unnecessary. The additional cap space –we had been working off an $85 million cap– amplifies this point. The Rangers do not need to buy anyone out.

I repeat. The Rangers do not need to buy anyone out.

One last time. The Rangers do not need to buy anyone out (Caveat: Assuming any salary coming in is offset by salary out).

Lundqvist’s future with the Rangers is certainly in question, and there’s a chance this April may be the last time we see Lundqvist on Broadway. While the focus had been on a buyout, trades had come up because Lundqvist comes with an $8.5 million cap hit, or $4.25 million if retained at 50%.

The buyout point above stands true to this point as well – the Rangers do not *need* to trade Henrik Lundqvist. At the risk of sounding like a broken record, trading Hank is just as irresponsible as buying him out. He doesn’t get anything in a trade and Alex Georgiev is the guy with trade value.

Of course this assumes there isn’t a mutual split by some other means. Remember though, the Rangers do need to expose a goalie next season, and neither Lundqvist (UFA) nor Igor Shesterkin (exempt) will be exposed. So they need a backup signed through the expansion draft.

The Skjei trade showed us that the Rangers essentially chose Tony DeAngelo over Skjei, which means one less tough decision to make this offseason. They have other tough choices to make (Georgiev, Ryan Strome), but the added cap space means they can take on additional cap space in a trade. With left defense an issue, perhaps a trade is on the way this June?

The boring and smart answer, the Rangers still need to account for about $7 million in potential bonuses. Any bonus money that can’t be applied to the cap would then hit the Rangers the following season. You never know when you’ll need cap space, and if the Rangers are unable to find a viable trade option, saving the cap space is the best bet.