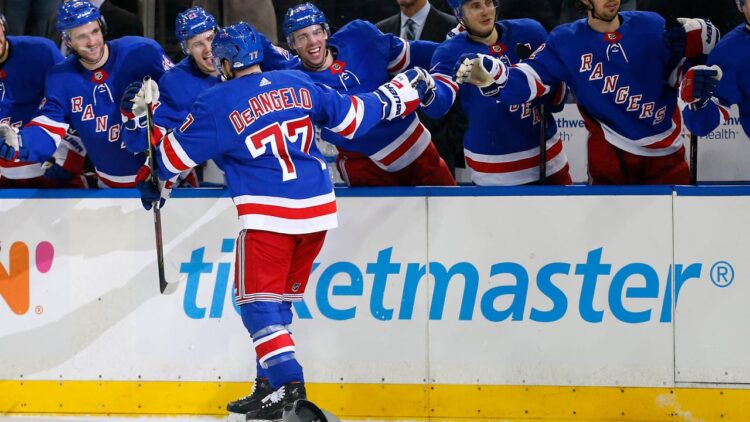 What a year it’s been for Tony DeAngelo. A little bit of an afterthought heading into the season, DeAngelo has had a career year. If the season does not finish, he will end this season with a line of 15-38-53 in 68 games, good for 4th on the team in scoring, and most among defensemen.

The season may have seemed like it came out of nowhere, and in some regards it did. DeAngelo’s prior season was 4-26-30 in 61 games, so he’s close to doubling that output. He also came close to tripling his shooting percentage (10.1% this year, 3.6% last year). While there isn’t much of a career average for us to use as a baseline, it is worth noting that defensemen rarely sustain a 10% shooting rate.

What we can infer (again, infer, not conclude) is that DeAngelo’s goal totals will go down a little bit. A 6% shooting rate gives him 10 goals so far this year (about a 15 goal pace), which is likely more in line than the 20 goal pace he was on this season. Not a major difference, but worth noting.

Also worth noting is DeAngelo’s primary points (goals/first assists) is actually a little low at even strength. He has 9 goals and 10 1st assists (11 2nd assists), which is a 63% primary points rate. It’s about the same (15 goals, 18 1st assists, 20 2nd assists) when you include powerplay numbers. We can again infer that secondary assists may come down. May.

Now none of this is to say DeAngelo is bad or that his numbers are inflated. It’s just he may see a 10%-15% dip in points. Again, none of this is certain, just leveling expectations. This is critical because right now, as the lineup is currently constructed and utilized by David Quinn, DeAngelo is the 3RD on the team, behind both Jacob Trouba and Adam Fox. Until the team decides to use a righty on the left side, this will remain the case. Spot in the lineup matters.

All this brings us to the Evolving-Hockey contract projections for DeAngelo. These are much more palatable than the Ryan Strome projections, and has the projected term at five years and $5.9 million. Here’s the full breakdown:

Again, these guys are rarely wrong, even if you don’t necessarily like what you see. That said, these numbers are about in line with what you might expect from a 23 year old, 60 point defenseman.

For the Rangers, the question isn’t about whether they can afford him. They can, especially since they traded Brady Skjei, essentially making the choice to keep DeAngelo over Skjei. The question is risk management. Is this season a blip? Possibly. Do you take a chance with young-20s blip over a mid-late 20s blip? Absolutely. Every contract comes with risk, but the risk here appears to be minimal.

In the current market, paying $6 million for 20 minutes and about 55-60 points is a bargain. Unlike the Strome projections, this seems to be a no-brainer for the Rangers.