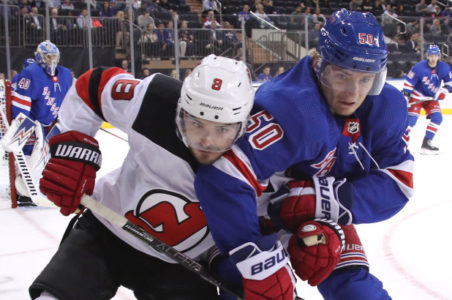 The Rangers made a few much needed roster moves yesterday, waiving Micheal Haley, sending Lias Andersson to Hartford, and recalling Tim Gettinger. While it may not seem like the last two were much needed, they absolutely were. As per usual, I have some thoughts.

1. Starting with Haley, this was much needed to correct a bad decision made after training camp. No matter which way you slice it, Haley was not needed in a rebuild. Greg McKegg is significantly better in this role, and there’s no real denying this. It’s not a slight on Haley, it’s acknowledgement of a dying breed in hockey: the pure fighter. Haley is one of the last ones.

2. Moving on to Gettinger, since there’s we all know that Andersson is going to take a bunch of bullet points. Gettinger is getting his second call up, playing four games last season. I don’t have much on him, but it is worth noting he was called up before both Boo Nieves and Vinni Lettieri. If there is anything to take away from this call up, it’s that Gettinger is higher on the depth chart than both Nieves and Lettieri. That’s it.

3. Now to Andersson. Starting with the “demotion” to Hartford, let’s first pump the brakes on the “bust” and the “demotion” talk. Being sent to the AHL, especially as a 21-year-old, isn’t necessarily a bad thing for the player. David Quinn was quoted saying he wants to see more offensively out of Andersson, and it’s clear that wasn’t going to happen when he’s saddled with Brendan Smith and McKegg. Getting top line minutes in Hartford gives him the offensive chances to build his confidence. This worked with Filip Chytil.

4. Regarding how Andersson was handled at the NHL level, it is disgraceful. Andersson had a strong camp, earned his role on the team, and then was given less than 10 minutes a night. He was a top penalty killer then was removed from the PK. If he had such a strong camp, had better numbers than Brett Howden, and was visibly better than Howden, then why wasn’t he moved up in the lineup? He may not have succeeded, but at least we would have seen what he could do with two actual forwards next to him.

5. It’s relatively unclear if the Rangers had a plan with Andersson, and this dates back to the draft. They took him at #7 overall because they pegged him as NHL ready. He wasn’t, and that 2017-2018 season was a disaster because of it. The 2018-2019 season saw improvement, but he wasn’t holding a spot until after the trade deadline. This year he was one of the best in camp and they didn’t know what to do with him. What were they drafting him as? What is the plan? Why was he picked? Why can’t he move up? This is nothing short of a colossal failure by the Rangers in terms of asset management. There’s time to salvage this, but they need to figure it out, and fast.

6. The previous point has nothing to do with Andersson’s performance on the ice. His role is to play the best hockey he can, and he was solid defensively on an atrocious defensive team. His role in Hartford is to continue to play his best hockey. That’s it. The onus here is on Jeff Gorton, Chris Drury, and Quinn to figure it out. This is poor asset management.