Throughout the young season, the big question that has been talked about since the preseason is where Lias Andersson will play. There has been a lot of talk about why he can’t get off the fourth line, and to David Quinn’s credit he did respond candidly saying that the young center tends to make a play and then watch. He wants Andersson to continue to follow up on the play. Yet despite looking good, Andersson hasn’t been moved up the lineup yet.

I was asked on Twitter what the numbers are that back up our claims that Andersson should be moved up. With enough games under our belt, we can dive deeper into Andersson’s performance and look to see if the claims can be justified based on performance, and not just the notion that he’s a high draft pick with a middle-six ceiling.

*Worth noting that this was again written before I went away. The numbers may have changed a bit, but the overall point going forward still stands. Also worth noting that I have not looked at the full numbers prior to writing this post – so enjoy the ride as I look to see if the numbers back up my eyes. 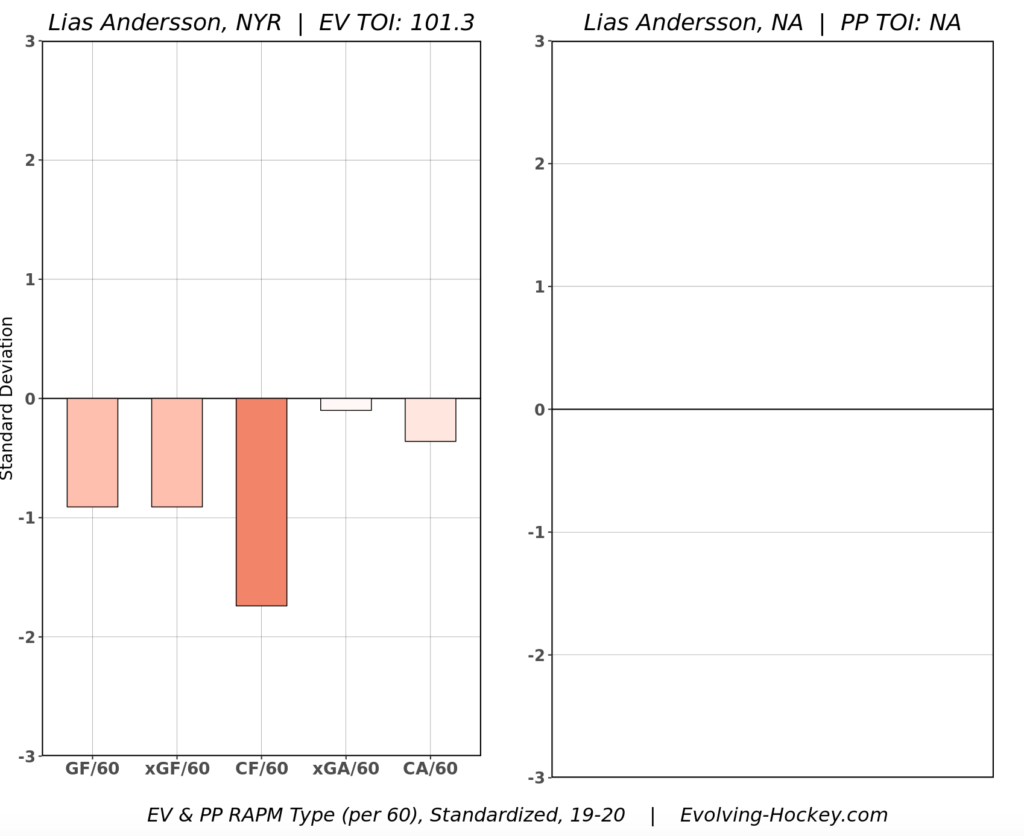 The first thing we look at is an overall graphical representation of how Lias has been playing. This is about what is expected so far. Focusing on offense first, Lias hasn’t generated much playing on the fourth line. A grain of salt is needed, since his best offensive linemate is actually a defenseman. The defensive numbers are outstanding when you take into account the Rangers are historically bad defensively.

Looking at the numbers, Andersson is dead last on the team in CF/60 at 40.28 and third to last (ahead of Mika Zibanejad and Chris Kreider!) in xGF/60 at 1.8. So yes, offensively he’s done nothing. This may be what Quinn is referring to, as following up the offensive play, or lack thereof, would impact these numbers. This is a little surprising, but then I look at his linemates and I am no longer surprised. It’s very difficult to generate offense when your common linemates are a defenseman, a pure fighter, and a journeyman.

Defensively, Andersson is second on the team in CA/60 at 60.42 (yikes), so while the team is a train wreck in this regard, he’s at least good comparatively. Only Jesper Fast has been better thus far. He’s also second to Fast on xGA/60 at 2.4. So defensively he’s at least holding his own. So at least those fundamentals appear to be there.

Comparatively to Brett Howden, whom Andersson will always be linked, Howden is right behind Andersson offensively with a 40.74 CF/60 and 1.86 xGF/60. So Howden is getting the 3C minutes with actual NHLers in Kaapo Kakko and Brendan Lemieux, but doing absolutely nothing with it. Defensively Howden is one of the worst players on the team.

Based on the numbers comparatively to the guy ahead of him in the lineup, Andersson has performed at the same level as Howden with far less to work with. That suggests Andersson might be able to produce more if moved up the lineup. It’s no guarantee, but the numbers certainly suggest he’s earned the chance.