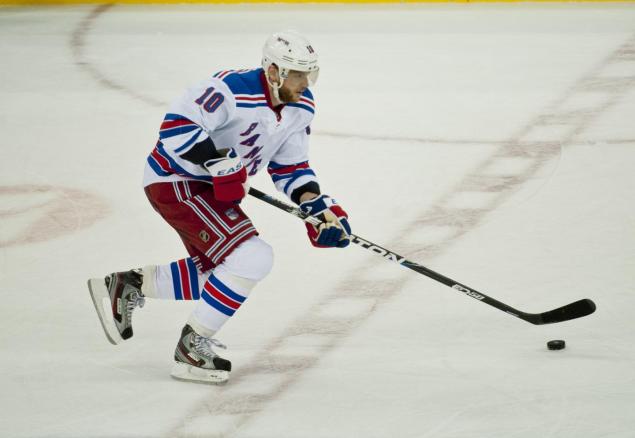 – This is a rare trade where I think both sides have been pleasantly surprised with what they ended up with.  Columbus fans seem giddy with what Marian Gaborik has done so far and almost in disbelief that the Rangers didn’t know what they had in him, along with Artem Anisimov and Brandon Dubinsky.  On the flip side, few Rangers fans knew much of anything about any of Derick Brassard, Derek Dorsett and John Moore, but Brassard has already shown flashes that suggest he could single-handedly make up for a lot of Gaborik’s production, Dorsett sounds like he’ll be a perfect Blueshirt soldier whenever he takes the ice, and watching Moore skate has made it hard not to think of what Ryan McDonagh’s greatest quality does for him.  It seems pretty clear that both teams came out of the deal better than they were before.

– Blue Jackets beat writer Aaron Portzline raised eyebrows when he wrote that Dorsett might have been the toughest player for Columbus to part with.  It sounds a little surprising given the obvious skills of Brassard and the potential of Moore, but neither of those players had established themselves as go-to players for the Blue Jackets yet.  Dorsett was an alternate captain with a decorated history of standing up for teammates, playing his heart out and doing generally everything that coach John Tortorella loves.  Will he be the next Brandon Prust in New York?  The comparison certainly seems to make sense.

– Following the trade there were a lot of questions about how the acquisition of Brassard would affect a potential Brad Richards buyout.  There are two ways of looking at it:
1) Derek Stepan’s emergence as a bona fide No. 1 center made Richards less important and if Brassard proves he can handle the No. 2 job, then Richards may be disposable given his price tag.
2) Having three solid centers may seem like a luxury, but depth down the middle has been essential to nearly every Stanley Cup winner in recent years.  Richards may be underperforming, but having him as a No. 2 and Brassard as a No. 3 or vice versa gives the Blueshirts some very solid pillars to build around.  Add Oscar Lindberg to the equation and New York should be set down the middle for years to come.
In the end, I don’t think Brassard really changes what the Rangers should do with Richards.  If he is abysmal again next season, then New York must give serious thought to severing ties.  But it won’t happen this summer.

– The trade really helped replenish New York’s forward depth for the 2013 playoff run, but it will be really interesting to see how things play out over the summer and next fall.  By my count, the Rangers currently have 12 forwards that are or will be locked into deals (Nash, Richards, Callahan, Clowe, Brassard, Boyle, Dorsett, Pyatt, Powe, Asham, Stepan and Hagelin).  Now obviously plenty will happen between now and then: it’s not a given that Clowe re-ups if his contract demands are as ridiculous as has been rumored and New York may ship any of Boyle, Pyatt, Powe and Asham out of town.  Still, there are four ballyhooed prospects (Chris Kreider, J.T. Miller, Oscar Lindberg and Jesper Fast) that should be knocking on the door.  Where do they all fit?  Maybe a guy like Fast spends a whole season in the AHL before hitting Broadway.

– Ah, the rumored Clowe contract demands.  I find it very difficult to believe that Clowe has been asking for eight-years, 34 million, it just really doesn’t make any sense given his lack of production.  Could the Rangers lock him up for the three-years, $12 million I’d like to see?  Maybe not given the way the market seems to be going under the new CBA.  Still, a guy that has had injury problems and knows that the stats show he’s declining must know that he has no chance at an eight-year deal.  I like what Clowe brings to the table and he’s certainly been one of the guys that has rounded out New York’s depth, but I’m still not sold on the idea of him being a Ranger long-term, ridiculous contract or not.

– Will we see a Girardi/McDonagh/Staal/Del Zotto/Moore/McIlrath blueline next year?  Anton Stralman may have something to say about that, but it could happen.

– I’m not expecting Columbus/New York to turn into a rivalry in the truest sense of the word – there’s just no bad blood on either side – but it will be pretty fun to watch some of our favorite ex-Rangers for the next few years.  Vinny Prospal’s future is a question mark, but expect Gaborik, Anisimov, Dubinsky, Tim Erixon and Fedor Tyutin to be on the other side for the foreseeable future.  Those should be fun games.