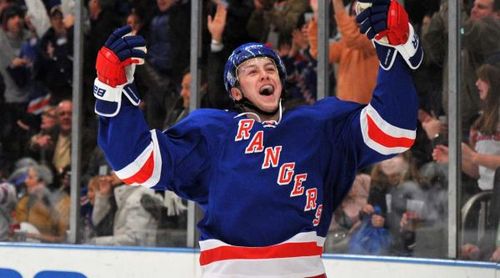 Stepan for the Steven McDonald?

Unless your name is Ryan Callahan, then you likely haven’t even come close to winning the Steven McDonald Extra Effort Award. Cally has won three of the past four awards, and will certainly be in contention this year for his second in a row and four in the past five years. But, there is a growing sentiment that Derek Stepan should garner most of the attention this year, and this isn’t without cause.

Stepan has been unreal this year, better than anyone could have imagined. Currently second on the team in scoring (14-20-34 in 40 games), Stepan is on a six game point scoring streak, and has 24 points since the start of March (21 games). The offense is impressive and a true testament to Stepan’s skill, but it’s on the other side of the puck where he has made the most improvement.

Stepan is currently at 46.8% on face offs, which represents a 10% jump from two years ago, a sharp increase in an area that was considered a glaring weakness. Many thought that Stepan would eventually become a winger because of his face offs, but now it is less of a weakness, and something that he has been improving on year-to-year.

But perhaps the biggest change has been Stepan’s defensive play. He’s never been bad, but he’s taken a giant leap forward this year. His DGVt (6.4) is outstanding. His Corsi Rel QoC of .321 is second on the team among forwards playing 30 games. His RCorsi (9.0) and CorsiON (10.61) are among the team leaders as well. Put those two together and you have a player driving puck possession against other team’s top puck possession drivers. In short, he’s succeeding against tough matchups.

There’s also the on-ice factors, such as Stepan playing goalie a few times and saving some goals. He has laid out his body time and time again, and is sixth on the team in blocked shots. He’s never going to catch Cally in that department, but he’s shown willingness to do the dirty work to get the job done. Let’s also remember that in his first season, he was never used on the penalty kill. Now, he’s averaging two minutes a game on the kill. That shows work ethic and trust from the coaching staff.

The voting for the Steven McDonald award has opened, and you can text your vote to the Rangers if you haven’t already. Cally is probably the front-runner this year, but Stepan has a great case for the award this year. He’s been the best forward not named Rick Nash this season.