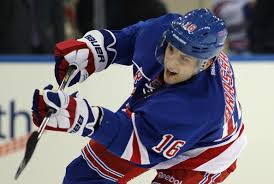 While in Columbus, Brassard flashed glimpses of skill but with careful analysis it was actually more than that. Like Rick Nash, Brassard was surrounded for the most part by subpar talent, with defensive coaches and yet was still able to put together some productive campaigns. His problems in Columbus were his ability to stay healthy and the expectations that go with being a top ten draft pick. If Brassard can stay healthy the ‘Marian Gaborik trade’ could be a rare hockey trade that becomes a win-win.

Brassard is young, talented and exactly what the Rangers need as their second line pivot – someone they can build around. He has playmaking skills to rival Stepan but would actually be a nice compliment to the Rangers home-grown center.  Assuming Brassard can keep his play up (better yet, keep improving) the Rangers would likely explore buying out Brad Richards sooner rather than later and the removal of his cap hit would be a huge aid to the Rangers future as they look to re-sign their own and keep players such as Ryane Clowe. This is why Brassard’s development is so crucial; his impact goes far beyond cementing the second line center position but has ramifications short and long term and all over the roster.

Back to the win-win element of that Gaborik trade. Out of the media scrutiny of New York, Gaborik appears to be playing with freedom and is once again productive. After losing Rick Nash Gaborik is exactly what the Blue Jackets fan base needed; an elite talent that offers hope for the future. In the package the Rangers received for the Slovak, New York recruited upside and depth. That upside though, could be substantial. If John Moore can play anywhere near to his own draft position and hype and Derek Dorsett can bring his leadership, physicality and overall package the Rangers will have pulled off a great trade despite giving up a quality talent.

It all however, begins and ends with Derick Brassard. If the Rangers can manage their young center carefully and put him in a position to succeed (Ryan Callahan as his right winger is a good start) then the Rangers have potentially hit a home run. It’s definitely trade fall out that’s worth watching long term. Consider the long term impact of Rick Nash in NYC and who knew the hockey hot bed that is Columbus, Ohio could offer so much future potential for the big market New York Rangers.