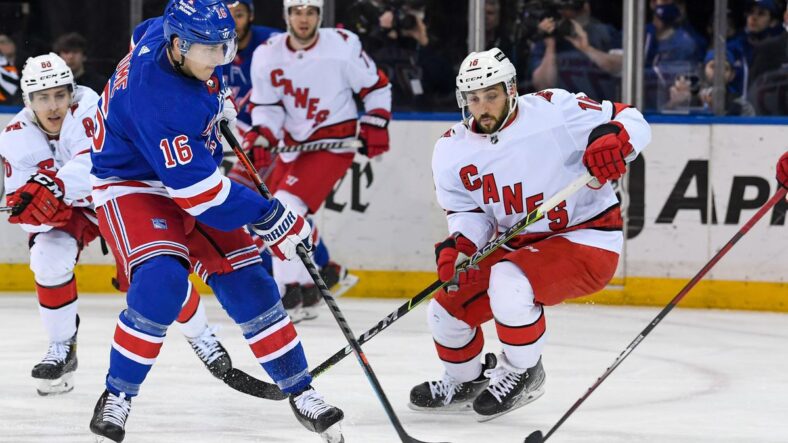 Tonight the Rangers kick-off their second round matchup down in Raleigh against the Carolina Hurricanes. If you’ve read any predictions about this matchup, you’re probably coming away with the notion that the Rangers are about to get steamrolled, and the Hurricanes are too much for the Rangers. Really, none of the ‘experts” are picking the Rangers to win this series.

Certainly, our boys didn’t play their best hockey against Carolina during the regular season. Their advanced stats (namely Corsi % and xG%) were also far better through out the year than the Rangers. However, what happened from October through April is largely irrelevant now. What matters at this point, is understanding how the Hurricanes play and what weaknesses the Rangers can capitalize on.

Much like I did for the Penguins series, I’ve broken out the Hurricanes’ systems in both the offensive and defensive zones and how the Rangers might adjust their tactics to overcome them.

Similar to the Rangers, Rod Brind’Amour mixes two standard forechecks, a 1-2-2 and a 2-1-2 (depending on game situation). Both are deployed aggressively, meaning they are sending 2-3 guys in deep to force turnovers and will regularly use their defensemen to pinch. The key difference I see here between the two clubs is that Carolina is much better at retrieving pucks after dump-ins, while our team is still a bit overly reliant on capitalizing on transition rushes to score.

Here is a perfect example of how the Canes’ systems create offense. In a 1-2-2 structure, their RD (Slavin) dumps the puck into the offensive zone. Trocheck (F1) wins the board battle and gets the puck to Teravainen (F2), who threads one to Domi (F3) for the goal. This is a play we are going to see a lot of if the Rangers keep their structure in the neutral zone.

The Hurricanes’ forwards are definitely going to be targeting our defensemen with these heavy forechecks. If you follow me on Twitter (shameless plug @thehockeysuit), you probably think I sound like a broken record, but getting our F3s back to support our defensemen is going to be vital. If the Rangers over anticipate a breakout and get too far into the neutral zone when our Ds have the puck, this could be a short series.

The other key component here will be an adjustment in how we break out of the zone. The Rangers tend to rely on our d-men carrying the puck up ice. However, I don’t think they will have as much time on the puck as they did in Pittsburgh.  Getting those quick, one-touch passes up to our wingers could be an effective way to catch Carolina over committing.

The Hurricanes mostly play man-on-man in the defensive zone. This is very different than the Rangers and the Penguins, who play zone defense. Man-on-man is exactly how it sounds. Players stick to their checks and will follow them around the zone, as opposed to clogging the slot. While this is certainly a more risky strategy (AV actually employed this during his tenure with NYR), in theory, it puts more pressure on the opposing offense to create turnovers. 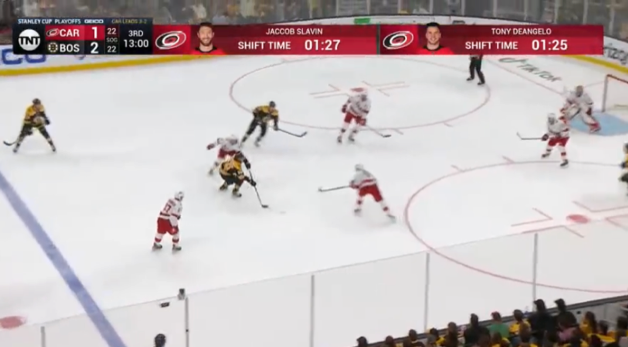 While not a perfect image, what man-on-man often results in is high pressure at the blueline. Here in the image above you can see there’s 3-4 Canes between the blueline and the slot since there are 3-4 Bruins up high. The Hurricanes are looking to force the issue, rather than peeling off to protect areas of the zone.

How the Rangers beat Carolina’s defense

Man-on-man is very difficult to execute for sixty minutes. Player conditioning has to be superb. During the season there’s more off days and less mileage on your body, so it’s a little bit easier to maintain this style. However, after a grueling 7 games series, I wonder if this style of play can hold up.

As I said earlier, the Canes were one of the best teams in the league at suppressing shots and scoring chances during the regular season. During the first round, they weren’t even in the top 10. The Bruins didn’t win, but they largely outplayed them for much of the series.

To beat the Hurricanes’ tactics, the Rangers are going to have to create confusion. Scissor plays (wingers switching sides), well timed pinches, and quick puck movement up high will be in order.

Here you have Brad Marchand, a LW, switching sides, losing his check and burying a shot from the right side. If Brad can do it, our top 6 can as well.

The narrative from the media is largely centering around Tony DeAngelo and other former Rangers. While it certainly makes for good headlines, the Canes aren’t a lopsided team talent-wise. They have that rare combination of skill and grit up and down the roster. This isn’t going to be like the Penguins series at all, in trying to figure out how to stop one line (namely Crosby & Guentzel).

Because of Carolina’s depth and their inability to stay out of the box, the powerplay, Igor, and Gallant are going to be the x factors for me, rather than specific skaters. Can we continue to bury goals on the PP and get some scoring from PP2? Can Igor steal a win or two in Raleigh? Can Gallant get the right matchups out on the ice at the right time?

Those are the questions I have going into this series. If we can find an answer to them, maybe we can defy the odds and take another forward step.