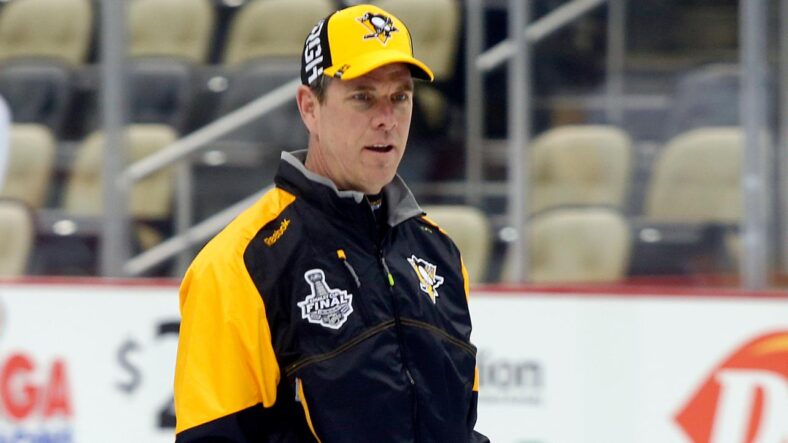 Yesterday, Rob broke down the Pittsburgh Penguins analytics and highlighted how they rank in Corsi (shot attempts) and expected goals (shot quality). Overall, they are strong team defensively and have scoring depth that will likely make this a tough series.  For this post, I wanted to get beyond the stats and try to explain why they are so strong defensively and how they go about generating some of the figures Rob delved into by looking at the Penguins systems.

To no surprise, watching Sully’s Penguins is very similar to watching his mentor’s (John Tortorella) Columbus Blue Jackets, the 2009-2012 Rangers to some extent, or his Tampa Bay Lightning back in the day. This team is always pushing the pace, back checking, and hunting down pucks, even late in periods or when the team is up by 2+ goals.

This isn’t a team that is going to try to choke off games or sit back and play neutral zone traps. They are going to come after you in waves. And while most of their core players (Crosby, Malkin, Carter, Letang, Dumoulin, etc.) are all on the wrong side of the 30, this team can still wheel and forecheck with the best of them.

In the offensive zone, Sully mixes two standard forechecks, a 1-2-2 and a 2-1-2 (depending on game situation). Both are deployed aggressively, meaning they are sending three guys in deep to force turnovers.

The image above is a perfect illustration of what an aggressive 1-2-2 forecheck looks like. Here, Pitt’s LW (#23, McGinn) is the F1 and retrieving a puck down low. F2 (RW, Kapanen) is in support and can play off of F1 to help establish a cycle or give a low option below the goal line. Domoulin (who is actually a D) is playing the role of F3, can crash the net or get in on the cycle depending on how the play develops.

You can’t see them in the picture, but typically their defense will pinch to provide support or torpedo into the high slot as another scoring option. Letang is a master of timing these.

Kris Letang tucked that one in ever-so-precisely into the top corner of the net. Yep, this one will be your @JagermeisterUSA Shot of the Night. pic.twitter.com/eh2V0ntu7i

How the Rangers beat the Penguins aggressive forecheck

Adam Fox and K’Andre Miller are going to be key in this series, as they are the two that are going to have to win puck battles and create that crucial first pass to beat the Penguins forecheck. Skating the puck out of the zone on breakouts will be difficult against this team, so quick bumps off the boards, or threading breakout passes are going to be massively important.

The other critical component to beating this offense is having our weakside forwards cognizant of the fact that Pittsburgh’s Ds aren’t going to just man the blueline. Their defensemen are an integral part of the offense and they will need to be defended against as if they were wingers.

Like the Rangers, Sully employs a mostly zone based defensive scheme, meaning the team defends in layers and seeks to protect areas of ice, rather than chase their checks around the DZ. There’s some nuance here, but the below picture mostly encapsulates what a zone defense looks like. 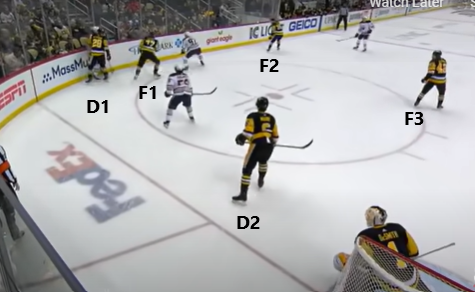 I’d call this a moderately aggressive structure since they are not playing a collapsing zone setup where all five guys are blocking shots below the face-off circle, nor are they doing the swarm thing that some teams play where all five skaters are attached to their checks and all over the zone. They are somewhere in the middle.

How the Rangers beat the Penguins systems

Because of the speed of the Penguins, they can switch to a somewhat passive setup to hunting pucks quickly. Kapanen, Rakell, Guentzel, and Rodrigues are all extremely good at winning board battles, but also putting pucks in the back of the net. These guys are skilled but will play heavy on the forecheck and in their own end zone.

The Rangers are going to have to up their battle level along the boards and in the slot. They’ve been better on the forecheck since the deadline, but they still can be a bit reliant on counter attack hockey. Those opportunities won’t be as plentiful in the playoffs, so the need to win in the trenches and the goal mouth will be paramount.

The question I have going into this series is, how will Gerard Gallant deploy his lines? Will he match Mika against Crosby? Will he try to create size mismatches for Kreider? Or will he try to keep our first line against their bottom lines? Hard to know at this point. Either way, this team will have to give different looks.

I’m not going to get into the x’s and o’s here, as almost every team in the league plays some version of a 1-3-1 power play and a rotating box on the PK. The key here is the refs. Crosby endlessly gets the benefit of the doubt and past series against this team have been extremely frustrating to watch.

Pittsburgh’s PP was average this season, but I’d still like to stay out of the box against this team, especially on the road. Long story short, Ryan Strome needs to not take OZ penalties.