I initially wasn’t going to write another x’s and o’s post for a while. Judging by people’s tweets, it seems like folks are having a tough time grasping hockey tactics. However, I know a few of my real world friends and several “internet” compadres enjoy this type of stuff, so I thought sure, I’ll give it another go…

A couple of weeks back, we talked about different power play formations and how they are employed in the modern day NHL. Today we are going to discuss the other side of the puck and get into penalty killing tactics.

The three most common PK strategies are the Diamond, the Box, and the Wedge+1. Teams will use each of these penalty kills depending on what powerplay formation they are up against.

Let’s start off with the Diamond strategy, since that is what the Rangers normally see when they are setting up – or trying to set up – their Umbrella power play formation. 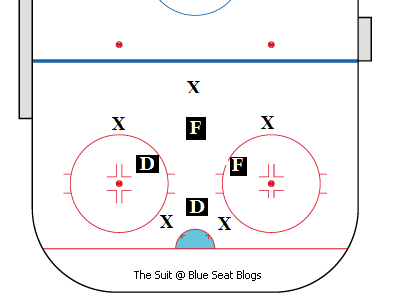 As you see in the chart, a high forward is set up to defend against the power play quarterback, another forward and a d-man take the guys atop the circles and a low d-man covers the slot.

Now, where a coaching philosophy can come into play is when you’ll see the Diamond collapse into the slot and cede the blueline or the opposite will happen and the penalty killers will go on attack mode.

More and more we are seeing very skilled teams collapsing less (the Capitals come to mind) and instead are aggressively attacking the three high shooters. The idea is less about trying to score shorthanded goals, but more about disrupting teams from getting into formation. 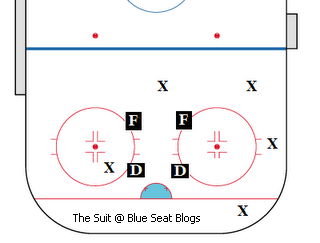 The Simple Box isn’t all that different than your basic low zone collapse formation during 5-on-5 hockey. The idea is to simply shut down the middle of the ice and eliminate prime scoring chances.

This strategy is most often used against the Overload, where you are basically allowing the other team to have the puck so long as they are along the perimeter. Using this strategy is more about having good stick work and not chasing after the puck carrier.

Another main difference in this strategy is the importance of having the weakside players keeping their heads on a swivel. The biggest threat to score is the opposing player who’s positioned at the far post, so defenders must pay attention to where this player is in order to cut off his passing lane.

Now you all know I’m a pro-Torts guy, but the penalty kill is the one area of the game where I disagree with his schematics. As we discussed in my forechecking systems post, the Rangers are an aggressive, puck pursuit team, yet they collapse to the net and block shot on the penalty kill as opposed to pressuring the points.

One would think an aggressive coach, with an aggressive 5-on-5 strategy would want his skaters pressuring the puck on the penalty kill too. Go figure… 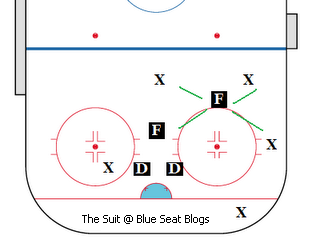 Finally, my favorite penalty killing schematic is the Wedge or Triangle +1.  This tactic always seems to spring someone for a shorthanded goal, especially when your name is Dave Bolland.

As you can see on the chart, the Wedge +1 situates three collapsing players in the slot in a triangle formation.  The extra man (F) is free to run around and create havoc along the perimeter.  When the puck is moved across ice, the roaming forward can take a spot in the triangle and and the left forward can go create havoc.

For the skaters in the triangle, their role is similar to that of the Box strategy in that they must contain the slot.  The one difference between this setup and the Box is that the weakside player has to always be responsible for the backdoor plays.  Since this formation is always rotating, every skater needs to be aware of the responsibilities of every position they rotate into. There’s a lot of thinking involved.

Ultimately with any strategy, be it offensive or defensive, it’s not just where you are on the ice, but what route you take to your position and what you do once you are in position. When it all comes together – watch out! Someone might be sprung…right Mr. Bolland?