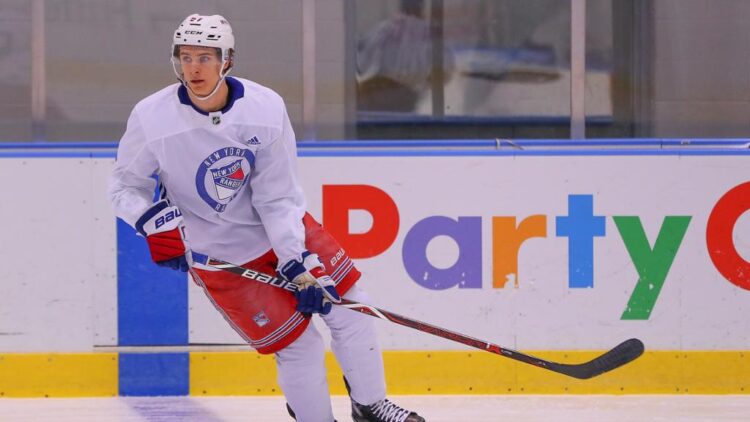 With all eyes on rumors, both at forward and on defense, the focus has shifted away from the number of NY Rangers prospects in Hartford. The question is less about the holes and more about how they are filling them. Logically speaking, Rangers call ups should be an option. But why aren’t they?

Morgan Barron fills a position of need, as the Rangers need center depth. While the Rangers don’t necessarily have that need now since they are healthy, they are one COVID exposure or puck to the ankle away from again seeing Barclay Goodrow as the 3C. That’s not a viable long term solution.

Given how much the Rangers pursued Barron in college, trying to pry him away from Cornell, he’s viewed highly in the organization. They also moved him back to center for a reason. In the event of a long term injury, Barron is the one who should be getting that 3C role, at least as a tryout. He has performed very well in Hartford, and is clearly their best player.

At some point, he will be the first of the Rangers call ups.

Fresh off his two goal performance yesterday, Lauri Pajuniemi has been heating up. He’s been a bit of a sleeper prospect, as he’s far from can’t miss but also nowhere near “bust” territory yet. Pajuniemi also fills a position of need at RW, as the Rangers have no depth there at all. Luckily for them, Julien Gauthier has been playing well. If that’s a flash in the pan, then they need some help.

Pajuniemi offers a wicked shot from the off-wing on the powerplay, something the Rangers do need on PP2. But right now there are questions about how the rest of his game rounds out at the NHL level. There’s a strong argument to keep him in the AHL, but if he keeps scoring, it will be hard to keep him down.

Zac Jones, who performed well in a limited sample last year, is the logical move for Rangers call ups if they decide they need a quick fix on defense. Jones and Nils Lundkvist are pretty similar in skill sets, so I understand the old-school thinking that you don’t want them on a pair together. Especially since they are both rookies.

That said, Jones is proving himself steady in the AHL, and showed he could hold his own at the NHL level last year. If Patrik Nemeth can’t figure it out, and Jarred Tinordi clearly isn’t the answer, then Jones is the next in line. Given how poor Nemeth and Tinordi have been, there isn’t much to lose here. The Rangers can’t continue to be successful with only two of three pairs working properly.

For some unknown reason, Chris Drury and Gerard Gallant seem to only want veterans. At RW, Drury has managed to fumble this so poorly that he’s now in rental territory. Imagine going into the offseason with multiple options at RW as a position of strength, and having them all blow up in his face. It’s comical, and while all of it isn’t his fault, he has his fair share of blame.

Defense was considered a good move, as Nemeth came with a history of strong defensive play. Tinordi aside, Nemeth was supposed to balance out the third pair. He hasn’t. I thought the Nemeth signing was good, so it would be contradictory to go back on that now. Sometimes, things don’t work out.

It seems the hunt on defense is for a 7D, not a 6D, which is why Jones is still on the outside looking in. Giving Nemeth more time is going to happen, and Jones getting more time in the AHL isn’t a bad thing. However the Rangers do need something at forward, and Barron is the clear move to make. For whatever reason (insert your own conspiracy theory here), that move isn’t coming.

The Rangers have the pieces that could work available to them. They have the cap and roster space. It’s not too early to say there are holes in the roster, and the sooner they evaluate which kids are part of the future, the more educated deadline decisions can be made.