On the Rangers veteran defenseman rumors 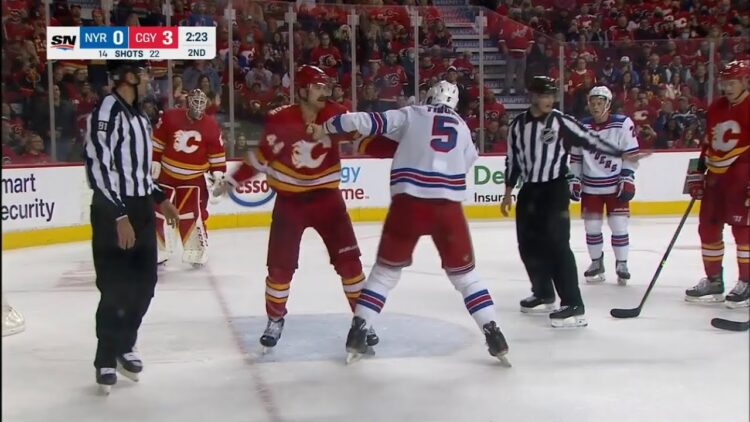 Per Arthur Staple (sub req’d), the Rangers veteran defenseman rumors have joined the Rangers search for a winger rumors. This is wild, as it accomplishes the rare feat of being both understandable and questionable at the same time. The Rangers, after all, not only have Patrik Nemeth on a multi-year contract, but have a slew of close-to-NHL-ready prospects in the AHL.

Patrik Nemeth has been bad

Patrik Nemeth has been struggling mightily. There are poor plays with the puck, defensive miscues, and overall concerns about his game. But the thing is, he didn’t just magically fall off a cliff. Something is missing from the story.

Perhaps it’s just not the right fit, and that happens. Or perhaps he just needs more time. We’ve been preaching Thanksgiving/Game 20 for the team to figure things out and develop proper process. But that also applies to the players. Especially the new ones. And double especially for the ones who came from a very good team, like Colorado, where it was far easier on them. Nemeth fits here.

It’s way too early to call the Nemeth contract a failure. He has too much of a solid history as a steady defenseman for it to fall apart so quickly. That said, the Nemeth contract is very moveable. The Rangers did something similar with Ales Kotalik, where it wasn’t working from Day 1 of the contract, and they moved him that trade deadline.

I still think Nemeth works out as a solid signing, but he’s been bad so far.

When the Rangers signed Jarred Tinordi to a two year deal, it baffled many. If there was an overreaction to the Tom Wilson thing, this was it. Tinordi, albeit better than Libor Hajek, is still not a viable option as a 7D. It’s something called out here, as the Rangers defense depth issues at the NHL level are still a concern.

Much like how Nemeth has been bad to start the year, there are few that would disagree with the conclusion that Tinordi isn’t the answer. Given the multi-year deal he was given, it makes you wonder why he was a target to begin with. But that’s a question for another day.

Why not use the prospects?

The Rangers have close to 50 defense prospects that are close to at NHL ready. Zac Jones already showed he can survive in the NHL last year, and he’s looking steady in the AHL. Braden Schneider was considered untouchable for Jack Eichel, so there’s clearly a path to the NHL for him too. Matthew Robertson isn’t untouchable, like Jones, and he still projects to be a bottom four contributor.

If the argument is about keeping Schneider and Robertson in the AHL to grow, that makes perfect sense. But why not Jones? Is that not a cheaper experiment than trading for a veteran defenseman?

It does seem that Drury and likely Gerard Gallant are both onboard with not having a pair of rookie defensemen as the third pair. Especially a pair that seems to have the same skill set in Jones-Nils Lundkvist. That can be easily fixed by shaking up the defense pairs, but given how the top four have looked, it makes sense to leave things the way they are. If it ain’t broke, don’t fix it.

Why the Rangers veteran defenseman rumors?

The question then becomes why the Rangers veteran defenseman rumors. It’s an odd one, since Nemeth was brought in for this exact reason. If the kids aren’t the answer, and Nemeth is still viewed as the answer, then the only logical conclusion than can be drawn is that the Rangers want something better in the 7D area. Tinordi and Hajek aren’t cutting it.

Finding a cheaper, better version than Tinordi won’t be difficult. A mid round pick is likely all that is needed, but it does make you wonder why they didn’t just sign someone better than Tinordi. Of all the questionable moves, the Rangers veteran defenseman rumors seem to confirm they missed on fixing the bottom part of the lineup.