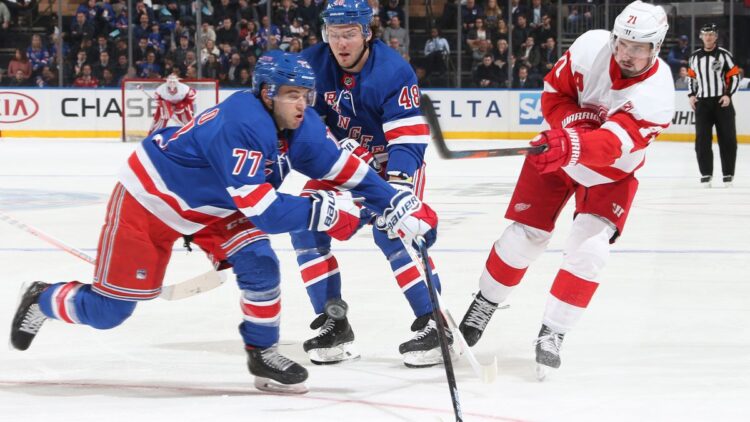 The Rangers are taking care of business. They are moving on to their RFAs, and yesterday re-signed both Alex Georgiev and Tony DeAngelo to two year deals. Both contracts were relatively expected given how the offseason played out around the league. As per usual, I have some thoughts. I’m going to try to keep this as unbiased as possible (at least I call myself out on it).

1. Starting with Georgiev, re-signing him was a foregone conclusion once the Rangers committed to buying out Henrik Lundqvist. Two years is about right and allows the Rangers to take their time to evaluate their goaltending future. Over the next two seasons, expect Georgiev to split time with Igor Shesterkin, with the Rangers eventually committing to one.

2. The dollar amount on the Georgiev contract is higher than I expected. I didn’t think he’d clear $1.5 million, but he got an AAV of $2.425 million. That’s a full $1 million more than expected while Georgiev had very little leverage. He’s only played 77 NHL games over 2.5 seasons. It’s not a cap killer by any stretch, just a bit more than expected.

3. Keep an eye on when this contract expires. Georgiev will be getting a qualifying offer of $2.65 million. Teams are watching how this plays out. A QO of $2.65 million for a guy who will likely be a backup on the Rangers is expensive. Something like that does limit any leverage the Rangers will have in a trade down the road. It’s unlikely Georgiev is with the Rangers long term.

4. The two year deal at $4.8 million for Tony DeAngelo is actually a good deal. DeAngelo has a lot of struggles in his own end, but he’s an elite offensive defenseman and puck mover. The contract is a fair deal for both sides. DeAngelo gets a pay day with a chance at another. The Rangers don’t have to commit to term and get a manageable deal. His QO when the contract is up will be $5.3 million, again something to watch.

5. As for those struggles in his own end, it will be interesting to see how DeAngelo does without having to drag around Marc Staal. He will also have Jacques Martin, who is actually a good defensive minded coach. That said, it’s still David Quinn’s system. Martin should be able to help with the mechanics, but it will be within Quinn’s system of giving up the blue line by design.

6. An added wrinkle will be how DeAngelo fares on the left side. Been calling for this for a year now, but I think moving there will really help out the Rangers and accentuate DeAngelo’s strengths. I had been previously calling for DeAngelo-Trouba pairing, but I’ve been convinced that DeAngelo-Fox is the better bet. DeAngelo will struggle with top pairing defensive assignments. Also Trouba excelled when he was with a defensive minded partner, of which DeAngelo is most certainly not.

7. It’s unlikely DeAngelo is with the Rangers long term. The Rangers have Trouba, Adam Fox, Ryan Lindgren, and DeAngelo as NHL players. Then the big prospects K’Andre Miller, Nils Lundkvist, Zac Jones, and Matthew Robertson. Plus you have the next tier of Yegor Rykov, Tarmo Reunanen, and Hunter Skinner. *PLUS* Braden Schneider. The Rangers are going to be a revolving door of young, cheap, and skilled defensemen. Not all of these guys will hit, but enough will that the Rangers will be looking to get them into the lineup as cheap ELCs that produce.

8. It looks like the Rangers had to choose between DeAngelo and Ryan Strome, and went with DeAngelo. That’s a very smart move by the Rangers.