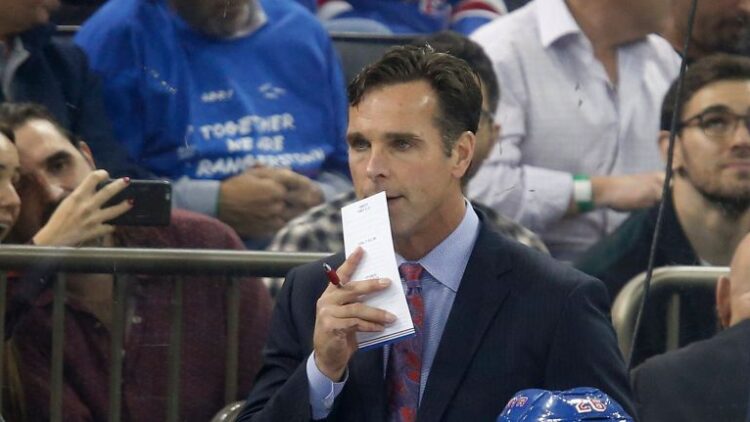 As we come to the end of the week off between games –right before we head into another week off– the Rangers didn’t disappoint, giving us a trade and a new fourth line to talk about. Beyond that, there is still some systems analysis to be had, and it isn’t pretty.

Boy I really dislike how Quinn and stuff have the defense giving up the blue line on zone entries. They back all the way up to the top of the circles. This is by design, been doing it since last year. #NYR #PlayLikeANewYorker pic.twitter.com/GUOuzs0PTt

Sticking to one example here not because I am cherry picking, but as you can see I’m short on resources and clips of zone entries against.

You’ll have to excuse the crude video taping of my TV, but this still gets the point across. One item that has been on the forefront of my game watching has been how the Rangers control the defensive blue line. Through the first two games this year, the defense has continually given up the blue line to opposing rushers, choosing to stand up and challenge at the top of the circle.

This isn’t cherry picking on one play, it’s by design. They did this last year too. The issue here is that when the Rangers continue to back up, thereby “playing it safe”, they allow skaters to gain the zone with speed. Since they are backing up through the neutral zone as well, this issue is compounded as there is nothing stopping the oncoming rush from reaching top speed and forcing defenders on their heels. This leads to more sustained pressure against, per Asmae Toumi and Michael Lopez.

*-The link to Asmae’s and Michael’s work is a great read. If you’re looking for a quick summary: Rushes that begin through the neutral zone with speed lead to more successful offensive zone shifts, as opposed to passing to a guy standing still at the blue line. Speed rules.

By giving up the blue line and allowing speed into the defensive zone, the Rangers were caved in defensively last year. They were one of the league’s worst at allowing shot attempts against. Now this is partly due to the personnel deployed last year, but we are beginning to see that happen again this year. Winnipeg crushed them from a shot attempt perspective at even strength. It was special teams that won that game.

The good news is that the right side of the blue line is going to be significantly better than last season. They have three guys that can skate. The bad news is that only Tony DeAngelo has experience in this system. Jacob Trouba is new to the team and Adam Fox is a rookie. Theoretically, all three should get better as the season goes on. This also assumes some kind of step forward for Brady Skjei and continued positive development for Libor Hajek. Marc Staal is a lost cause at this point.

No matter what the personnel is, they won’t be able to overcome a system that continually allows skilled players to enter the zone with speed. There is very little back checkers can do to prevent this kind of entry, but they can cover the third/fourth guy in for the chances across the slot line that tend to happen from this kind of rush. This is almost entirely on the defense not standing up at the blue line by design. That’s on both David Quinn and Lindy Ruff.

It’s no secret that we aren’t fans of Ruff defensive system around here. Nothing against the guy, who is probably a cool dude, but this type of defensive structure is going to cost the Rangers dearly. It may not matter now as they continue the rebuild, but at some point, their approach to defending the blue line is going to need to change.