Can Brendan Smith and Jacob Trouba be a top defensive pairing for the NY Rangers?

A major wild card for the NY Rangers heading into the playoffs is the Jacob Trouba/Brendan Smith defensive pairing. While the bottom-four pairs are known entities at this point, this pair was only put together for a handful of games before the season was paused. Last night was the first look we got in five months, and they did not disappoint. The NY Rangers are facing an uphill battle with their defensive pairs, as Carolina has a huge edge.

Context matters here. If Smith and Trouba are going to be relied upon to be a shutdown pair, then they need to go up against the top opposition and still produce results. It wasn’t a perfect situation last night with Libor Hajek was rotating in to get shifts. However when that duo was together, they were mostly going up against the Mat Barzal line. 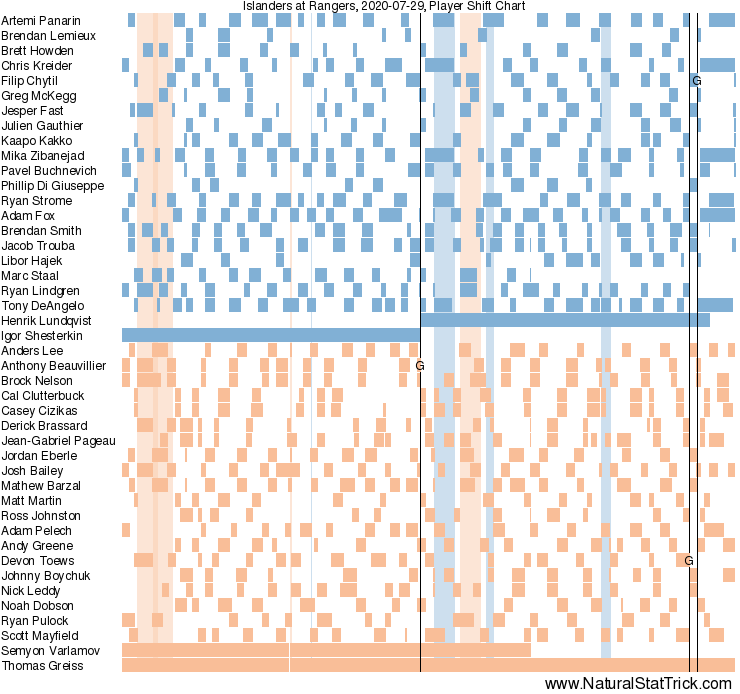 Again, grain of salt required. When the Smith/Trouba defensive pairing was on the ice, they were mostly up against the Mat Barzal line. It’s not always going to be a clear cut matchup, as special teams and changes on the fly usually mix things up. David Quinn was trying to get that pair out there as much as possible against the Isles top line, and he did so when he could.

What Does All This Mean?

It’s tough to make a conclusion out of one exhibition game. The Rangers had 7 defensemen to start the game, then lost one of them in the third period. However we safely assume that Quinn will be trying to use the Smith/Trouba pairing as his top defensive pairing in a shutdown role.

Going against Barzal and doing a pretty good job is step one in the process. Step two is showing this can be repeated against the Svechnikov-Aho-Teravainen line. That line is significantly more dangerous than the Barzal line. This is a tall order.

A major piece of the matchup against Carolina will be limiting that top line’s production. They won’t be contained, that’s virtually impossible. Limiting opportunities will be a critical success factor. Based on last night, it looks like this pair is up to the task.