Rangers/Hurricanes Matchup: Carolina with a big edge on defense

Following up to yesterday’s forwards matchup, the defense in this Rangers/Hurricanes series is going to play a big role in this series. These are two teams that have had months to study one another. Coaching will always matter, but skill and ability will drive effectiveness.

Rangers Defense – Strong on the Right, Bad on the Left 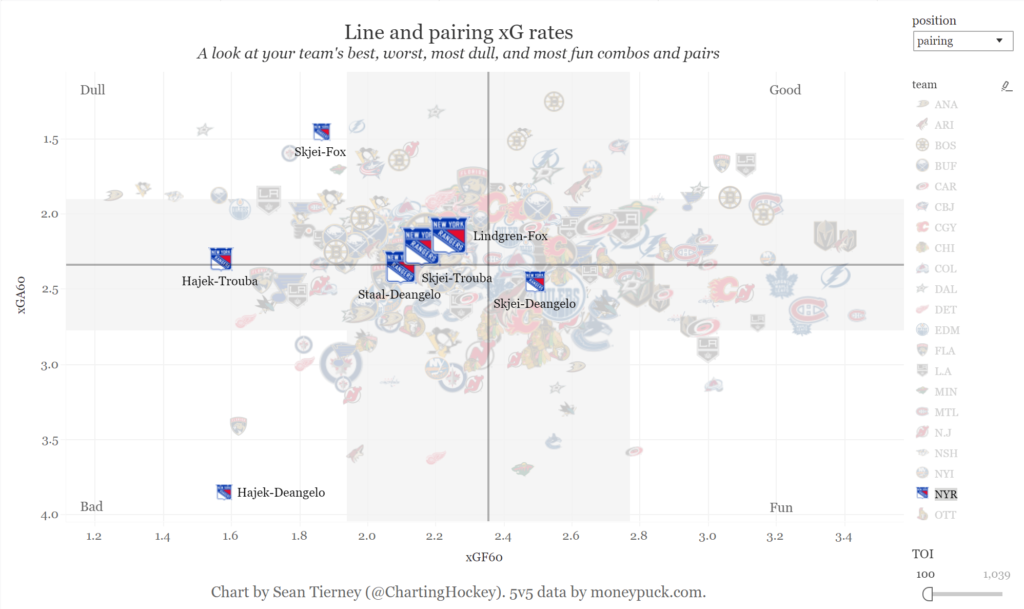 It doesn’t take rocket science to know that the Rangers are far better on the right side than on the left. When it comes to their pairings, Adam Fox carries Ryan Lindgren (although that isn’t as bad as you might think) and Tony DeAngelo drags around the corpse of Marc Staal. Interestingly enough, there’s a case to be made that Brendan Smith is the best LD on the roster, and he can hold his own on the top pair.

The right defense is where the skill is for the Rangers, but you are only as good as your weakest link. That left defense is just bad. The Canes will target that left side on dump and chase, knowing the puck is a grenade on their sticks. Once the Rangers give up the blue line, it will be about positional hockey.

The Canes – Injured Yet Still Great

The Hurricanes will be without Dougie Hamilton and Brett Pesce for this series. That likely doesn’t matter much. The Canes are still running a top-six of Jaccob Slavin, Jake Gardiner, Brady Skjei, Trevor van Riemsdyk, Sami Vatanen, and one of Haydn Fleury or Joel Edmundson. Each of these guys is better than at least half of the Rangers (mostly the left half), if not more.

The Canes’ blue line is one of the best in the league. And yes, missing Hamilton and Pesce is a big win for the Rangers, but that doesn’t make the Canes any less dangerous. Slavin works with whoever he gets paired with. The only “bad” pairing is Edmundson and TVR. The rest are at very worst “fun”.

The Rangers, when hot, excel at pressuring defensemen and forcing turnovers. The problem is that every defenseman on the Canes excels at moving the puck. Skjei might actually be the weakest link there, and he’s no slouch either.

Brendan Smith has the possibility to really balances out that top pair with Jacob Trouba. Smith has always held his own throughout the lineup, and on-ice ability to survive is key. We’ve seen that the bottom-four can do more than just hold their own. If Smith can balance out the top pair and keep himself and Trouba in the “dull” category, then the Rangers might be able to survive some of that top-end skill the Canes have.

The Canes have the edge at forward, and they have a huge edge at defense. The Rangers will need some of lady luck on their side in this one. Or just a goalie standing on his head.