On Henrik Lundqvist’s future with the Rangers 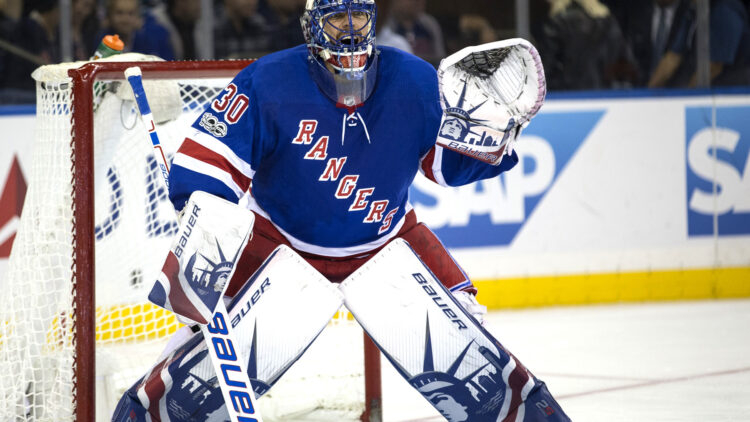 Following the trade deadline on Monday, John Davidson and Jeff Gorton held a press conference to discuss the day’s deals. It was natural that a question about Henrik Lundqvist popped up, and JD brushed it aside by saying everything that has been done has been discussed with Hank and with his full knowledge. There was no undercutting and no pressuring to push him out. “Several discussions” were had, and Hank has been the “ultimate professional.”

Lundqvist was later interviewed, and stated that his focus is on the rest of the season and he will be sitting down with JD, Gorton, and David Quinn after the season to discuss options and next steps. This obviously sounds a little ominous, and if you’re reading the tea leaves then it sounds like there may be a mutual parting of ways this offseason. But the details of that are not overly pretty.

A Lundqvist buyout has been discussed, and quite honestly it doesn’t really make sense. There isn’t much of a cap crunch next season, even less now with Brady Skjei’s contract off the books. If the Rangers were to go down this route, his cap hit next season would be $5.5 million ($3 million savings) and $1.5 million the following season, which is an increase in cap hit for the 2021-2022 season.

This option gives both parties a mutual separation while allowing Lundqvist to pursue other opportunities without restriction. It does give the Rangers a little extra flexibility, but adding cap space to the 2021-2022 season is not ideal.

This is a last resort option for the Rangers. The good news is that they can punt this decision to August, as they will likely have at least one player file for arbitration, opening the second buyout window.

Lundqvist would need to waive his no-move clause, which if they are discussing a buyout then this is probably a moot point. If the Rangers were retain 50% of Hank’s salary in a trade, they’d retain $4.25 million for next season and not deal with a cap hit for the 2021-2022 season. That’s obviously the ideal situation for both player and team.

However, that assumes a team is willing to take on Hank’s $4.25 million cap hit. Not many contenders can do that. Carolina is an option here, assuming they send James Reimer’s $3.4 million or Petr Mrazek’s $3.125 million back in a trade. Both of those contracts expire at the end of next season.

This kind of moves assumes a lot, and while it can be workable on paper, there are far too many variables. The biggest variable is what Hank would get on the open market on a one-year deal as a UFA. If it’s under the net cap increase for a team, then a trade doesn’t make sense.

Keep in mind that trading Hank nets the Rangers, at best, a mid-round pick.

Hank isn’t retiring, so this isn’t really an option. But there are no cap penalties for the Rangers if he retires.

This is the option I have been pushing because to me, it makes the most sense. Again if reading the tea leaves correctly, Igor Shesterkin is the goalie the Rangers want for the future. Georgiev is already a #1 starter on a team with three of them, and with Shesterkin the likely goalie of the future, the Rangers are going to look to trade Georgiev at some point.

Georgiev’s trade value is up in the air at the moment, and it’s probably a good thing that they didn’t trade him before the deadline. His best value is probably as a package deal with a forward who is getting squeezed out of the lineup (Ryan Strome?), much like Antti Raanta a few years ago. The difference is that Georigev is 24, not the 28 that Raanta was.

This is the concept that most are struggling with. Georgiev is the easy trade choice for me because no matter what, he’s on his way out. Be it this summer, next summer, or after his next bridge deal expires, he’s on his way out. But each season the Rangers keep him, he loses a year of cheap team control. Do not underestimate how valuable a cost controlled #1 goalie is.