The pros and cons of a Henrik Lundqvist buyout 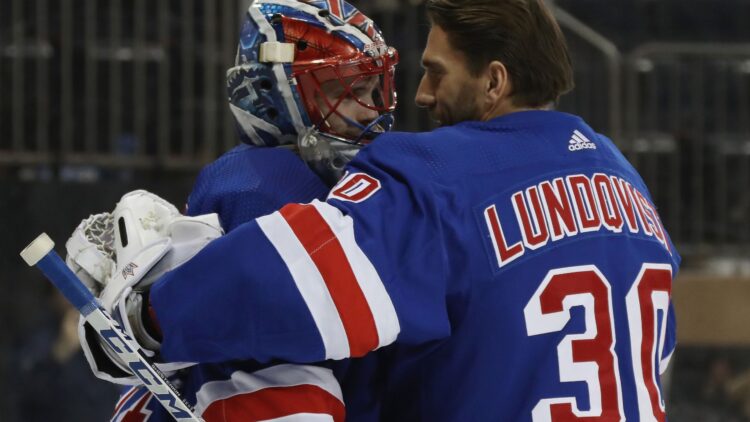 Even before the Rangers called up Igor Shesterkin and he put up great numbers, the potential for a Henrik Lundqvist buyout was always there. It was slim, and it was something no one outside of the staunch Hank-haters was prepared to talk about, but it was there. The future seemed pretty clear cut. Hank rides out his contract, the Rangers trade Alex Georgiev this offseason, and Igor Shesterkin gets eased into the starter role.

While it appears to be that Shesterkin’s KHL-out clause forced the Blueshirts into their three-man goalie rotation, it was not without merit, as we’ve seen. There was no justification in keeping Shesterkin in the AHL. He didn’t need it. Since his recall, rumors were abound that it would be Georgiev that would be traded. While that hasn’t come to pass yet, and likely won’t until the draft, other options are now being discussed.

That main option is something Larry Brooks wrote about, that Henrik Lundqvist may be headed towards a buyout. The reasoning is that while Shesterkin is likely the goalie of the future, the Rangers want to hold on to Alex Georgiev, probably to help cement his trade value and justify what the Rangers are asking from other clubs as cost in a trade. In keeping Georgiev and Shesterkin, the Rangers give themselves insurance in case one flops.

Which brings us to the cost of buying out Henrik Lundqvist, something that I still think is unlikely. Hank carries an $8.5 million cap hit for next season. A buyout is pretty simple – he would be $5.5 million on the books next season and then $1.5 million the season after. Pretty simple math, actually. As with any decision, there are pros and cons to this approach.

The cap space is the biggest advantage here. The Blueshirts find themselves in a precarious –but not dreadful– cap situation next season. They need to be careful how they navigate the cap, but it’s also not nearly as bad as everyone thinks. The extra $3 million will give them some breathing room, much like the Vlad Namestnikov trade this year gave them breathing room. It’s tight, but not “trade someone now” tight. More on that later this week.

Buying out Hank also gets rid of the three headed goalie monster while potentially building trade value for Georgiev, who is still the odd man out in this situation as long as Shesterkin continues to develop. David Quinn has mentioned it’s no longer about keeping guys fresh, for what it’s worth, so does that mean the hot hand plays? There’s no clarity. Buying out Hank, or getting rid of any goalie, gives clarity.

Buying out Hank, assuming it is a mutual parting of ways and not the Rangers forcing him out, gives him a chance to win a Cup. I think we all want that for him.

The biggest con I see here is that the Rangers would be kicking the Georgiev trade can down the road at most one season. You never know what happens between now and then, and the question becomes is the risk worth it? Can the Rangers maximize Georgiev’s value now? If so, then trade him now. The odds of the Rangers keeping Georgiev over Shesterkin are slim.

Another big con is how it is perceived by the fans. Unless it is a true mutual split, then the Rangers will have bought out the face of their franchise for the past 15 years with nothing but bad blood to show for it. Buyouts are rarely mutual, as we saw with Dan Girardi and Kevin Shattenkirk, and to a lesser extent Brad Richards. This could be worrying just for the sake of worrying, but the risk is still there.

In our interview with Vince Mercogliano, he mentioned that this is Henrik Lundqvist’s locker room and he is the guy they all look up to. Chris Kreider and Jesper Fast, two other leaders, appear to be on their way out as well. Do you want the only holdovers from a leadership group to be Mika Zibanejad and Marc Staal?

Got my seasons mixed up.

I’m not in the camp of buying out Lundqvist unless there is a mutual parting of ways. There is a lot of value in packaging Georgiev at the draft to maximize value, while having Shesterkin take the starter reigns and have him learn from Lundqvist and Benoit Allaire. That said, there is no room for emotion in player decisions, so it has to be about how to move the Rangers forward properly. This is not an easy decision, and I certainly do not envy Jeff Gorton or John Davidson right now.