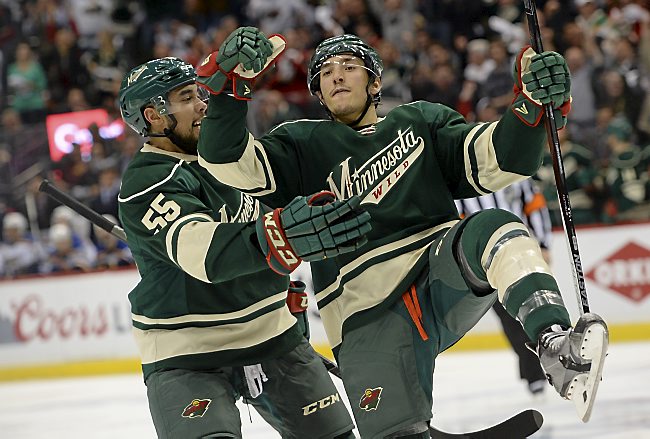 As the expansion draft nears, we are going to begin hearing rumors of trades with Vegas to protect players and/or bribe Vegas into taking a contract. We’ve seen one such rumor publicized already, and it’s likely we will see more. But we will also begin seeing trades made by clubs who are in a bad position with protected players. Anaheim is one such team, covered already last week. Another team in a precarious situation: Minnesota.

Minnesota is a little stuck right now with no-move clauses. Zach Parise, Mikko Koivu, and Jason Pominville all have no moves up front, with Ryan Suter having a no move on the back end. If you assume that the Wild will go the 7-3-1 route, then they have a serious problem.

The forwards are less of a concern than the blue line, as the Wild have five defensemen they’d ideally like to protect. Suter is definitely getting protected (NMC). After that it’s two of Jared Spurgeon, Jonas Brodin, Marco Scandella, and Matt Dumba. That’s not exactly Anaheim levels of concern, but it’s up there.

Of that list, the Rangers would only really benefit from Spurgeon or Dumba. Brodin and Scandella are hard no’s from me. Brodin is just a mildly better version of Nick Holden, and Scandella is on par with them just without the scoring. Neither would be a significant upgrade for the Rangers.

But when it comes to Spurgeon and Dumba, now we are talking. Spurgeon is a top pairing defender on a solid contract, which leads me to believe Minnesota will be protecting him. Dumba, on the other hand, is not exempt from the expansion draft. At 22 years old and putting up 11-23-34 last year, his stock is on the rise as well. He’s not on the Spurgeon level, but he could get there soon.

Now all this suggests that the Wild would be smart to protect both Spurgeon and Dumba and expose Brodin/Scandella. It’s a tough pill to swallow for them, to lose perceived good defensemen for nothing, but it’s the cost of doing business in an expansion draft. But if a team comes in offering a good hockey deal for one of these four defensemen, Minnesota likely needs to think long and hard.

All this said, I personally don’t think the Rangers and Wild match up very well when it comes to trades. The Wild are going to need expansion draft exempt players, something the Rangers simply can’t offer. Futures might be a good deal, but Minnesota is a win-now team, so it’s tough to say if they’d take such a deal. Minnesota is certainly another team to keep tabs on in June, though. As I love to say, prepare for carnage.