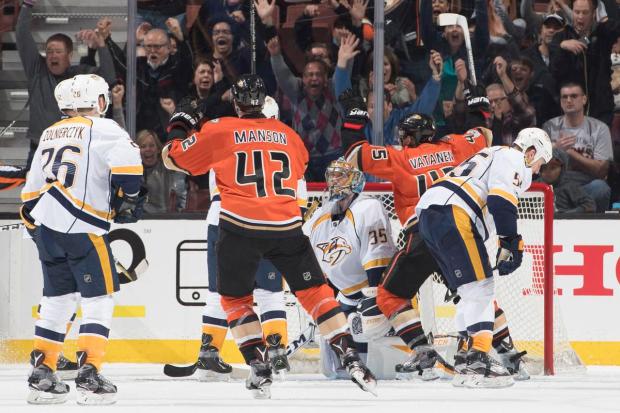 Update: The injuries to Vatanen/Lindholm have minimal impact on the expansion draft. They will still need to be protected by Anaheim, and Vegas would still jump at the opportunity to get either of them. It may impact Vatanen’s trade value. albeit minimally because he is only 25.

The biggest task of the offseason for Jeff Gorton is to retool the Rangers’ blue line. While we’ve covered the futures of Dan Girardi and Marc Staal extensively, there is still a giant hold at 1RD. It’s a position Girardi has filled for the past decade, but simply cannot do so going forward. While Kevin Shattenkirk is certainly intriguing, the price tag may make him unrealistic. In that regard, Gorton must turn to the trade market.

Identifying trade partners takes an unusual twist this summer, as teams are going to look to make trades to position themselves favorably for the expansion draft. For some teams, that may mean trading a defenseman that may be lost during the draft. That is exactly the case in Anaheim.

The Ducks are in an odd scenario. They have six forwards (Kesler, Getzlaf, Perry, Rakell, Silfverberg, Cogliano) they’d like to protect, but also have five defensemen (Bieksa – NMC, Vatanen, Fowler, Lindholm Manson) they’d like to protect. Even if they get Bieksa to waive his NMC, that leaves them one over the limit. Without a trade, they will lose one of Vatanen, Manson, or Fowler for free. Allowing that would be bad management.

Luckily for the Ducks, they have one extra forward spot to use for protection. They are in a unique position where they can deal an asset from the blue line for a forward and not lose anyone of significance to the expansion draft. And luckily for the Rangers, they have a plethora of forwards that would intrigue Anaheim.

Disclaimer: I’m aware that the Ducks could simply just have Bieksa waive his NMC to protect Vatanen, and then trade a pick to Vegas to ensure they don’t take Manson. That’s a real option that can’t be ignored. There’s also room with the Ducks for a potential blockbuster involving more players, but let’s keep things simple.

Anaheim is really shallow up front, with a solid top-six but not much scoring depth beyond that. The Rangers have someone like Kevin Hayes or JT Miller who would certainly be enough to land either Vatanen or Manson. Acquiring either pushes Andrew Cogliano and Antoine Vermette down to the third line where they likely belong. And naturally we see the benefit for the Rangers.

Either Vatanen or Manson is a win here, and let’s remember they are both 25 years old. Manson is certainly cheaper, while Vatanen carries another three years at a $4.875 million cap hit. Manson is also bigger than Vatanen, but Vatanen is significantly better offensively and can be a nice right-handed presence on the powerplay. There’s no wrong answer with either defenseman, and both likely cost the same in a trade.

This is a potential deal that would need to be struck before the expansion draft and before the buyout period, as the Rangers would need to buyout and/or trade one of Girardi and Staal –or ask them to waive their NMCs– to ensure they can protect Vatanen or Manson. Either way you slice it, the Ducks and Rangers match up well for a pre-expansion draft trade.