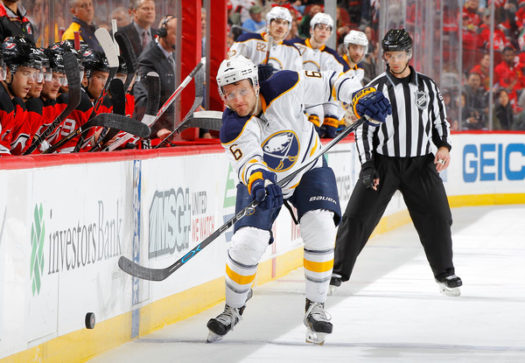 Note: No goal breakdown from last night. Sorry about that.

Today marks one month until the trade deadline and buzz continues to build that the Rangers are seeking help for the right side of their defense. TSN’s Bob McKenzie reported that the Blueshirts don’t want to part with any of their young forwards in a swap – but they are expected to look for cheaper solutions.

We’ve already discussed Michael Stone and Ryan Murphy, so today we’re taking a look at Cody Franson. Two years ago, Franson was one of the hot commodities at the deadline and he was shipped from Toronto to Nashville with Mike Santorelli in exchange for Olli Jokinen, Brendan Lipsic and a first-round pick.

Franson, 29, flamed out in Nashville and signed with Buffalo that summer, where he’s been ever since. Franson missed the final 23 games of last season with a concussion and hasn’t been quite the same player.

But he’s displayed signs of life lately with four points in four games heading into the All-Star break. Franson is a UFA to be and not part of the Sabres’ future plans, so he’s a very realistic trade target.

He has experience running the power play and still has intriguing #fancystats that suggest he might be a useful acquisition.

For some more background on Franson, I sent a few questions to Andy Boron of Die by the Blade:

Q: Franson had a tough season last year cut short by a concussion. How has he recovered from that and is his level of play back to where it was pre-injury?

A: Last season Franson went from a possibly-exciting acquisition to a disappointment really quickly. It was clear that the game, both speed and confidence-wise, was passing him by. Yes, he put up 17 points in 59 games, but it seemed like they were offset more often than not by a defensive blunder in his own end. However, this year I think Franson has turned things around in a small way. His defensive miscues have been fewer, and he’s currently one of a small handful of players who actually have a positive +/- this season. Or maybe this is just Stockholm Syndrome settling in with how bad the Sabres defensemen (minus Ristolainen and McCabe) have been overall. The thing that hasn’t come back for Franson is the offensive production. He can still make a solid outlet pass, but the guy who just a few years ago was racking up points on the power play has not resurfaced.

Q: He was once known as a PPQB but Franson has just one goal on the man advantage this season and has seen his ice time cut. Is he still useful there?

A: The issue with the Sabres generally decent power play is that they have one All-Star squad with all of their best players, and a B-squad of whoever else happens to be around. Franson has played almost exclusively on the B-squad, so it’s hard to say whether he can effectively quarterback a true #2 power play unit. He is still a good passer, and if there’s any place he’ll put up points it’s on a strong power play – but I’m not sure he’ll ever approach his Toronto numbers again.

Q: Franson seems to have plenty of critics, but his underlying statistics still look pretty good – what’s your take?

A: I think as a No. 5 or 6 defenseman on a good team he’s…fine. The problem is he has to play protected minutes in order to maximize the return and not every team can afford to do that. For perspective – he’s been a 5/6 defenseman most of the year on the Sabres, who regularly dress four players that I would consider 5/6 defensemen. To not be able to rise significantly above players like Justin Falk or Taylor Fedun is slightly concerning. Funny story: I’m actually typing this while watching the Sabres play in Nashville and Franson literally just took a holding penalty to prevent a guy from skating by him.

Q: What are Franson’s strengths and weaknesses? How would you describe his career arc right now?

A: Strengths: Good, calm passer, uses his body effectively against the boards, can get his shot through from the point, good puck control and vision in his own end.

Weaknesses: Franson is slooooooooowwwwww, and while skating backwards he looks like he’s stuck in a tar pit. Doesn’t always use his size to his advantage, and suffers from the occasional defensive brainfart – though who among us doesn’t?

Q: Are you of the opinion that Buffalo will look to deal Franson? If so, what would you expect for a return?

A: I think the Sabres will ultimately be sellers, and I don’t see them wanting to retain Franson, so I say get whatever you can for him. Got any third-round picks burning a hole in your pocket?

—
Big thanks to Andy for the help with this post – be sure to check out his site!