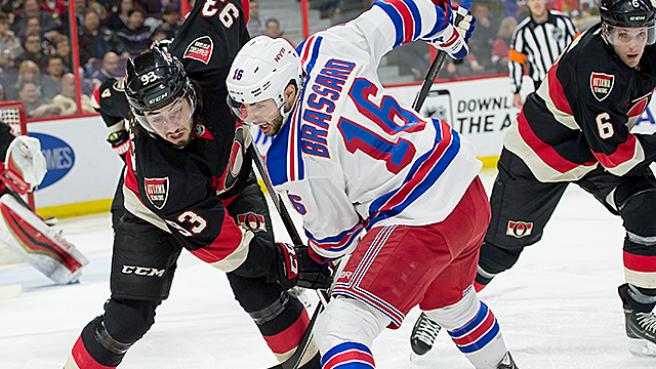 The Rangers made their first, and possibly only, big move yesterday, shipping Derick Brassard and a 2018 7th round pick to Ottawa for Mika Zibanejad and a 2018 2nd round pick. The move saves the Rangers $2.35 million in cap space while getting arguably equal –with the distinct possibility of it evolving into better– production while also getting younger. They also nabbed a second round pick as well. All in all, it was a solid trade for Jeff Gorton, adding to his already solid offseason. Here are my thoughts on the trade.

1 – First things first, it stinks to see Brassard go. But if any of the centers were to go, he was the only logical choice. Brass was the best trade chip for the Rangers, as Gorton cashed in on what is likely a depreciating asset. It was highly unlikely he was going to score 27 goals again next year, as he needed a whopping 15% shooting percentage to get to that. It was the first and only time Brass had ever cracked 20 goals, and at 29 years old when the season starts, he’s already peaked. Zibanejad already has a pair of 20-goal seasons at just 23 years old. Both Brassard and Zibanejad will put up 50 points next year. I’ll take the cap savings any day.

2 – While the above three points are critical, don’t sleep on the fact that Zibanejad is a right handed shot. The Rangers have been lacking a right-handed trigger man on the powerplay forever now, and it’s something they’ve needed to address. Derek Stepan wasn’t getting the job done, as he was too deliberate with the puck. Zibanejad set up for the Sens as this trigger man. I’d expect him to give the Rangers more of a threat from that side of the ice, perhaps opening things up for players like Rick Nash and Mats Zuccarello. He’s also a 50% faceoff guy, so there’s that.

3 – The elephant in the room is still the defense, and I will get to that in a moment. But let’s take a step back and appreciate the type of trade this. The Rangers recognized that change needs to happen. They recognized that they may not be able to address the blue line this offseason (again, more on that in a bit). So they made a trade to get younger and cheaper without sacrificing skill level. Plus they got a high pick out of it. Most seem to agree that next year is likely not a year of realistic contention for a Cup, so this move loads up for 2017-2018, while keeping an eye on 2016-2017.

4 – Make no mistake, the Rangers will not be significantly improved unless they make major changes to the blue line. Kevin Shattenkirk is a start, but only if it comes at the expense of one of Dan Girardi or Marc Staal. If no trades can be made, then they both need to see fewer minutes. It’s not for lack of effort on Gorton’s part, he’s certainly trying based on the news that’s leaked. But if there is no trade market, there is no trade market. It was a poor hand to be dealt, but Gorton is doing a masterful job of filling other needs and not letting this make or break his offseason.

5 – I have a feeling Eugene Melnyk was behind this trade. The Sens waited until after July 1 to make the trade so that they didn’t have to pay Brassard’s $2 million signing bonus. That makes his actual salary out of Melnyk’s pocket $3 million, as opposed to the $3.25 million owed to Zibanejad. After this season Zibanejad is going to get relatively expensive, potentially up to Stepan money if he has a monster season. Brassard, on the other hand, is due just $3.5 million for each of the next two seasons. That’s a lot of money saved for a team that doesn’t spend to the cap. Aside from real dollars, I honestly have no idea why the Sens would make this kind of trade.

6 – My initial thought on lines is that Zibanejad gets first crack with Nash and Zuccarello. The Chris Kreider, Derek Stepan, J.T. Miller trio had some good chemistry, and my guess is that Alain Vigneault will keep them together for a little bit before switching things up. It wouldn’t shock me to see Stepan and Zibanejad flip flopped, but I think those six players make your top-six. That cements Kevin Hayes as your 3C, likely with Pavel Buchnevich and Jesper Fast as his wings. The fourth line will be Michael Grabner, and some mix of Josh Jooris, Oscar Lindberg, Nathan Gerbe, and Tanner Glass. I really think Glass is on the outside looking in with some of the depth signings, but I won’t buy that until he’s not in the lineup.

7 – If you want some Brass memories, here’s his gif archive. So long Brass, we will miss you and those lovely goal celebrations and awkward fights.