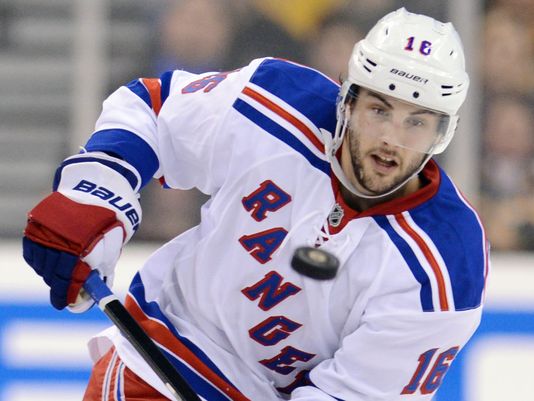 Ever since the ball dropped that the Rangers are fielding offers on everyone not named Brady Skjei, Pavel Buchnevich, or Henrik Lundqvist, the focus has been on trading names like Rick Nash, Derek Stepan, and Ryan McDonagh (Marc Staal/Dan Girardi notwithstanding). But when it comes to Stepan, very few bring up Derick Brassard, who may actually be the best chip for the Rangers.

When comparing Stepan to Brassard, most Rangers fans think this is either a toss up or lean Brassard. It’s a valid argument, as Brassard is putting up comparable offensive numbers to Stepan and is on a cheaper deal. With the Rangers crunched for cap space, trading Stepan seems like the way to lean if they decide to trade one of their top two centers.

But is that truly the smartest approach?

Brassard is signed to a very friendly deal, with three seasons left at a $5 million cap hit. Stepan, on the other hand, it signed for the next five seasons at a $6.5 million cap hit. For comparable stats, it seems to lean Brassard. However, Stepan is three years younger than Brassard at just 25 (26 when next season starts) years old. Brassard is 28 years old, 29 when next season starts. An argument can be made that Brassard has peaked, especially shooting at 15% last year, while Stepan has more years left in his peak years.

While many laud Stepan for his two-way game and ability to kill penalties, Brassard is not known for his penalty killing or defensive game, making him more of a one-way player. When looking at trading Stepan, the Rangers would also need to find a way to replace him on the penalty kill. As for Brassard, those who are more statistically inclined notice that Kevin Hayes could replace that production if given more minutes, Brassard’s linemates, and time on the powerplay.

The Rangers are actually blessed with center depth, something the league is very short on. I covered this last week, but here’s Stepan’s peripheral stats: 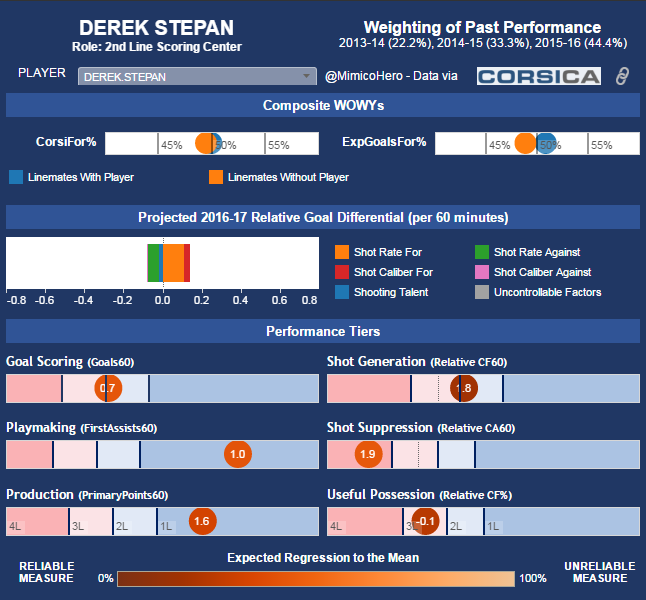 Without beating a dead horse, it’s clear Stepan is a 1C. But this isn’t about Stepan, this is about Brassard. When you look at his peripherals, you see that he doesn’t compare favorably to Stepan. 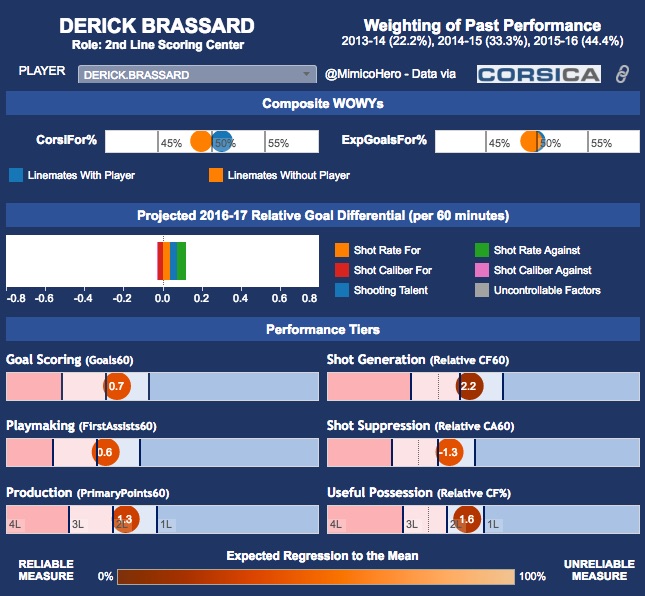 Stepan makes his teammates better and drives more offense than Brassard. This isn’t to say Brassard is bad. He’s not. Not by a long shot. But in terms of more predictable production and making teammates better, Stepan has the edge. Couple that with the three year age gap, and all of a sudden Brassard looks like he could be the best trade chip. His value is at an all-time high, and he could theoretically require the same haul that Stepan would.

And isn’t that the whole point? To make the team better. If they can keep the better, younger, and more versatile of the two centers while still getting a comparable haul in a trade, isn’t that the route to take?

Return aside, part of this is seeing if Kevin Hayes, who seems to be in the dog house with the fans and coach, can be a viable replacement for Brassard. Hayes gets a lot of heat for no real reason other than “effort.” And yes, he had some gaffes and seems to be a bit doofy. But that doesn’t mean he’s not a good hockey player. Are fans really willing to give up on a 24 year old center, one year after anointing him the future of the club? It seems silly, especially when you look at his numbers. 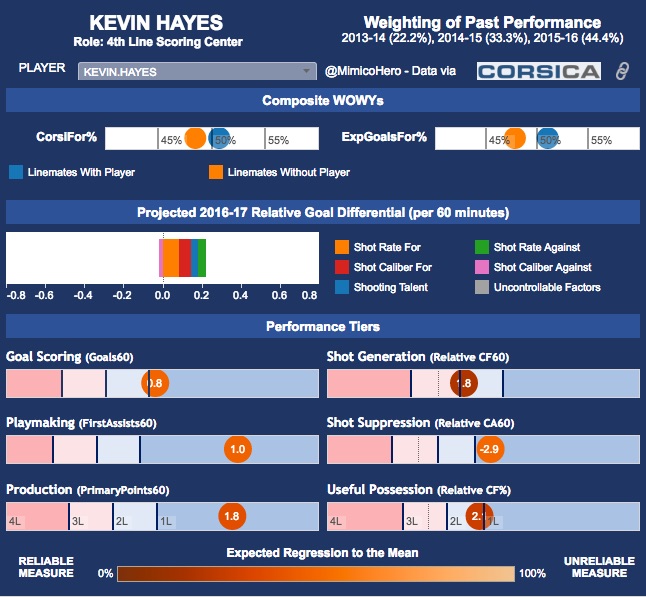 I have to admit, even I was surprised by how good these numbers look. They look even better than Stepan’s. Of course, we need to factor in linemates, competition faced, and zone starts to this, but we aren’t looking to compare Hayes to Stepan, are we? To make it even clearer, let’s look at Hayes and Brassard, side by side. 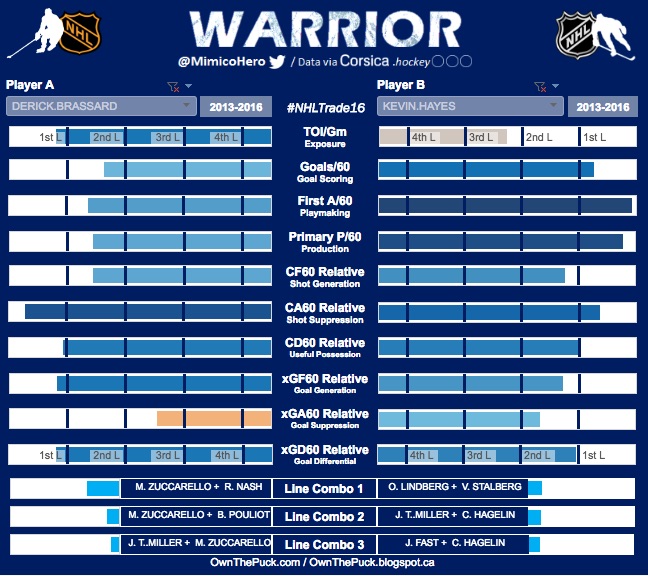 The key thing to note here is that we are seeing if Hayes can replace Brassard’s production in the same role. That role being offensive zone starts as a 2C. Looks like he can, doesn’t it? Hayes outproduces Brassard in every aspect of this chart with lesser linemates. Based on this, Hayes should theoretically be able to handle Brassard’s role and produce similar, if not better, results.

It’s also worth nothing that for all the issues folks have with Hayes and his backchecking, Brassard is the same way. You get some good backchecks, some bad ones, and mostly in between. When looking at the role you’d be asking Hayes to play –and that is a critical aspect of this discussion, the role on the team– it looks like he can take Brassard’s minutes and be just as productive. It certainly helps that Hayes is coming off his ELC, and will be pretty cheap and cost controlled.

So to sum this up, you have two comparable centers in Stepan and Brassard. Both are solid, but one is older, less versatile, and can seemingly be replaced by someone on the team who is significantly cheaper. It’s a tough sell for a lot of people that Hayes can be productive in that role, but his ineffectiveness is widely overblown.

The Rangers are in trouble with the cap, and need to make some savvy moves to stay competitive while retooling on the fly. What better way than to maximize return on Brassard while keeping two centers who are three and five years younger? Tough calls need to be made sometimes, but if the Rangers are looking to deal a center, Brassard is their best chip.