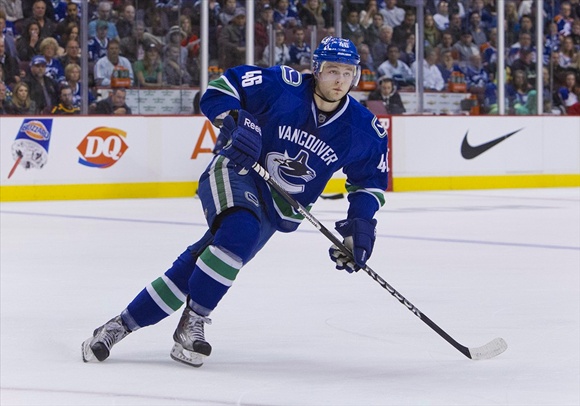 In case you missed it, the Rangers and Canucks swapped Emerson Etem for Nicklas Jensen yesterday. While most saw an Etem trade coming at some point, the fact that it came together yesterday was a bit of a surprise. The Rangers announced there was a transaction with Etem after he was not at practice and while many speculated a trade, Etem was sent on a conditioning assignment. The trade didn’t break until later in the afternoon. And here we are, with Jensen and a 2017 sixth round pick.

1. The trade marked the end of the unspectacular Rangers career of Etem, who played in just 19 games after being acquired for Carl Hagelin. Jensen, who was also a late first round pick a year later, has yet to make an impact at the NHL level. Jensen needed a change of scenery, and Etem needed playing time that he wasn’t getting in New York. This was a classic trade of assets that needed to move on from their current clubs. Nothing less, nothing more. For the Canucks, they get a potential middle-six forward with great tools that hasn’t put it all together.

2. In Jensen, the Rangers get a first round talent that also hasn’t put it all together yet. The 6’2″, 190-lb right-winger (left-handed shot) has spent the last two seasons in the AHL at about a half-point-per-game pace. He’s not a goal scorer, but his assists per game have gone up. His claim to fame is that he’s the best hockey product Denmark has ever produced. Not sure if that’s a good thing, though. The Rangers also clear Etem’s $850,500 cap hit, which is not a minor detail.

3. Jensen will be in the AHL for a while, and may serve as the next injury call up if needed. I wouldn’t expect too much out of him. He’s a bit of a reclamation project at this point. For now, the Hagelin trade depends on how Ryan Gropp develops. It was a cap dump to begin with, but it makes you wonder what else was out there for Glen Sather before he made this deal. Perhaps the Rangers weren’t banking on Etem at all, and just wanted Gropp. We won’t really know for sure.

4. I don’t think Etem ever got a fair shake in New York. He very rarely played, and when he did he was mostly on the fourth line. He had flashes of solid play, but was very inconsistent with some very glaring turnovers. That said, he had relatively decent possession numbers, coming in at -0.08 CF rel (47.01 CF%). Jesper Fast, Viktor Stalberg, Tanner Glass, and Dominic Moore all have worse possession numbers, both raw and relative. Etem was also victimized by a team worst 96.7 PDO, which comes from a team worst 7.14 on-ice SH% (team’s SH% with him on the ice) and .895 on-ice SV%. Basically, the team didn’t shoot well (expected, considering his linemates) and got poor goaltending (not expected, considering some of his linemates) while he was on the ice.

5. People may point to his on-ice SV% at .895 and say that he was a defensive liability. He’s no defensive stud, that’s for sure, but one of his primary linemates –Moore– had a .940 on-ice SV%. Sometimes it’s just luck. I expect that goaltending number to even out over the course of the season. Personally, I think a little more patience would have been nice. The Rangers, however, don’t have that luxury. They are a win-now team and don’t have time for growing pains. We are also seeing this with Dylan McIlrath.

6. Trying to preempt some of the “Now I won’t have to hear about him anymore” comments, it’s worth noting that the main reason why most wanted to see him play wasn’t so much about Etem himself, but about the process. There were players on the roster that were getting playing time, despite playing worse than Etem. If the goal is to play the best team, then the process was broken. It wouldn’t matter if it were Etem, Jensen, or any other young player. The process has been broken for a while this season. That was the major issue, not so much benching Etem.

It only took six months for the Rangers to move on from Etem. At the time of the trade, it looked like Etem was their target. Perhaps the thinking should shift to Gropp being the target, and Etem being a throw-in. It is what it is at this point, it was a disappointing 19 games for Etem. Let’s see what Jensen can do, if he makes it to the NHL on a regular basis.