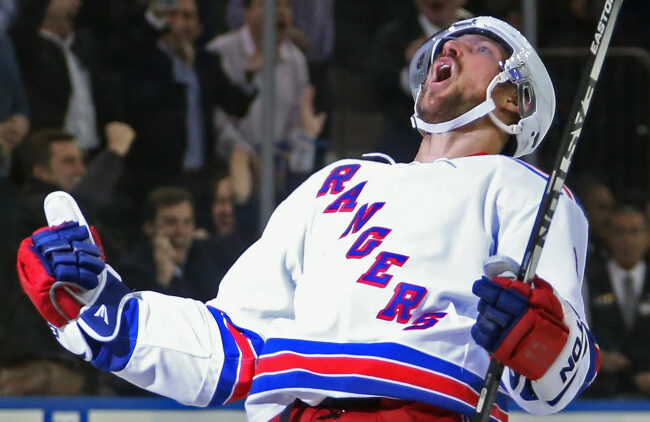 Where has this Kevin Klein gone? Photo by Bruce Bennett/Getty Images

With the All-Star Game coming up this weekend, we’ve been handing out our annual midseason grades. Dave tackled the goaltending and coaches, Chris wrote about the top-six forwards, and today I’ll be reviewing the defense.

Boyle’s season got off to a slow start after the 38-year-old D-man missed the first five weeks of the year with a broken wrist. But in my eyes, he was brought here to do one thing – fix the power play – and that’s been a resounding success. Does Boyle deserve all the credit? Definitely not. But he has made a major impact moving the puck quickly and decisively on the man advantage, and he’s been better in his own end than I expected. Boyle has been deployed in the offensive zone whenever possible, but he’s made that positioning count by helping the team direct rubber at the opposing net at a terrific rate.

The decision to let Anton Stralman go in favor of Boyle may haunt the Rangers for years, but for the short term, I’m pretty comfortable with the tradeoff.

It’s amazing what a little added offense does for public perception. The 30-year-old has doubled his previous career high with eight goals already this year, and suddenly he’s being mentioned as having the best contract in hockey. Klein was never much of an offensive dynamo before this season, but he was a very dependable top-four blueliner on a strong defensive team in Nashville for several years. Clearly he fell out of favor a bit, but it’s a bit ironic that the Predators thought they could trade a stay at home blueliner in Klein for an offensive injection in Michael Del Zotto.

Klein’s booming slap shot has been a welcome addition, and he’s been perhaps the team’s most consistent blueliner in his own end. He’s also become a leader in the locker room and shown the willingness to stand up for his teammates. Klein has been nearly as good as Boyle at tilting the ice, and he’s doing it without the benefit of primarily offensive zone starts. He has been everything the Rangers could have hoped for, and more.

Whether you place more blame on McDonagh’s early-season shoulder injury, or on the added pressure of being captain, the 25-year-old hasn’t quite been himself this year. His game is slowly rounding into form, but McDonagh simply hasn’t been the dominant force night in and night out that he was last season.

He’s still obviously the club’s most talented blueliner, but the gap between his level of play and everyone else’s isn’t nearly as significant as it was last year. Of course possession wise it’s more difficult for McDonagh to stand out since he plays against the opposing team’s top line every night, but his numbers have taken a major dip from last year across the board. It will be very interesting to see how McDonagh responds in the second half.

The massive contract extension aside, Staal has actually had a nice season after a tough start. We all know he provides next to nothing offensively and isn’t great at moving the puck out of the defensive zone, but Staal remains extremely strong positionally and is an expert stickchecker.

Staal will never play a flashy game, but he is one of the better shutdown defenders in the game. The long-term financial commitment might not be ideal, but for the present, Staal is nearly irreplaceable.

It seems like the swell of Girardi haters grows with every game, and many would have you believe he belongs in the American League, but the flaws in Girardi’s game were largely ignored until he inked an enormous new deal last spring. Yes, Girardi has an annoying tendency to snow angel against the rush, and yes, there’s been a noticeable dropoff in his game since early June, but he’s still an adequate top-four blueliner. In fact, if you agree that McDonagh hasn’t been himself, then Girardi deserves some credit for helping the duo maintain its status as the team’s top pair.

Girardi’s metrics are pretty ugly and you can’t help but worry about how much more he’s going to slip over the next few years, but he’s also facing the toughest competition every game. Why he’s still getting power play time is one of life’s greatest mysteries though.

The coaching staff has lost all faith in Moore at this point, and it’s hard to blame them. Moore possesses top-end speed and has plenty of talent, but he continues to make frustrating mistake after frustrating mistake. His possession metrics actually aren’t bad, but it’s the head-scratching plays that have held Moore back throughout his career. That he’s rotating in and out of the lineup with a journeyman says less about Matt Hunwick than it does about Moore’s present and future in New York.

Moore is still a fine sixth- or seventh-defenseman to have, but hope for him to turn into anything more than that is all but gone. He’ll have to really come on in the second half to warrant a new deal with the team.

Year after year Glen Sather attempts to find an extra defenseman on the scrap heap, and there have been mixed results. But this year, Sather hit a home run. Hunwick has been a great fit thanks to his speed – which, not coincidentally, is Moore’s greatest strength. But unlike Moore, Hunwick is consistent and has established what he is as a pro. Hunwick isn’t the most talented guy, but he picks the right time to jump into the rush and has proven to be adequate in his own zone as well.

Hunwick is what he is at this point, so Alain Vigneault won’t hesitate to shuffle him back and forth from the press box, but when Hunwick plays you know what you’re going to get. It’s very reassuring to know that if a blueliner goes down with injury, there’s an extra guy that’s capable of stepping in.

Let us know how you’d grade the D-men in the comments.