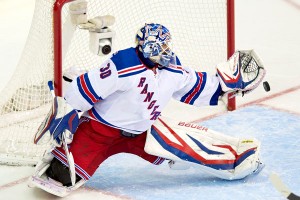 It’s not exactly the midpoint of the season, but now is as good a time as any to begin our midseason grades. It also helps that I had writer’s block and no idea what else to write about, so this won. I’ll be covering the goalies and coaching this year, and I’ll be grading the coaching staff at the group level. I won’t be breaking it down into each assistant coach.

Hank had another very slow start to the year, allowing three or more goals in 11 of the first 20 games of the season. His numbers remained respectable due to four shutouts in that span, but it was the second season in a row where people wondered if Hank was starting to decline. Of course Hank turned it on in the next 12 games, allowing three or more in just two games.

Hank’s successes under AV tend to ride with the team hitting its stride in the middle of the season. AV is a coach known for his slow starts, and Hank isn’t immune to that. The defense was very suspect in front of him during those first 20 games, and has been much more consistent and solid since. Hank shares some of the blame in that of course, but without him this team is a bottom feeder.

I fully expect the Hank we’ve seen over the past month to be the Hank we see for the rest of the season.

Talbot has been solid this season, appearing in ten games and starting in eight. He –like Hank– was shaky in the early going, allowing four, three, and five goals in his first three starts of the year, respectively. After that he posted back-to-back shutouts, and sandwiched a third shutout in between a pair of three goal performances. Every night he’s in net, he gives the Rangers a chance to win the game, and that’s his job. There aren’t many backups that do the job better, and I think it’s safe to say he’s one of the top-ten, if not top-five, backups in the league.

We expected Talbot to regress from his .940 SV% last year, and I certainly expect him and Hank to basically swap save percentages by the time the season ends. If a backup has a SV% above .915, it’s solid. Above .920, and it’s great.

Last year the Rangers had to deal with a brand new coaching staff that brought in a much more aggressive defensive zone system and a more creative offensive style. It took the Rangers until January to figure it all out.

This year the club had to deal with massive roster turnover at the forward position, injuries throughout the lineup, and a severe lack of depth at center. AV tinkered and tinkered, seeing what he had in the kids, seeing what he had in the vets, and seeing who can fill in at center until Derek Stepan healed. It was certainly a bumpy road, but things started to settle once Stepan returned and Dan Boyle’s hand started to be an afterthought.

It wasn’t all pretty for the coaching staff, they hung on to Tanner Glass in the lineup way too long, despite what everyone saw on the ice and on the stat sheet. Anthony Duclair was yo-yo’d in and out of the lineup while Glass played each and every night. In the end it was J.T. Miller, not Glass, that forced the Rangers’ hand to send him back to the Q though.

The management of the defense has been pretty solid. They’ve been doing a good job of rotating John Moore and Matt Hunwick based on performance, which is all you can ask for.

I think I was fair with the grades, but I’ve been called a Hank apologizer in the comments a lot. Stay tuned for more midseason grades posts, as we will be doing more through next week.