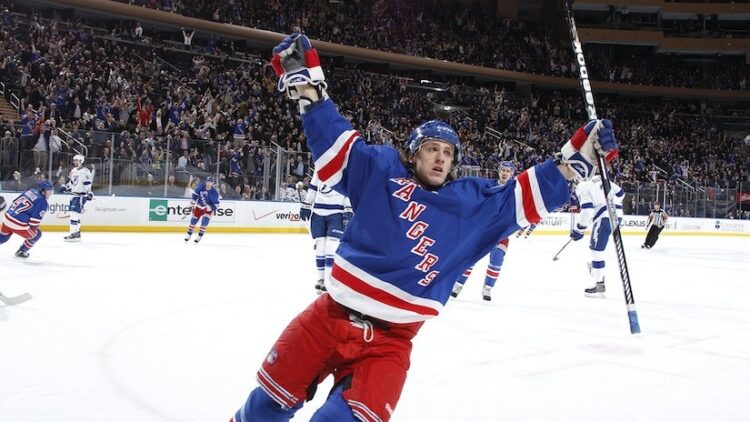 Continuing on with the mid-season report card, this is my take on the Rangers bottom six forwards. Dave covered the goaltending and coaches and Chris wrote about the top-six forwards previously, so be sure to check them out.

(ALL STATS ARE 5v5 UNLESS NOTED OTHERWISE)

Hagelin’s speed keeps opposing teams honest. He’s been very reliable defensively, a dangerous part of the penalty kill and has big playmaking potential 5v5 on the offensive side of things. Keep your eye on his name in trade rumors. He’s a free agent at the end of the year and with cap space tight after Marc Staal’s extension he could be a cap casualty. Hagelin has been a big part of the bottom six and will continue to be moving into the 2nd half of the season.

Coming in as a rookie who spent the majority of his final two years at Boston College playing right wing my expectations for Kevin Hayes playing center and making the team were tempered. He has exceeded mine, and I’m assuming most others, predictions in terms of his contribution to the Rangers thus far. Solid wingers on either side of him (for most of the year) have helped, but he still deserves credit. I expect a drop off in production due to a longer schedule than he’s used to, although he has proven me wrong up to date.

I like Jesper Fast’s potential. He’s got speed, he’s young and defensively solid despite lacking much offense. At this moment I do not view him as a third line player (where he’s been slotted most recently). On the fourth line he’s been hampered by his most common opposite wing mate. Fast has room to grow and if he’s put in the right situations down the stretch he could be a valuable member of the bottom 6.

Miller has his flaws. He tends to make a “big mistake” here and there (usually in the defensive zone) that overshadows all of the other positive things he does in game. Alain Vigneault is lukewarm on him for reasons I don’t agree with. To me, Miller has been nothing short of brilliant given his role thus far. As Dave has pointed out for months on end, he’s clearly suited to be a winger. If he can stay out wide and is given an opportunity off the 4th line, I expect Miller to be a big contributor in the 2nd half of the season.

Take a heavy dose of defensive zone starts, add an anchor to your left and what do you get? A positive CF%. Moore has been everything you could ask for and more out of your fourth line center. If Vigneault put out the optimal lineup night after night you’d see Moore flourish each 5v5 shift. All he does is play smart, consistent hockey. Expect nothing less the rest of the season.

Stempniak has been an absolute bargain for the Rangers. He drives play and has pretty good skill for a fourth line player. Dubbed as “Benoit Pouliot’s replacement” by many, he has not been that (nor did most of us expect him to be). Stempniak has however been a very solid contributor to the team and at a great price against the cap.

There’s not much left for me to say in regards to Tanner Glass. The evidence against playing him has been noted time and time again. He has no skill. He’s irresponsible defensively and offensively. He’s a liability every time he’s on the ice and yet he has still played 30 games this season. Glass does not help the Rangers win hockey games. If you think he does your priorities are misplaced. Glass makes the Rangers significantly worse night in and night out.