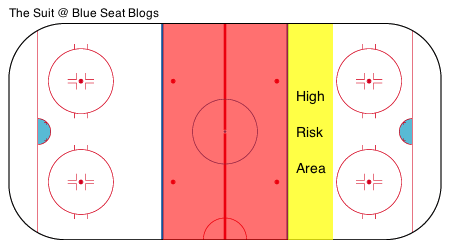 Everyone always wants to talk about whether or not teams should be dumping the puck vs. carrying or if teams are out- shooting (possessing) the opposition. In reality, these things are just outputs. They are the end result of how well a team is executing the process. For many teams, part of that process is their neutral zone systems.

The general consensus among 1-2-2 coaches like Alain Vigneault, is that the game is often won and lost in the neutral zone. Therefore, an extra effort is placed on designing tactics to win this part of the ice.

So what are those tactics?

Aside from forechecking strategies, which we have talked about a lot in the past, the two other fundamental systems employed in this area of the ice are neutral zone counters and regroups.

Often overlooked aspects of the game, the difference between counters and regroups is that counters are all about speed through the neutral zone, while regroups are more methodical and controlled.

Good counter teams want to quickly transition the puck through the neutral zone before the opponent sets up their forecheck. The idea is to create odd man rushes from turnovers. The Devils were the hallmark counter team during their runs in the 1990s and early 2000s.

Regroups are kind of like controlled breakout plays in that they are employed after the opposition has already set up their forecheck. In these situations, it’s less about quick transitions and more about pulling apart the opponent’s coverage with different routes and patterns.

For the sake of brevity, today we’ll just cover neutral zone counters, since they are typically a strength of AV’s system and something that has been missing in the early goings this season.

Similar to last season’s post about breakout plays under pressure, counters are fairly straightforward and relatively easy to follow. The most common counters in the NHL are Dump-in/Chip plays, Give and Go plays, and Mid-Seam passes. 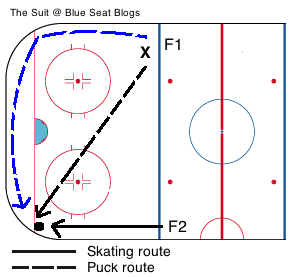 1) You avoid a neutral zone trap.

2) You’re betting that your wingers have a better chance of winning a board battle against the opposing offensive defensemen, who are usually smaller and not as strong on the boards as everyone else on the ice. 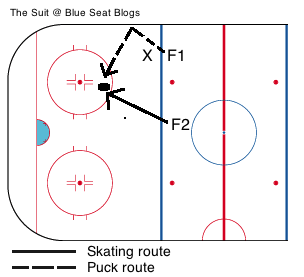 Strong-side dump-ins are usually played off the boards when the opposing d-man has a tight gap. The puck carrier can either try to get around the defense and retrieve the puck on their own, or play the puck off the boards for a linemate. Either way, the idea is to attack the stay-at-home defensemen who are usually slower and can’t pivot quick enough to retrieve the puck.

Give and Go Plays: 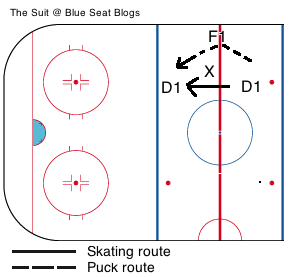 While dumping or chipping the puck into the zone is an effective strategy and will always have a place in the game, it’s not as sexy as making a play off the rush. In today’s game, plays generated off the rush are at a premium and give and go’s are one form of currency.

In AV’s overload system, two forwards usually forecheck and attack the same lane. With the forwards playing so close together, his system lends itself to more give and go plays, since they’re designed to be short and quick.

The key with these types of plays is for the puck carrier to recognize that after he dishes the puck, he instantly has to become a passing option. If the reads are made, you end up with more give and go plays and more up-tempo counters. 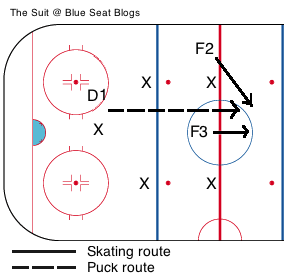 With the removal of the redline after the ’05 lockout, most teams now have their defensemen playing a tight gap up in the neutral zone, rather than back on their own blueline. While this helps to keep a tight check in the neutral zone, it also opens up some soft ice between the D and their blueline. This area is prime real estate to spring the rush with stretch passes.

During the Torts years, he often had Gaborik attack this area of the ice to split the D’s on counters. A typical play would involve Anisimov causing the turnover, then picking up the puck and firing a mid-seam pass to Gaborik up ice. Even if the pass wasn’t always there, it forced opposing Ds to back off their gaps, which opened up other areas of the ice for guys like Stepan, or even our own defense looking to join the play.

So those are the basic principles to neutral zone counters. It’s an often overlooked part of the game since neutral zone play in general typically isn’t picked up on a TV broadcast, and you almost never hear the studio guys talk about it. However, it’s an important component of what successful hockey is supposed to look like.

As the Rangers start to rebound, you can bet that successful counters and attacking the neutral zone with speed will be a driving factor.