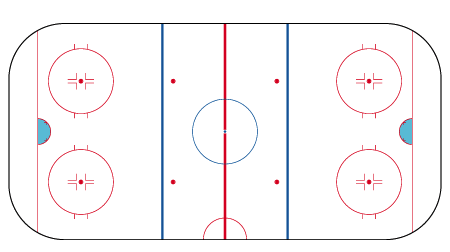 The jpg that keeps on giving

Over the past several years, we’ve talked a lot about hockey system basics like forechecking, defensive zone systems, and power plays, as well as different philosophies like ice-time distribution, line juggling, and the countless ways to tactically differentiate Alain Vigneault and John Tortorella. Believe it or not, there’s still a lot more to cover.

We haven’t even begun to scratch the surface on things such as entries (o-zone and d-zone), breakouts, regroups, counters, backchecking systems, face-off plays, etc. In other words, I hope you all still have a healthy appetite for this stuff.

Thanks to a request from loyal Blue Seat Blogs follower Tommy Tabasco (@ttabasco13), today we’re going to focus on breakouts. This was a good pick from Tommy since breakouts are such a crucial first step to generating offense.

When it comes to even-strength breakouts, there are essentially two different types: control breakouts and pressure breakouts.

Control breakouts are when your team has clean possession of the puck in the defensive end and the opposition isn’t forechecking aggressively because of a line change or they’ve decided to trap the neutral zone.  Breakouts under pressure are obviously the opposite. The good guys don’t have clean possession and the enemy is in deep aggressively trying to get the puck back.

For the purpose of today’s post, we are going to talk specifically about breakouts under pressure. They’re pretty straight forward and relatively easy to follow. There also isn’t nearly as much variation as there can be with control breakouts, which allow for more creativity.

The four most common pressure breakouts in the NHL are Wheel plays, Reverses, Overs, and Quick-Ups. If you listen closely to TV telecasts, or if you’re in one of the more quieter arenas in the NHL like MSG (yea that’s right, shots fired people), you can often hear the weak-side defensemen call out which breakout play to execute. 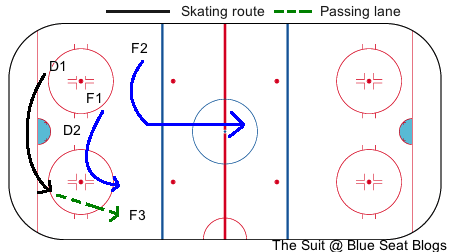 Basic wheel breakouts are fairly easy to pick up on TV. D1 will receive the puck on the strong side boards. Instead of making an immediate play, D1 will quickly round the net (hopefully having a stride on the forechecker) and quickly head up ice. All good wheel breakouts will have D1 cutting as close to the net as possible, almost as if he’s using the net as a screen.

In most cases, D2 will be playing in front of the net. F1 swings off the puck to support D1. F2 skates up the gut. F3 will be a board-side option if D1 can’t shake his forechecker. In most cases, you only want to call this breakout if D1 is a strong skater. In recent seasons, Torts often had MDZ executing this play. 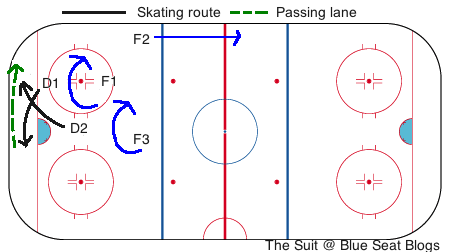 Reverse breakouts generally look like wheels from the outset, but instead of D1 rounding the net, he will backhand the puck off the boards behind him leaving it for D2 to pick up. D2 then retrieves the puck from behind the goal line and breaks out in the other direction.

This is a good misdirection play as the opposition will think they’re running a wheel play. There’s risk in this play as everyone else on defense has to know that they’re running it, since all of the forwards have to reverse their routes as well. They can’t bite early. 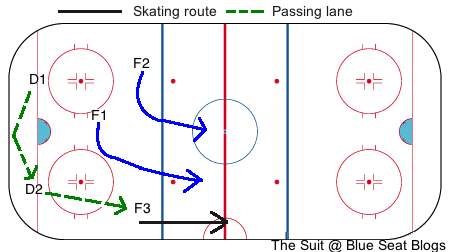 Every Rangers fan should remember this breakout. This breakout is frequently used to beat the strong-side overload, which is the system Alain Vigneault employs. In this breakout, D2 leaves the net zone and moves to the weak side corner. D1 will bank the puck off the boards to D2. D2 will turn and pass it to F3, who has also moved to the weak side of the ice.

The crucial part of this breakout is D1 cannot lug the puck towards D2 because that will cause the opposition to slide over like a foosball game, in other words, the pressure will follow D1 in D2’s direction. Instead, D1 has to quickly make that pass to D2 for this to work effectively. 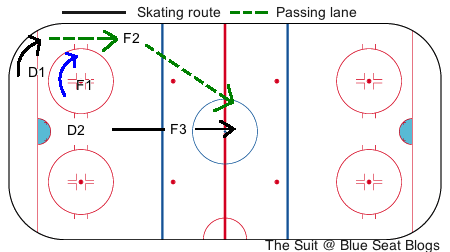 Quick-up breakouts are often what AV wants his guys executing. With quick-ups, D1 looks to make a quick pass up to F2 on the strong-side boards. F1 swings to support, but the next target is to hit a quick diagonal pass to F3 with speed.

The idea of quick-up breakouts is to catch the opposition when they’re forechecking hard. If done right, the good guys should theoretically get more transition rushes. When things are going right for the Rangers, it is often because they’re able to gain the blueline with speed. A well-executed quick-up breakout is what helps to get them there.

And one last gif.