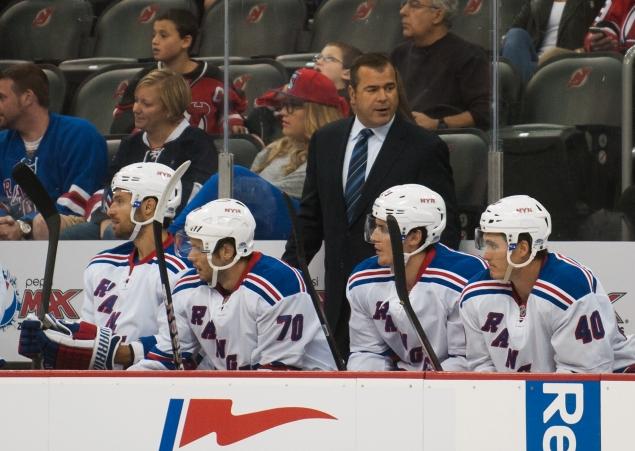 This is definitely going to be an interesting season covering NYR’s x’s and o’s, as coaching changes always bring about new looks and different styles of play. And while I was indeed a pro-Torts guy, I’m looking forward to seeing what AV and his staff have up their sleeves.

Today we’re just going to cover even strength play, since I know these tactic posts can get a little lengthy and I always prefer brevity over anything robust. Next week I’ll focus on the power play and the kill.

With that said, make no mistake. Although AV isn’t completely overhauling the way they play, there are some key differences. It’s going to take a while for everything to come together, so…hold fast.

If Tortorella’s system could be summarized into one sentence, it would be described as skating intensive and physical. AV hockey on the other hand is really about two things: passing and overloading. Although the execution has been inconsistent and sporadic in the early goings here, he definitely wants his guys making crisp passes and he wants them to be positionally outnumbering the opposition on one side of the ice.

If you look at the picture above, the Rangers first worked a moderately aggressive 1-2-2 forecheck. Also notice how all five Rangers are to the left of center ice (the drawn redline). The idea is to limit the opponent’s time with the puck and hopefully generate a turnover. Ultimately if a turnover can be created, it’ll likely be an odd man situation since their aim is to outnumber the enemy at all times.

The flaw in this setup is that you leave the weakside of the ice exposed. If the opposition is able to get a cross-ice pass through, it can lead to odd man rushes in your goalie’s direction, which is what we’ve been seeing since preseason began. However, everything just hasn’t clicked yet.

This is a different way to pursue the puck than Torts’ 2-1-2 spread forecheck, which was a very aggressive strategy. However, the 2-1-2 spread is more taxing physically since 2 or 3 guys are hunting the puck below the dots and need to make a hit to cause the turnover. With the 1-2-2 that AV deploys you only have one guy down low stirring it up, so the majority of the forecheck takes place a little higher in the zone.

When the Rangers don’t get the puck in deep, AV will have them be a bit more passive. The 1-2-2 will turn into more of a neutral zone trap, with one forechecker at the blueline, two forwards around the redline and two defensemen at the defensive blueline.

Although we’ll still see an aggressive forecheck under AV (depending on personnel and game situation), it will be more of an overload/stacked forecheck (forwards forecheck the same lane) rather than Torts’ traditional spread formation (forwards approach from opposite wings). 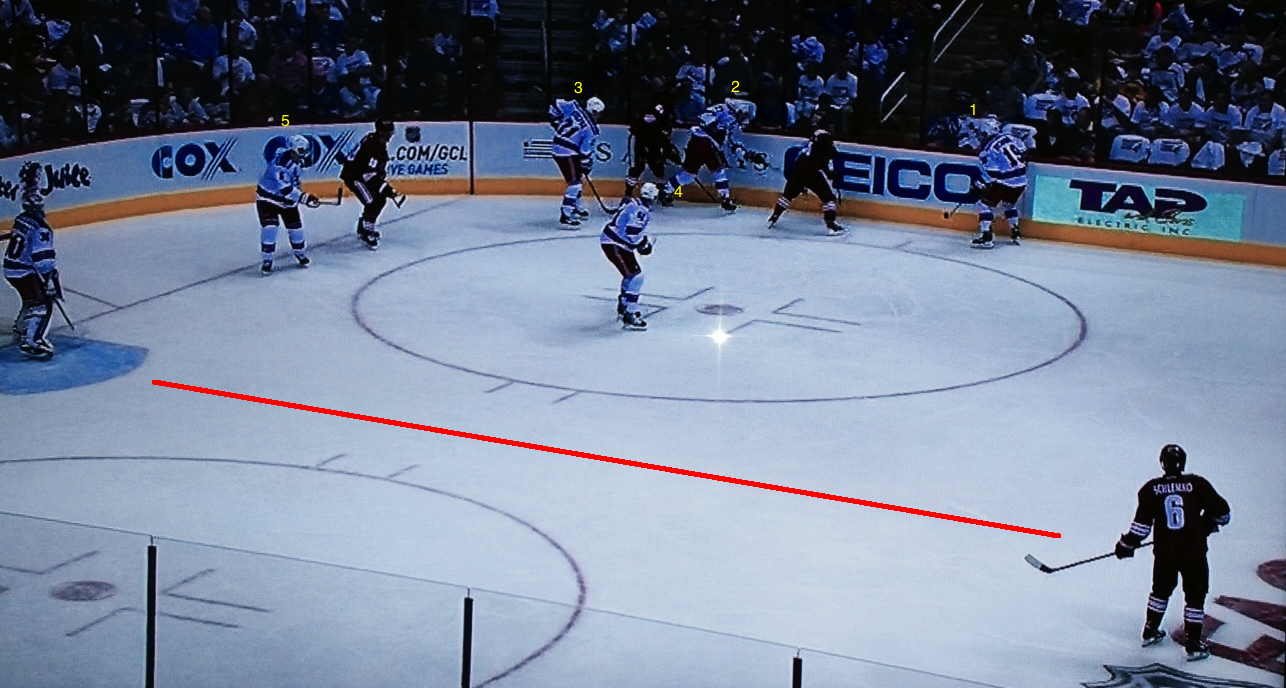 This too is a risky system because you generally will have two or three players overloading hard along the boards, with one skater playing just off the puck and one or two players playing zone defense in the slot, but also shading the strong side boards.

With the amount of switching of roles that goes on in today’s NHL, it’s easy to get confused with who should be where. Also, if the opposition is able to hit that cross ice pass to the weakside, then you’re likely giving up a quality chance to the enemy point man.

The key here is the weakside forward (in this case Rick Nash). He has to be able to get back to the middle to defend the slot if his teammates lose possession cleanly. The good thing about the overload defense though is that once you recover the puck, you’re in a good position to breakout with short, quick passing plays.

One thing to remember about the overload is that it is typically only employed when the puck is along the boards. Once the puck moves below the goal line teams tend to switch to either a zone defense or man-on-man coverage. AV seems to prefer the latter (man-on-man with the Ds and F1), while Torts preferred all five skaters playing a zone defense.

For more on those strategies be sure to read up here.

The one similarity between Torts and AV is that they both want to activate their defensemen in offensive situations. Both want their blueliners to be good skaters and looking to join the play.

I think our d-men will join the rush a little bit more under AV than they were under Torts, so you’ll likely see a few more four man rushes. However, this new system won’t need the defense getting in on the forecheck as much as the 2-1-2, which heavily relies on pinching D to keep the puck in the zone.

The biggest difference I see with the d-men is the outlet pass. It seems AV wants these guys to make short, quick passes up ice, rather than controlled breakout plays starting from behind our own net. Obviously opposition forechecking pressure usually influences whether or not you’re looking for a controlled breakout, but from the early goings the quick pass/give-and-go seems preferred over soft chips, D-to-D reverses, or even lugging the puck up ice.

Playing with the lead

A little further into the season now, and we’ve finally seen the Rangers get a few late leads. The Rangers tend to keep one or two forwards high in the third period if they have a late lead. It can still lead to more offense, but it will likely be offense created from neutral zone turnovers, rather than offense from heavy forechecking and pinches from our D.

Overall, some of these systems are a bit different from the previous regime. There’s been a lot of mental mistakes thus far since the boys definitely have to make reads and count enemy jerseys a bit more, but they’ll hopefully get it eventually.

While I certainly wouldn’t classify any of this as “wide open hockey” — which MSG Network keeps propagating for some reason — I do think most of this roster should have the ability to adapt to a different style of play. We shall see.