I’m sure some of you have recently heard John Tortorella describe the Rangers as a “defense-first” team. Obviously this is causing some confusion among our fanbase, since most people tend to understand the term as a way of describing neutral zone trap teams (e.g., Yotes, Bruins, Devils back in the day).

When Tortorella says defense first, he is referring to wanting his players to be defensively responsible, hard on the backcheck and aggressive on the forecheck. Yes, forechecking is part of defense because you don’t have the puck.  These are consistent themes for most hockey clubs.

This is a very different definition than the “defense first” label the media communicates. They often use this term against Torts and blame it for stifling the team’s offense. Except, lack of offense isn’t caused by a system, it is the result when a system isn’t executed.

Look, most members of the media can’t break down the x’s and o’s. Instead, they’ll throw vague terms at you like ‘run & gun’, ‘defense-first’, or ‘not a 60 minute effort’, etc. because it is a quick way to label a team without explaining the details. If you wish to understand the game’s details beyond vague labels, I humbly suggest you read all of our hockey systems coverage.

With that out of the way, let’s focus on what kind of system John Tortorella actually employs. 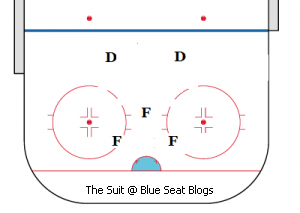 The Blueshirts generate most of their 5-on-5 offense from an aggressive 2-1-2 spread forecheck (shown above) and transitional offense, meaning offense generated from the rush. The 2-1-2 spread relies on skating, puck pressure, and pursuit from all five skaters. Some coaches use a variation of this forecheck where F1 and F2 approach from the same lane, rather than spread out like the image shown above. This system helps produce grade A chances by winning puck possession battles below the dots, but it’s on the players to find twine.

Defensive oriented teams, or conservative teams, generally do not send two or three forwards in deep after the puck. Hybrid trap teams will sometimes forecheck aggressively, but generally will do so only until they have a lead. Once they have the lead, they tend to drop guys back and plug up the neutral zone in those 1-4 or 1-3-1 formations. This is a major tactical difference between those who always encourage puck pursuit in the offensive zone (think Torts or Bylsma) and those who do not (think Hitchcock or Lemaire).

More passive teams also typically do not give their offensive defensemen free reign to pinch, forecheck, or join the rush. They are much more conservative with their blueliners. The Rangers are the opposite. Torts certainly wants his defensemen to get involved offensively, so long as someone covers them. If you don’t believe that, then you haven’t ever watched Michael Del Zotto. He is as aggressive as it gets. 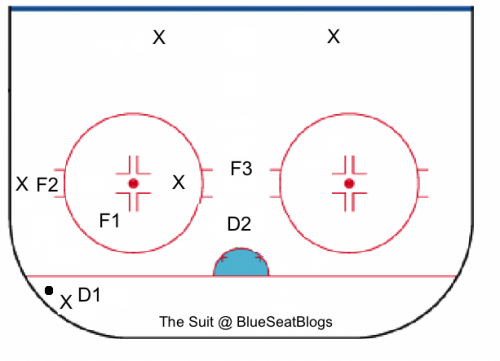 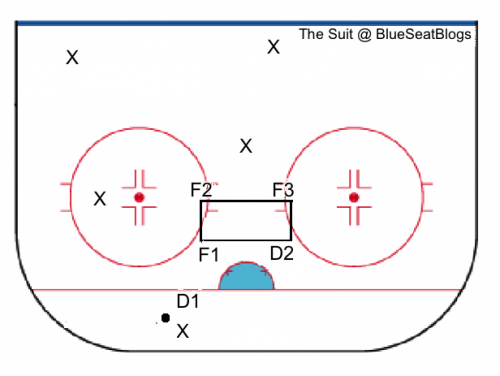 The defensive zone is where things get a little muddled when it comes to labeling a team. Up until a few year years ago, trapping teams were really the only teams who collapsed in front of their net and blocked shots. More aggressive teams sent two forwards towards the blueline playing man-on-man coverage, or would let one forward cherry-pick in the neutral zone.

Times have changed and defensive zone play has gotten more sophisticated. In today’s NHL, more and more teams are collapsing to the net and blocking shots regardless of their overall forechecking strategy. Point in case, during the 2001-02 season 10 teams blocked over a 1,000 shots. Last season all but two teams blocked over 1,000 shots.

The media likes to use this strategy and blame it for stifling offensive ability, but the reality is a number of high scoring teams play the low zone collapse. The Capitals, Blackhawks, Bruins, and Penguins have all used this strategy in recent seasons and they have no problem scoring goals.

There are other defensive zone strategies, such as the overload, man-on-man, etc., but the low zone collapse is probably one of the more employed strategies in the NHL as it prevents other teams from generating grade A chances. The Rangers mostly use the low zone collapse, but will overload on occasion depending on certain game situations.

For more on hockey systems, be sure to check out my entire series here.