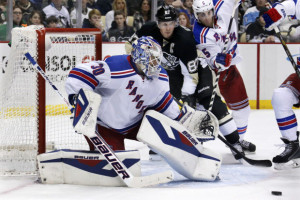 It covers Crosby, or else it gets the hose again.

Now that this nonsense with the Flyers is finally over, the Rangers head to the Steel City to take on the Metropolitan Division Champion Penguins. Pittsburgh was given a run for their money by an upstart New York Rangers Columbus Blue Jackets team, who came up just short in their wild six-game opening round series.

These teams last met in the 2008 playoffs, where the Blueshirts were dispatched in five games. That was pretty much an entirely different roster, so recent history doesn’t tell us much. Obviously, the key to this series will be to keep the Pens’ stars in check as much as possible, and try to take advantage of the suspect defense and goaltending of the Penguins.

As you would expect with an offense lead by Sidney Crosby and Evgeni Malkin, the Pens are a dynamic offensive club. During the regular season, they finished 5th in the NHL with 2.95 goals/game. Coach Dan Bylsma has his front line running an aggressive 2-1-2 forecheck with an emphasis on puck pursuit. They run a familiar 1-3-1 powerplay set-up, which was tied for the top conversion percentage in the NHL at 23.4%. Incredibly dangerous.

Not surprisingly, Sidney Crosby remains the teams leading scorer and most potent offensive threat. While he is yet to score in these playoffs, he is not a player to sleep on, or you could come to regret it quickly. None of which is to mention Evgeni Malkin, James Neal, Chris Kunitz, or Kris Letang, all of whom can bury the biscuit at anytime. Common line combos:

The Penguins are actually structured fairly similarly to the Rangers, with three lines that can drive the offense and one, dedicated 4th defensive line. A little top-heavy, but definitely a handful up and down the lineup.

The Penguins’ defense, while not their strong suit, is far superior to the unit we just witnessed in Philly. Pittsburgh finished 10th in goals against/game at 2.49, but they have limited skill-sets that can be exploited. Word on the street is that bruiser Brooks Orpik is still not ready to go following a mystery injury suffered in Game 4 against Columbus. As a result of that injury, everyone moves up a rung, with Robert Bortuzzo taking the vacant roster spot.

Byslma employs a system that helps to hedge against the fact that his better defensive guys often appear to be skating in concrete and that their more mobile D-men are more wingers masquerading as defenders. Working with a zone defense, it allows Pittsburgh’s blue line to remain relatively static, while breaking up lanes and protecting the slot. There is a shot-blocking emphasis to help take some of the pressure off of Marc-Andre Fleury when opposing teams are sustaining in-zone pressure. Tentative D-Pairs:

The Penguins are also not a great puck-possession team based on FF% (Fenwick For %), ranked 16th during the regular season at 50.2%. For reference the Rangers were ranked 6th at 53.6%.

With the absence of Orpik, the Pens don’t really have a shut-down pair. This could open up some extra room depending on matchups for guys like Nash, St. Louis and Zuccarello.

I wrote a pretty comprehensive style analysis for Marc-Andre Fleury back in 2012, so feel free to revisit that here. At this point the only real addenda to that analysis is that Fleury has clearly had some confidence/other mental issues in the past few playoffs, and there still seems to be some lingering effects this year.

Additionally, in contrast with fellow Canadian National, Carey Price, Fleury moved away from his technically gifted foundation and started to rely more on athleticism. It could just be that he doesn’t really trust himself to let the puck hit him after the past few playoff meltdowns, or just that he feels more confident playing more on by the seat of his pants. Either way, I’m sure The Suit will be more than happy to see him at the other end of the rink.

We briefly covered the Penguins top-ranked powerplay in the offensive category, but what often gets overlooked is their 5th-ranked penalty kill. Bylsma runs a traditional diamond formation, with an emphasis on protecting the slot and blocking shots. Considering the Rangers absolutely brutal power play showing against Philly (who also didn’t have a bad PK, ranked 7th in the league), they will definitely need to up the ante against a slightly more accomplished Penguins PK unit.

Ultimately, for the Rangers, this series will be about exploiting Pittsburgh’s weaknesses while not allowing the Pens’ big guns to get any traction. If they are able to keep Crosby and Malkin quiet (hello, Mr. McDonagh and Mr. Girardi), they have a very good chance of using their balance and depth to throw Pittsburgh off their game. If they take too many penalties or find themselves allowing the big guys to pile up points, it could be over in a hurry.