Last week in my NHL fan guide to Olympic hockey, I briefly spoke about how systems on international ice can be a bit different than what we are used to seeing in North American rinks. After watching much of group play, we’re starting to get a sense of how teams are tactically approaching their opponents with the extra 15 feet of ice.

If there’s one common denominator in many of these games, it is that there’s still not a hell of a lot of room out there, especially in the neutral zone. I expected a lot of trapping from the Latvia’s and Slovenia’s, as overmatched teams generally employ such systems. However, even top teams like Canada, Sweden, and Finland are using these same conservative structures.

Below I’ve compiled a couple of screen grabs of these defensive formations. Although the teams are different, as well as the game situations, the general theme is the same – defense first. 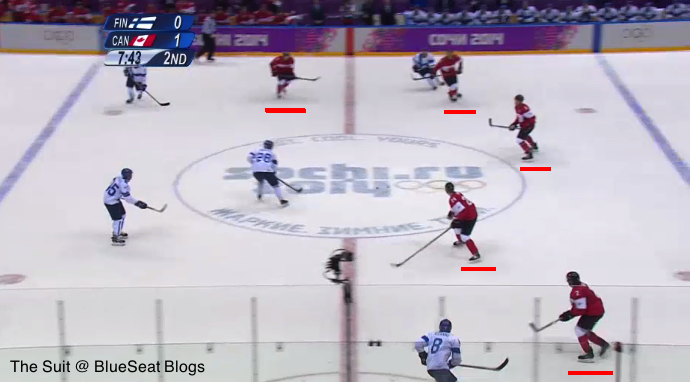 Above we have Canada employing a 1-4 neutral zone trap with a 1-0 lead with just under 8 minutes left in the 2nd period. I’d expect Canada to lock up the ice with a late lead towards the end of the third, but not with 27 minutes still to play.

I was pretty surprised Canada went this route with all of that talent. With that said, they haven’t looked quite right just yet and Babcock has been forced to juggle line combos and play defensive hockey.

Same game, tie score early in the third period, Finland is executing a retreating 1-3-1 defensive trap. Guy Boucher employed a more static version of this system while coaching the Tampa Bay Lightning. The general idea here is to force a turnover or a dump in. 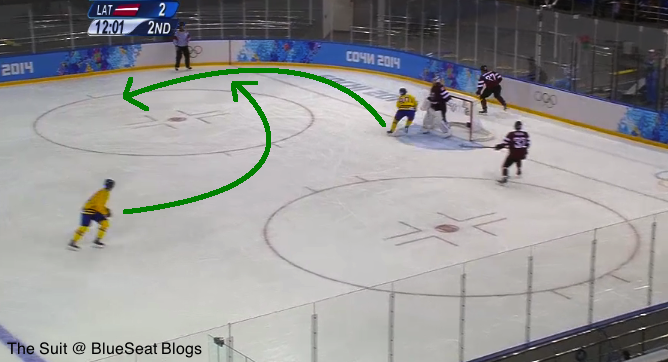 Sweden surprisingly had a tough time with Latvia this past weekend who brought a pretty aggressive forecheck.  In the picture above, Tre Kronor is working a rotating 1-1-3 lock where F1 and F2 kind of circle each other as drawn out above, while F3 drops back along the redline with the defensemen. This is a version of the leftwing lock rarely seen in the NHL.

The first forechecker in, Marcus Johansson (#90), swoops in and follows the play up the boards making a hit on Latvian defensemen Oskars Bārtulis (#37). Oskars plays the puck back down the boards to Artūrs Kulda (#32) who is trailing the play. The high Swedish forechecker (Jimmie Ericsson) swings down and makes a hit on Kulda. Johansson circles back up top and replaces Ericsson’s spot. The process repeats until they can get a turnover. 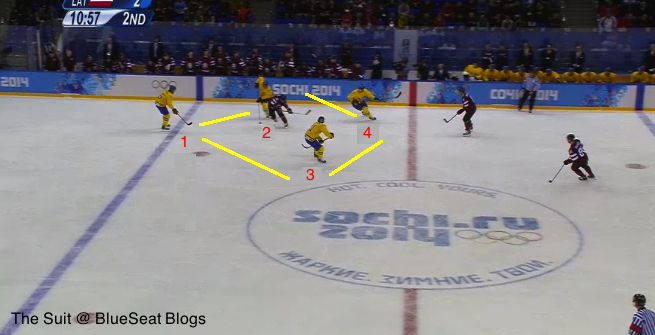 Later in the second we see Sweden employing a very defensive neutral zone strategy. Above you see four Swedes overloading one-fourth of the the neutral zone. Here we have three forwards and one defensemen collapsing around Latvian forward Janis Sprukts in a successful attempt to turn the puck over in the NZ.

As the knockout round begins and games start to count, I’d expect to see more defensive structures like these. The key for the US, who has employed more North American tactics thus far, will be about finding ways to break through these conservative formations. If they can’t, their power play will have to be extremely efficient.

Hold on to your seats kids. Games are about to get real tight.