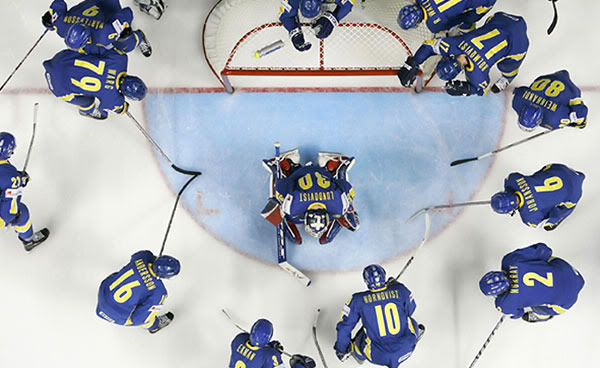 The 2014 Winter Olympics in Sochi are underway and soon hockey fans from around the globe will be treated to the best ice hockey tournament not named the Stanley Cup playoffs. For the 5th straight Winter games, NHL players will officially be allowed to participate. And as a result, expectations for gold are highest around Canada, Sweden, the US, and of course the host country – Mother Russia.

Tracking the quest for gold is always the main reason for following the Olympics. However, this year in particular there are quite a few other narratives that are equally compelling and definitely worth waking up early to watch.

Before we get into the games I circled, let’s revisit the basics. First, a quick reminder of the groups:

Men’s hockey will kick off this Wednesday at 11am EST with the Czech Republic facing Sweden. USA’s first game will take place vs. Slovakia on Thursday at 7:30am. They will square off against Russia on Saturday at 7:30am. In other words, put your Valentines to sleep early Friday night.

With that out of the way, let’s focus on several interesting plot lines heading into this week’s tournament.

The fate of Norway rests on The Hobbit’s shoulders

In 2010, little known Mats Zuccarello took North America by surprise when he dropped a goal and an assist vs. Marian Gaborik’s Slovakia. Although Slovakia won the game, Mats helped Norway push them to the brink, forcing a 3-3 game heading into the third. Zuke’s all around play paved the way for him to join the NHL.

Four years later, the hopes of Norges rests on MZA’s shoulders, as he is the only NHL player on the roster. Fortunately, they are one of three teams in the Olympics to only be featuring one NHLer, the others being Slovenia and Latvia. The pressure though is on MZA and his Polar Bears to follow up their 2010 performance with perhaps a spot in the quarterfinals.

Key Game: Norway vs. Finland on 2/14 at noon EST on MSNBC. The Nordic Wars, a must win for MZA.

A sleeping giant in Switzerland

Traditionally, Swiss hockey always got overshadowed in Europe by Sweden, Russia, and the Czech Republic. In 1998 the Swiss didn’t even qualify for the Olympics. In 2002 they finished 2nd to last, but times are a changing.

Strong national teams are often fostered because of strong domestic leagues. Across the pond, perhaps no league is stronger right now than Switzerland’s National League A (NLA). The most attended hockey league in Europe the past few years wasn’t the KHL in Russia, or even Sweden’s SEL. It was the NLA.

Higher attendances lead to higher revenue and higher revenue means more investments back into the sport of hockey. It’s paying off. This year’s Swiss National Team features a very deep roster with eight players currently in the NHL, up from only two players in 2010.

Anze Kopitar being named to Slovenia’s team was obviously no surprise, as he is the only NHL player on the roster. What did come as a surprise though was that Anze’s brother, Gasper Kopitar, didn’t make the cut despite having helped the team qualify for the Olympics for the first time.

Even more surprising, the team is coached by their father, Matjaz Kopitar. That has to make for some awkward family dinners. No goulash for Gasper!

Key Game: Slovakia vs. Slovenia on 2/15 at 3am EST on MSNBC. Beat the country that stupid people will likely confuse you with.

The idea that there will be a different style of play on an international size rink (200 by 100) vs. NHL size (200 by 85) is certainly not a unique thought. However, most of the focus at this point has been on the players because of the extra time and space they will have with the puck. What I’ll be looking for though is how the coaches adapt.

Hockey systems on the big rink can be very different from what we’re used to seeing. Heavy forechecking, dump and chase, ramping up shot-attempts (aka Corsi/Fenwick events), etc. are all North American concepts.  In Europe, you tend to see more overloads, east-west breakouts, and neutral zone traps. It’s not uncommon to see an 0-5 forecheck, which has been extinct in the NHL since the ’05 lockout.

Speed through the neutral zone is going to be key for the US and Canada. Breakouts will have to be different. Coaches will need more regroups in their arsenal than they’ve ever had in the NHL. It will be a different game. Can internationally inexperienced coaches handle it? We shall see.

Key Game: Finland vs. Canada on 2/16 at 12pm EST on USA Network. A potential upset game for our northern neighbors.

Russia not medaling in Vancouver and Turin was a big deal, especially since they are always a favorite to win the Gold. To make matters worse, Canada embarrassed Russia in the quarterfinals losing 7-3. Ovechkin finished the tournament with 2 goals and 2 assists in Russia’s four games.

Although the team features plenty of notable stars like Malkin, Kovalchuk, Bobrovsky, and Datsyuk who’s actually captaining the team, for better or worse all fingers end up getting pointed at Ovechkin. Losing on Russian soil will not bode well for his legacy.

According to The Washington Post, Capitals coach, Adam Oates had the following advice for Ovie, which I thought was great message.

“You can’t control your coach, you can’t control your line mates, your teammates, how much you’re going to play…All you can control is how you play.” “You’ve got to go over there and be the fastest, hardest working guy you can possibly be because that’s what they’ll remember…I just want him to come out feeling like he left it on the table, he did the best he could possibly do.”

The pressure and scrutiny on Ovie is almost unfair given their team’s balance and depth, but it will certainly make an interesting narrative to follow.

Key Game: USA vs. Russia on 2/15 at 7am EST on NBCSN. For the group stage, it doesn’t get bigger than this.

For the complete Olympic hockey schedule, check out our page here.