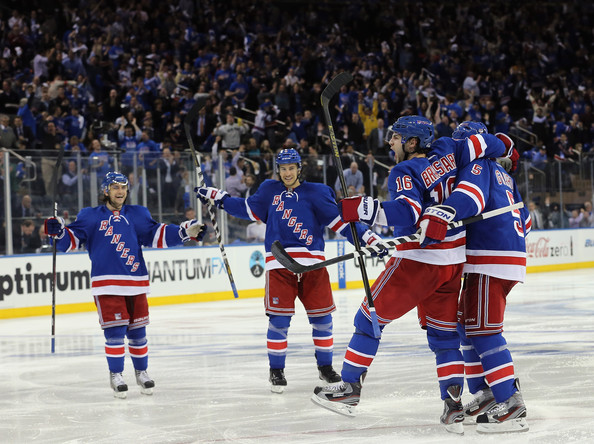 It’s no secret, the biggest problem the Rangers have had the last several seasons is the lack of a respectable power play. Not since the 2009-10 season have the Blueshirts finished in the top half of the league in PP conversions, and not since the 1998-99 season have the Rangers had a top 5 power play. Although it’s still a bit early to call our current power play elite, or even a team strength, you have to like what assistant coach Scott Arniel has done with the man advantage in the early goings.

To date, the Rangers have converted on 20% of their power plays, good for 13th in the league. The boys are doing all the right things on the advantage like player movement, puck movement, setting screens, and getting pucks on net from all areas of the ice. If they can keep it up, I can see this power play being really good for the first time in a very long time. 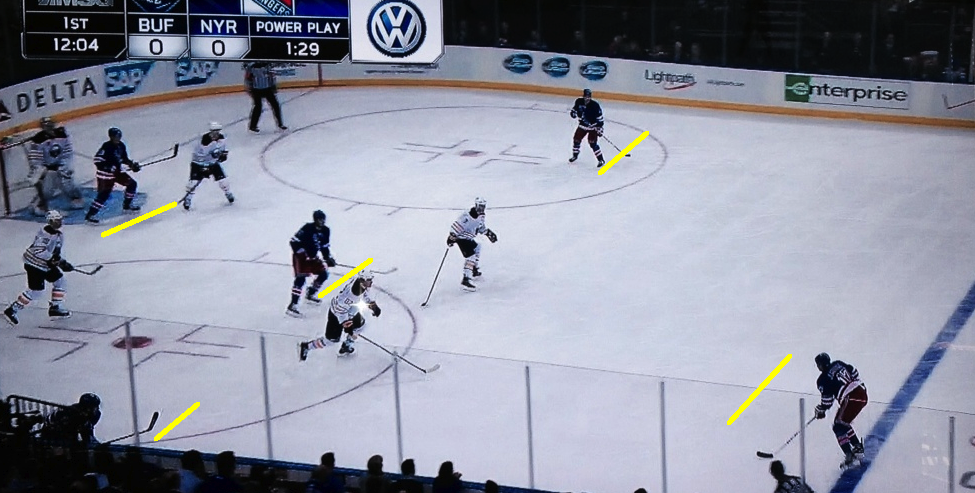 Interestingly enough, Arniel is running a 1-3-1 power play system (shown above). This is the same setup Sully had implemented during a hot streak late last season when they converted at a 27% efficiency rate. Of course, they couldn’t maintain that success and the PP went south again during the playoffs. Fast-forward to this season and the 1-3-1 is working again and it’s proving to be the right power play formation for this group.

For those of you unfamiliar with the 1-3-1, it’s one of the newer formations that came out of Europe, but became popular in the NHL after Guy Boucher had success implementing it in Tampa Bay. Note that this is different than Boucher’s 1-3-1 neutral zone trap. Anyway, what’s unique about this setup is you can quarterback it from the point, at either half boards, or below the goal line. Most other power plays distribute the puck from one general area of the ice, so this setup gives you several different looks.

The other thing I like about the 1-3-1 is there are essentially four triangles within this formation to pass around and take one-timer shots. With that many options you can really get creative with coming up with a variety of plays within this structure and keep the defenses guessing.

Other common power play systems like the umbrella, the 1-2-2, the spread, etc. rely on more basic plays built around point shots, screens, cycling, and crashing the net. All are sound strategies, but with more options in the 1-3-1, it’s a tough system to defend against. Right Islanders?

The only negative with this system is there’s only one player patrolling the point, so you really need someone who is calm under fire and comfortable handling the puck with high pressure. A threat of turnovers at the blueline keeps a lot of teams, especially ones who lack great speed, from utilizing this system. It’s just too risky. In my opinion, although we lack an elite PP QB, I’ll gladly take a higher PP conversion rate in exchange for Hank having to stop the occasional shorthanded rush.

The other thing to keep an eye on is personnel. The best power plays usually have 2-3 right-handed shots. Lately we’ve had zero to one right-handed shot out there. Eventually that’s going to have to balance out because a lefty on the left side of the ice doesn’t have an inside shooting lane. Girardi isn’t that guy. Cally’s more of a slot guy. Stepan is really your lone right handed option.

In the end, good systems are just part of the success and obviously the players need to execute. So far this season we’ve been doing exactly that and it’s helping Arniel keep some of these units together and not changing combinations or systems at the first sign of trouble. Hopefully the Rangers can continue to build upon this success and show us they can convert against the league’s top teams.

For more on hockey systems, or if you missed my breakdown of AV’s system at even strength, or Tortorella’s systems, feel free to click these links.