Previewing the Caps and their styles of play 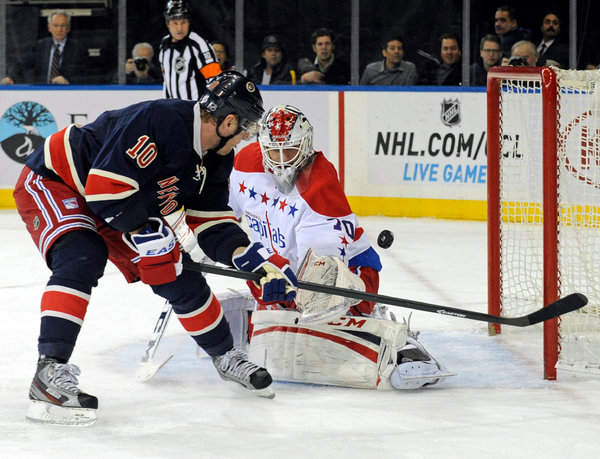 As Suit said this morning, the Rangers and the Caps are meeting in the playoffs for the fourth time in five years. Last year, the Caps took the top seeded Rangers to a seventh game under Dale Hunter, who is now departed. Replacing him was Adam Oates, who took a unique style of coaching with him to Washington, and after a slow start, the Caps picked it up and ran with it.

This is not the same Caps team that the Rangers went 2-0-1 against. These Caps are 11-1-1 in April, and 15-2-2 over their last 19 games. They have been clicking on all cylinders, and really adapting to Oates’ hybrid systems. While there is generally an adjustment period to a new coach and a new system, the Caps full adjustment has made them the hottest team in the NHL heading into the post season, and teams are having trouble defending their hybrid schemes.

The Caps essentially run two different forechecking systems, sticking mainly with a 1-2-2 forecheck. Generally speaking, a 1-2-2 is a bit of a passive trapping system, but the Caps use it more aggressively, sending one player deep and leaving two players near the faceoff circles to capitalize on turnovers. Where the Caps really throw a wrench into opponents’ breakouts is when they send a second player deep and switch to a 2-1-2. The Rangers run a 2-1-2, but they do not slide into a 1-2-2 unless they are in the middle of a line change. That is the true difference with the Caps, is that they adjust based on score, puck location, and game situation.

The Caps continue with their hybrid scheme here, as they run a combination of a strong-side overload and a low zone collapse. The basic premise of the strong side overload is to outnumber the offensive players along the half boards, take the puck away, and transition to offense. If the opposition manages to get the puck to the weak side or below the goal line, the Caps will then switch to a low zone collapse, which clogs the middle and takes away shooting lanes by blocking shots. The Rangers mostly play the low zone collapse, but will overload on occasion depending on certain game situations.

The Caps are one of those skilled teams that is able to switch between powerplay schemes seemingly at will. This is one of the reasons why their 26.8% conversion rate is tops in the NHL: They switch it up and keep the opposition guessing. Generally, the Caps will use a 1-3-1, which creates a lot of passing and one timer opportunities, but is susceptible to a short-handed rush in the event of a turnover. When the Caps don’t run a 1-3-1, they switch to an umbrella, something most Ranger fans should be familiar with.

Interestingly enough, the Rangers — who have played the umbrella powerplay since John Tortorella took the reins — have recently started switching to a 1-3-1 when appropriate. The Caps are much more skilled, which is why they convert at such an absurd rate. That said, they don’t face goaltenders like Henrik Lundqvist on a nightly basis.

Continuing with the hybrid theme, the Caps again run multiple different penalty kill styles, but the difference here is that almost every NHL team runs different penalty kills based on their opponent’s style. Generally, teams will cycle between a diamond, a box, and a wedge+1 depending on puck location and powerplay setup. The Rangers are no different from the Caps here, but the Caps are far worse (77.9%), likely because they don’t have Hank in net and they tend to over-commit on the puck carrier.

As Suit mentioned this morning, the Caps are a tough draw for the Rangers. They are red hot, and they have a great coach in Adam Oates who really changes things up and makes it difficult for the opposition to predict. These are not the same teams that played to a seventh game last postseason, and it’s unclear who really benefits from that. One thing we do know is that these are not the same Caps that were outscored 8-4 by a Rangers team who had still not found their scoring groove at the moment.

For more on hockey systems, be sure to check out Suit’s chalk talks.